AMD has finally lifted the lid on its Ryzen 6000 series mobile chips and the core 6nm design is far more than just an optical shrink. The resulting “massive increase in yield” means far more CPUs spilling out of TSMCs foundry, which can only help an industry in a chip supply crisis.

These Zen 3+ CPUs are going to be making their way to gaming laptops soon, and promise great things for notebooks this year. Intel’s Alder Lake mobile CPUs are also going to be dropping at the same time, plus we’ve got Nvidia’s mobile 3070 Ti and 3080 Ti to look forward to as well. If you’ve been putting off getting a new mobile gaming machine, then your patience should pay off nicely.

There are several reasons why Ryzen 6000 is worth keeping an eye out for, not least of which is a focus on energy efficiency, equating to better battery life and higher performance, but also as it’s the first time we’re going to be getting RDNA 2 integrated graphics in a laptop CPU.

The key takeaway is: You’re really not going to need a discrete GPU in your laptop if you’re partial to some on-the-go gaming.

Those efficiency improvements mean that AMD is offering 8-Core, 16-thread chips across the whole laptop stack—from 15W parts aimed at thin and light laptops all the way up to beefy 45W CPUs like the Ryzen 9 6980HX that you’ll find in traditional gaming powerhouses.

There are some impressive technologies driving these improvements, with AMD’s long-standing relationship with TSMC bearing fruit in it using the company’s 6nm production process. In a round-table deep dive on what makes AMD’s Zen 3+ tick, AMD’s Joe Macree explained  that “6nm is a fundamental enabler for this product.” 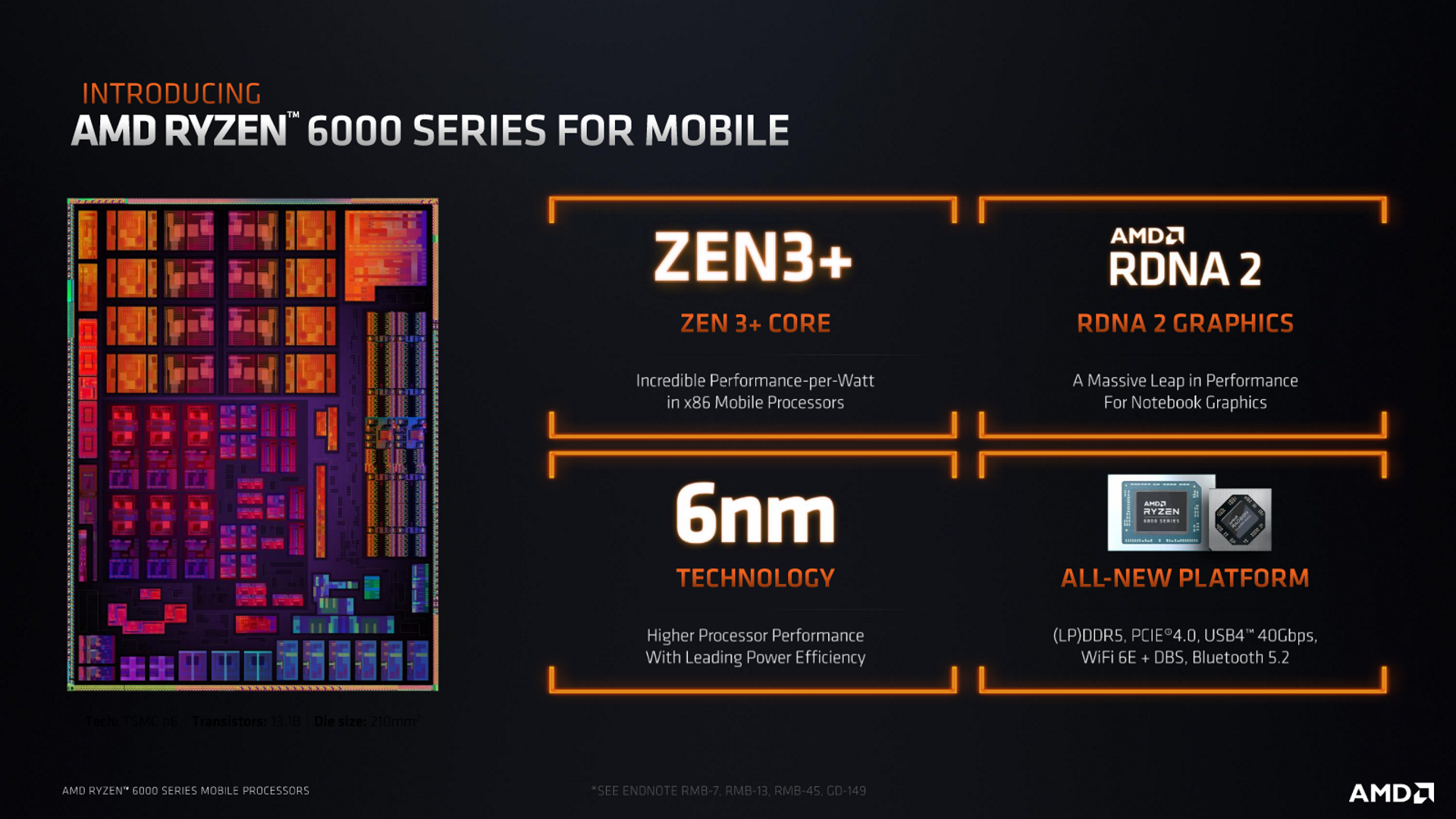 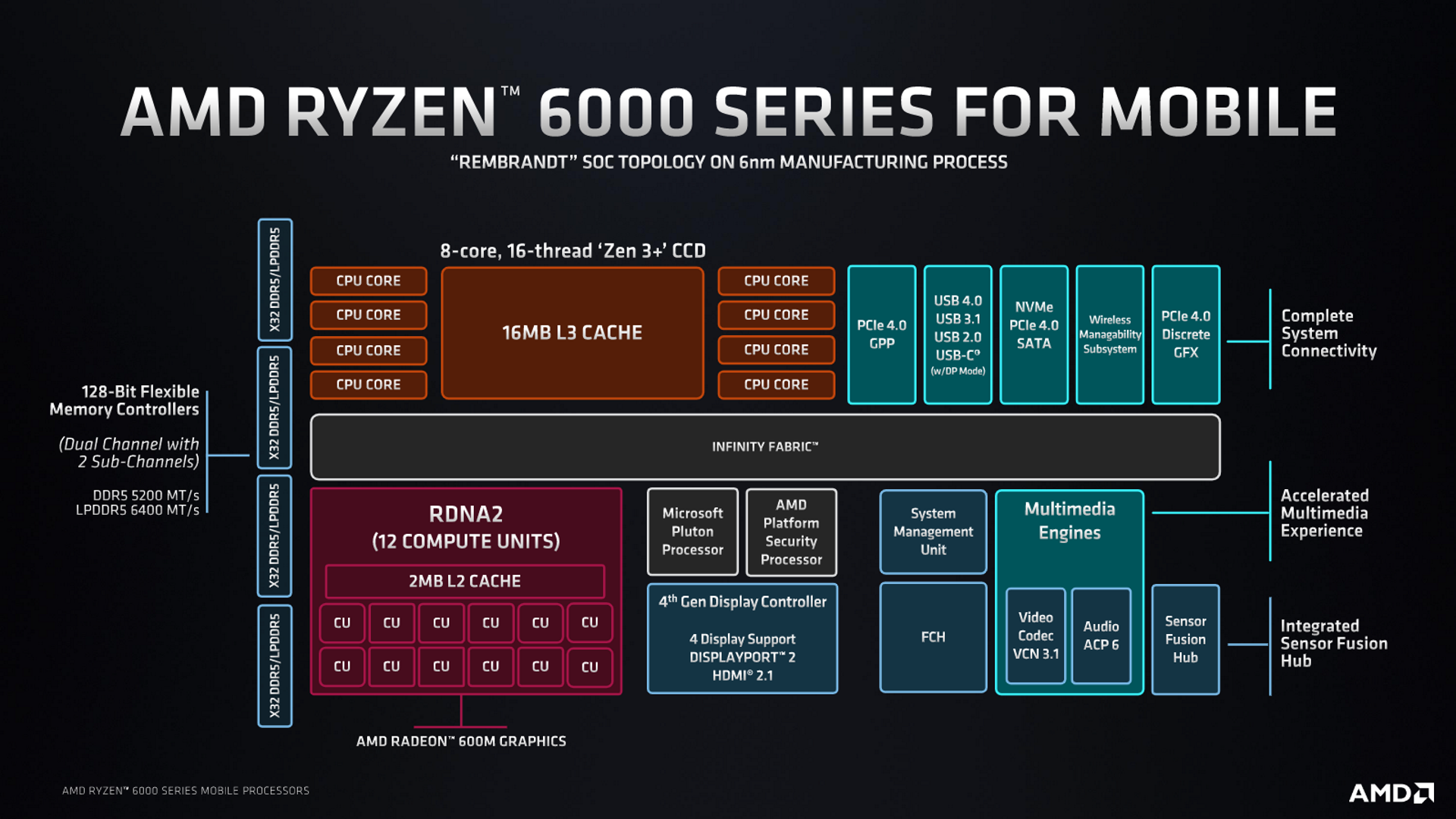 It’s not just a simple die shrink either, there are some vital underlying improvements that will help on the yield front too. As Macree expanded, “6nm may sound like it’s just an optical shrink from 7nm but it’s not. We’re bringing EUV technology to 6nm. We’re combining immersive transmissive technology for some layers and then EUV, which is a reflective technology, for the finest lithography layers.”

“Where we needed four mask steps or maybe more to be able to print out a metal wire or device we can now do it in one. The big upside of it is that when you’re reducing multiple steps to a single step we get a massive increase in yield. 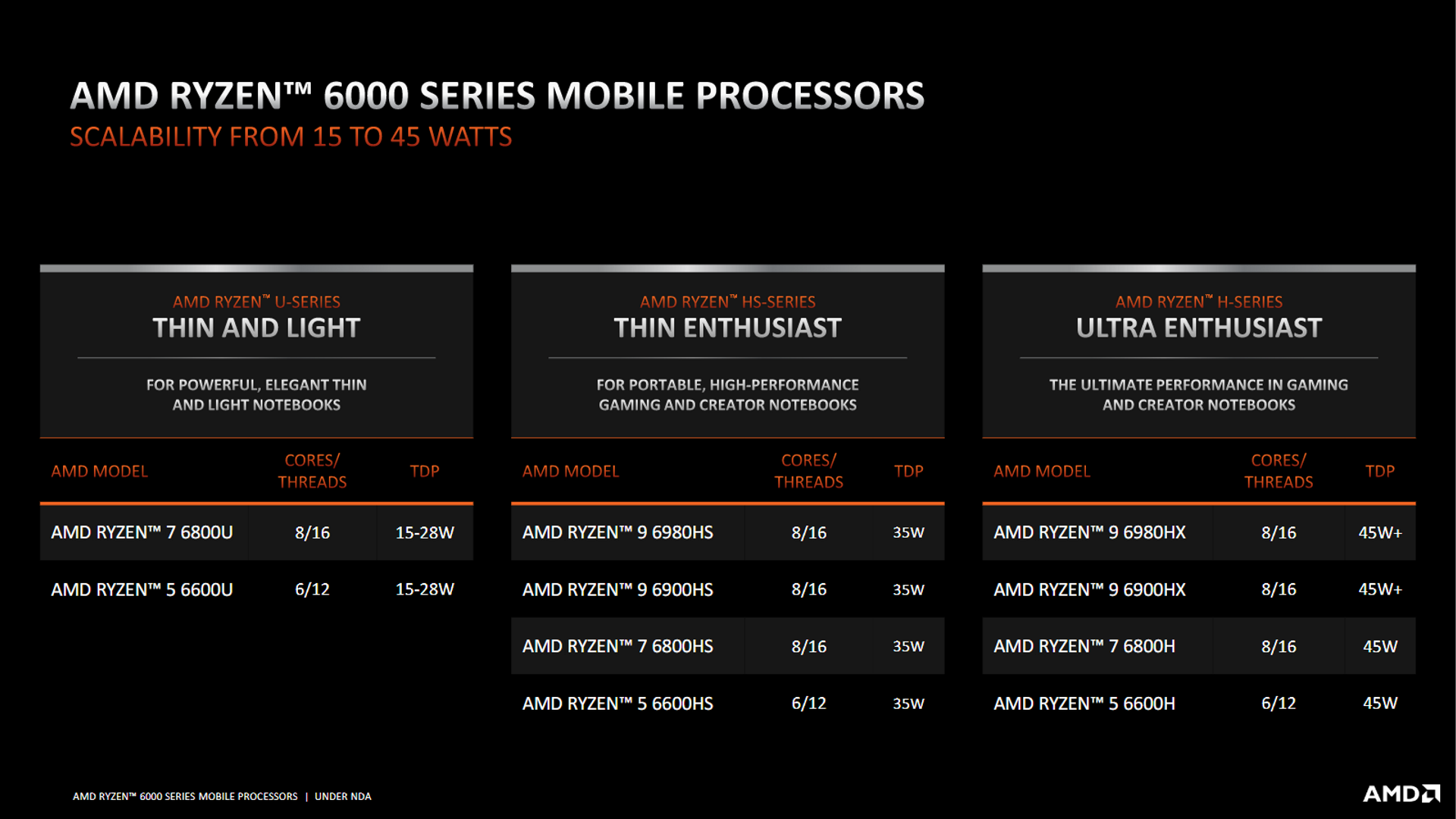 “And that yield results in better predictability, more uniformity, and also the ability to produce a lower power part because of that uniformity helps us manage costs.”

Combine this info with the Ryzen 6000’s die size of 210mm², and AMD should reliably be able to produce a lot of chips from each wafer. And that means we should see plenty of CPUs for laptop manufacturers to build machines around. Everything from thin and lights with decent RDNA 2 integrated graphics all the way up to those gaming beasts with discrete GPUs.

It looks like 2022 really is going to be a great year for gaming laptops.