Wordle, am I right? We know it. We love it. We’re… probably a little tired of hearing about it on a daily basis, honestly. But we do love it! Great game.

And as with anything that suddenly becomes a massive hit and part of the cultural landscape, there are plenty of enterprising souls trying to make a buck by riding that wave. There’s not always something wrong with that (as long as you’re not trying to sell a cloned Wordle app), especially in the absence of official Wordle merchandise. If you know someone loves Wordle, you might want to buy them a Wordle shirt or mug or stickers or something. If there isn’t official Wordle gear, you might look elsewhere.

But in the rush to get off-brand Wordle merch to market, there seems to be a fundamental misunderstanding of what Wordle actually is and how the word game works from some of these sellers. Once you’ve completed today’s Wordle please follow me into the pit of bad unofficial Wordle merchandise below. 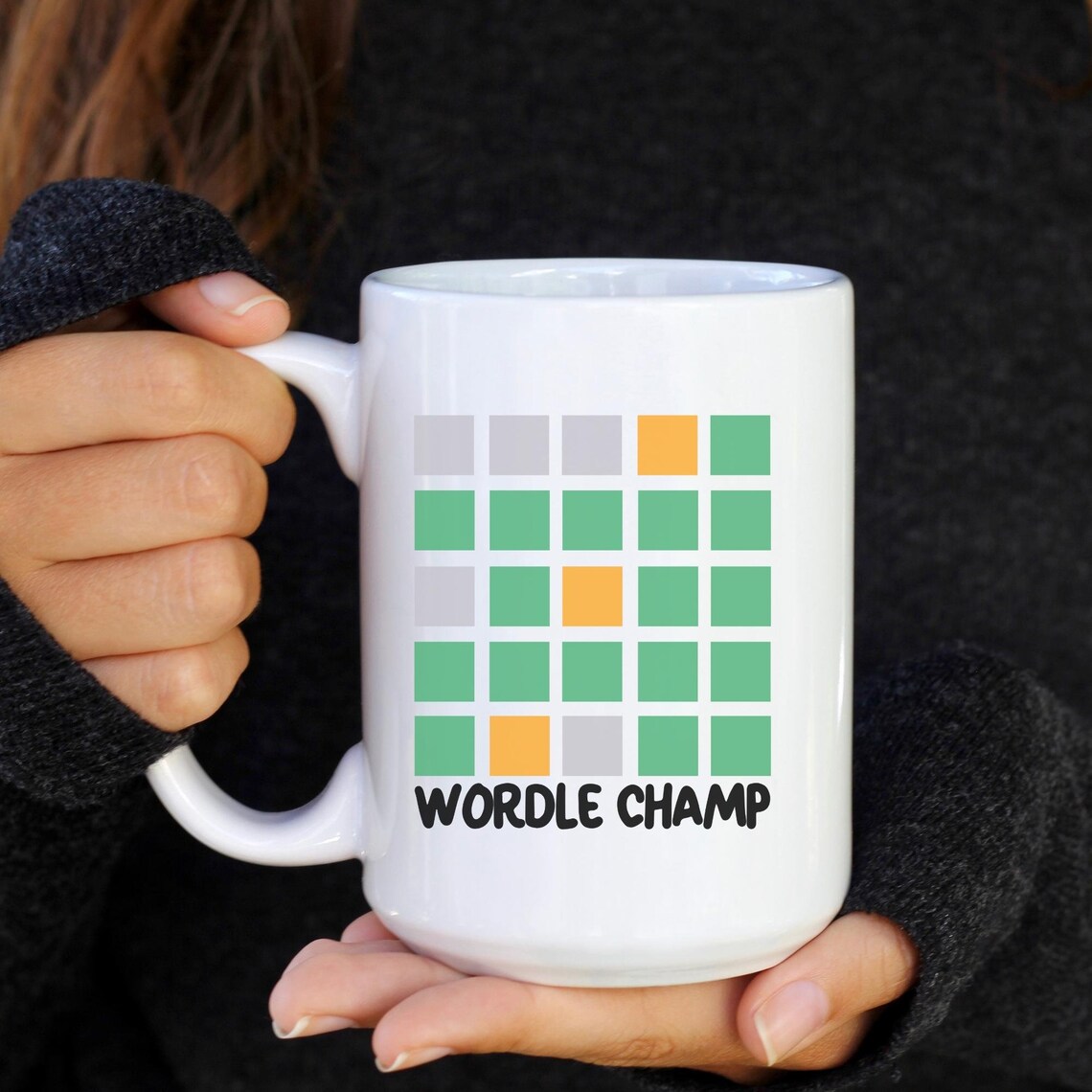 Hate to break it to you, mug, but you’re clearly not being held by a Wordle champ. The mug depicts solving a Wordle on the second guess, which is impressive. But then… the Wordle continues? It just keeps somehow going? You get three letters on your third guess, you solve the Wordle again on your fourth guess, and then blow it on the fifth guess despite already getting it right twice. And there’s no sixth guess! This is the worst Wordle I’ve ever seen.

Maybe stick to this mug, which at least knows the rules of Wordle and what happens when you win on the final guess, and is nice enough to not actually print the word “Wordle” on it.

Word of the Day shirt and mug 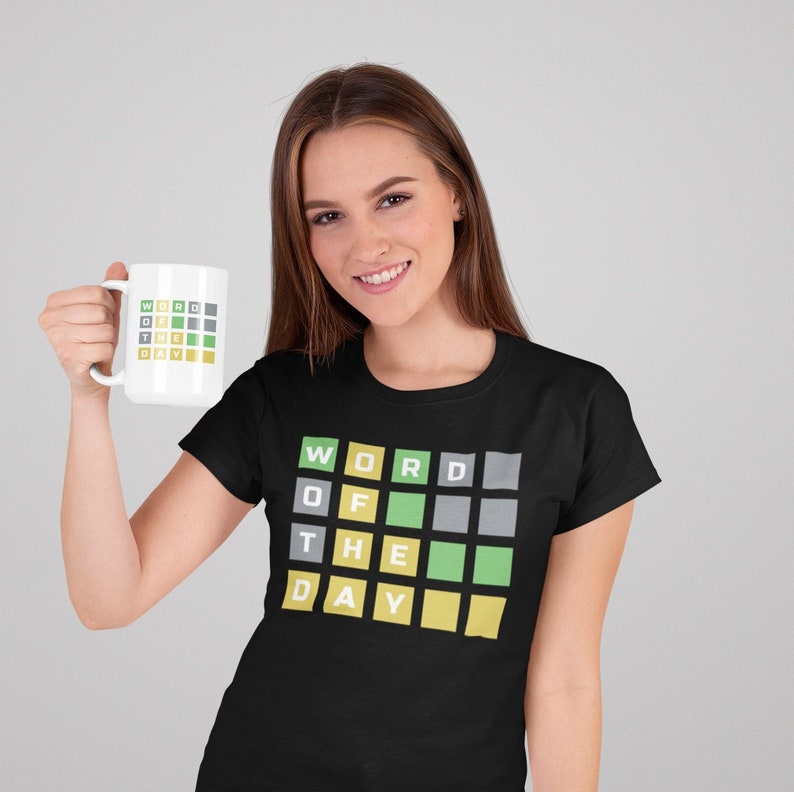 I’m two entries in and I’m already getting irritated. Yes, this shirt and mug are correct, there is a word of the day in Wordle. That’s the goal of Wordle! But you can’t just… I mean you can’t stick two, three, and four letter words into a Wordle grid. Wordle is five letters. And this doesn’t even… the O in WORD is yellow indicating it’s in the word but in the next row it’s gray indicating it’s not. This just doesn’t work. At all. I’m fuming. 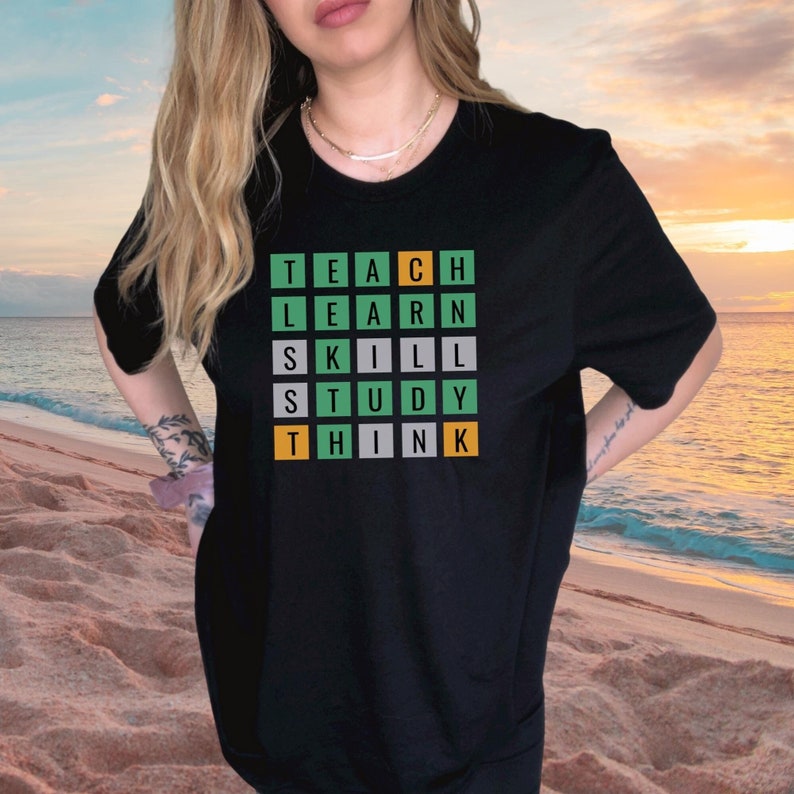 OK, I’m calming down. At least these are all nice, positive words—teach, learn, skill, study, think—and they’re all five letters. That’s a great start. But, yeah, this shirt also doesn’t know how Wordle works. You can’t go from TEACH (4 letters correct) to LEARN (5 letters correct), and then to SKILL (one letter correct, and also LEARN should have won because all five letters are green), and then… OK, I’m fuming again. I hate this shirt and no teacher should wear it.

See, here’s the correct way to do a Teacher Wordle shirt. Was that so hard? 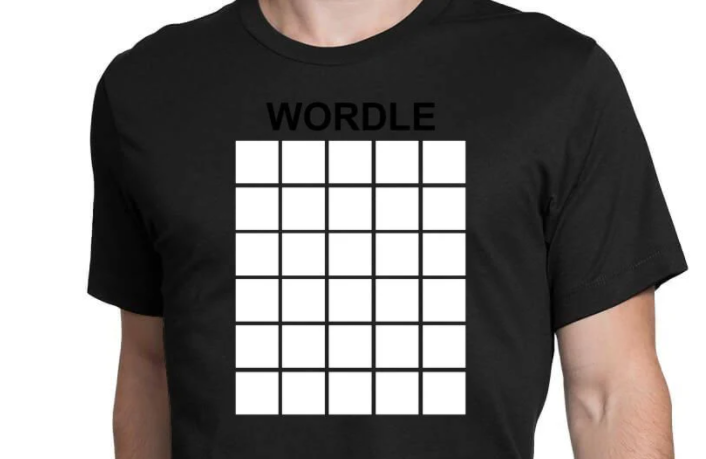 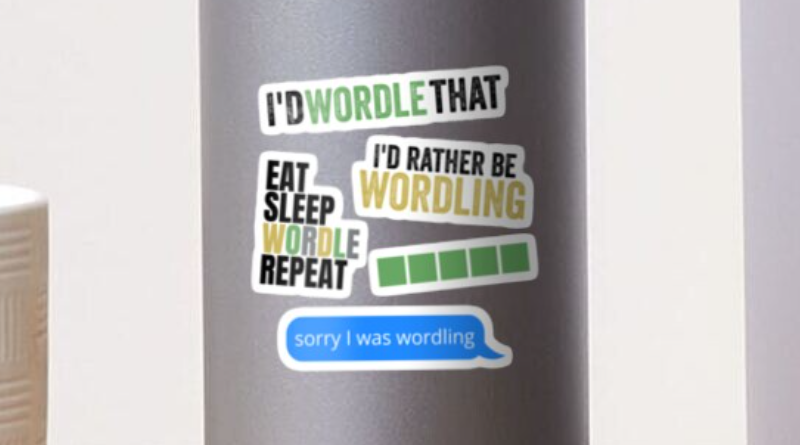 This is a pack of stickers, so let’s dig in. “I’d Wordle that”—I assume you’re expressing the desire to have sex with someone, but you’re using Wordle, which means you want to stare at someone for eight minutes, occasionally touch them, and then say “Knoll? Really?”

We also have “I’d rather be Wordling” and “sorry I was wordling.” I don’t think we, as a society, have really verbified Wordle yet the way we did Google, so let’s not. “Eat, sleep, Wordle, repeat”—I know this is a common entry for games, like “Eat, sleep, Minecraft, repeat” to show how hardcore you are, but Wordle is something you do for maybe five or 10 minutes? You don’t grind out 100 Wordle puzzles in a day. Doesn’t work for me.

I have no major objection to the sticker that is just 5 green squares. I guess I’d stick that on something. 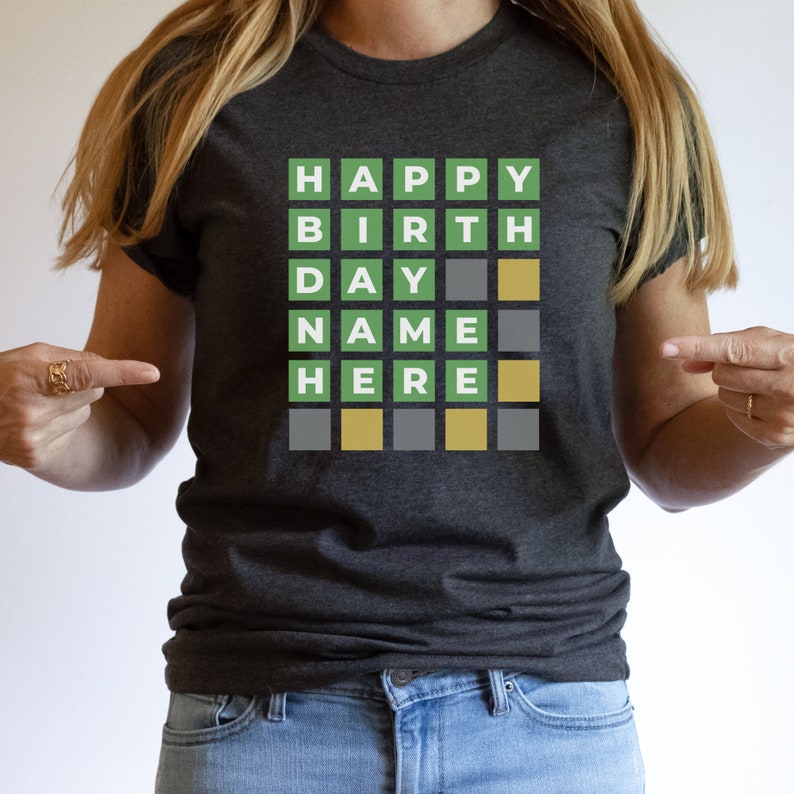 This is a custom Wordle shirt where you can dictate the text, so it’s just a bunch of blanks for you to fill in. Fine, though I’m confused by the idea of a Happy Birthday shirt. One, it doesn’t fit the puzzle, obviously, but am I buying this for someone for their birthday? Or am I buying it for myself to wear on someone else’s birthday? And what kind of gift is that? “Hey, I bought myself a shirt to wear once a year on your birthday. Happy birthday.” 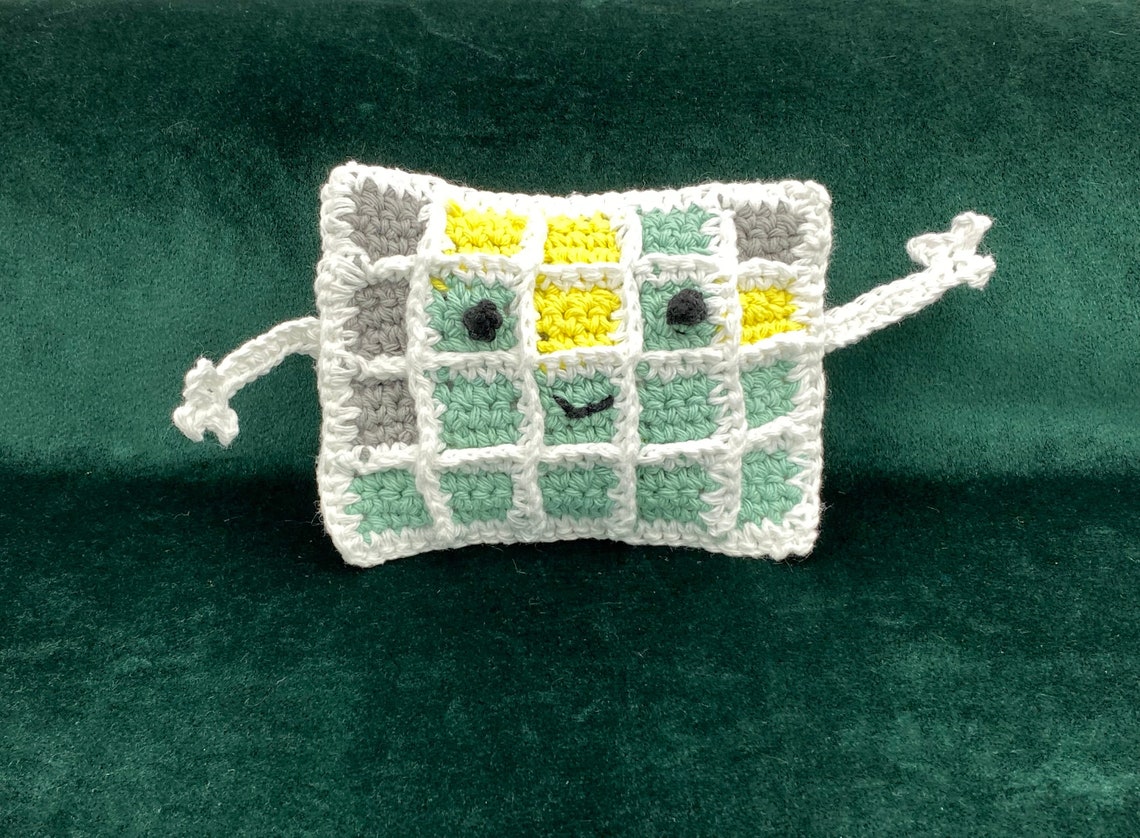 I’m not made of stone. A little plushie pillow with wee little arms and dots for eyes and little smiling mouth? This is a cute pillow. However, if the eyes are correct in guess two, they should be present in guess three and four. There should be six eyes and two mouths on that thing, which would then make it an abomination that should be cleansed with fire. Sorry, plushie. 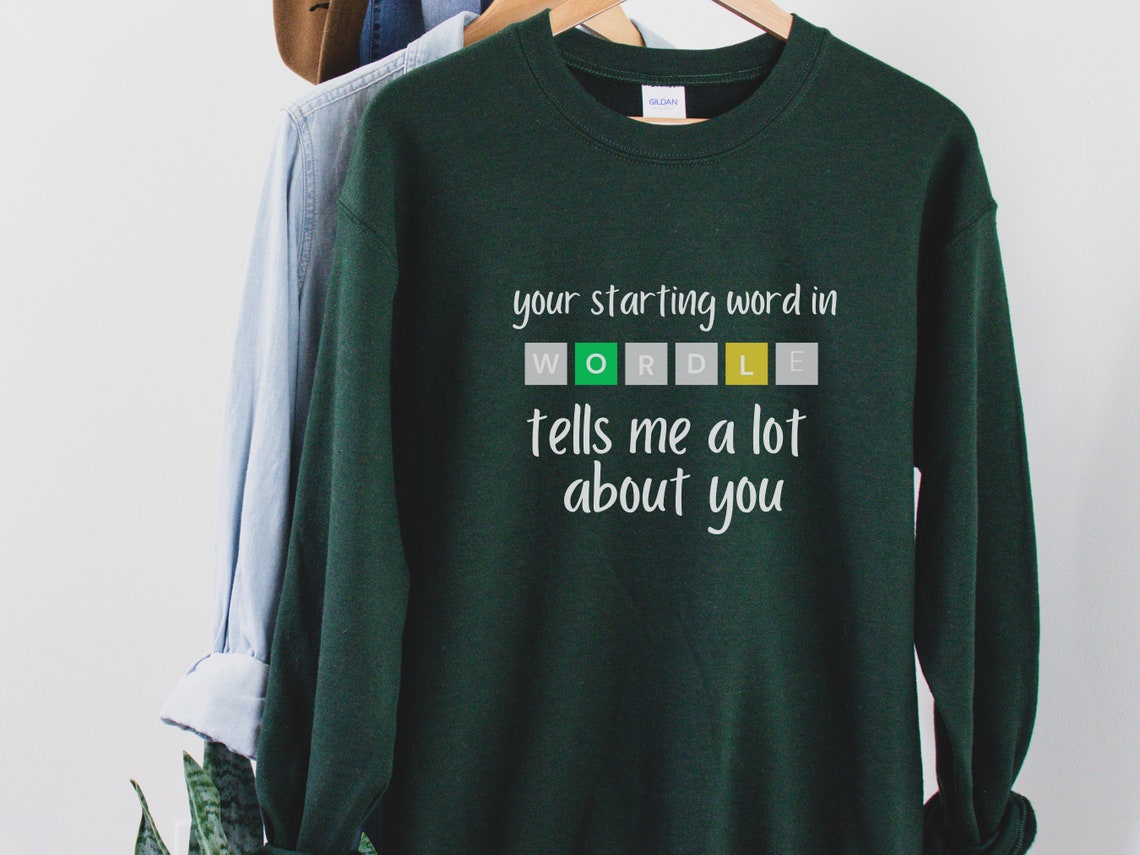 Your sweatshirt tells me a lot about you—you don’t know how Wordle works because Wordle words have five letters, not six, so Wordle itself won’t fit into a row.

IDK What Wordle Is shirt 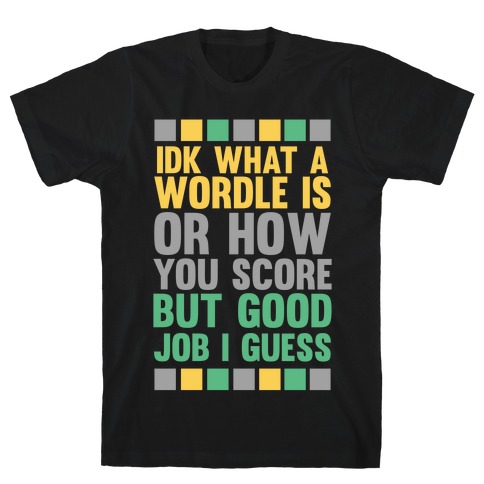 Refreshing to see a Wordle shirt admit it doesn’t know what Wordle is, so I can’t fault it for a seven-letter row instead of five. It doesn’t know!