ESL Impact, the first all-female league under ESL Gaming’s #GGFORALL initiative in December is all set to take place from 17th March. ESL Impact will feature a total prize pool of $150,000 USD (INR 1,12,02,660). Two such leagues will be taking place as part of the planned 2022 female CS:GO circuit, with its finals being played on LAN as part of mainstream tournaments like DreamHack Dallas and DreamHack Winter. Apart from these events, one standalone feature tournament will also take place, along with a total of 24 scheduled online cash cups throughout the calendar year.

The first of the two ESL Impact leagues is all set to take place from March onwards with its LAN finals set to take place as part of DreamHack Dallas 2022 in June. This is the first women CS:GO event for the year which is part of the #GGFORALL initiative.

The first season of the ESL Impact league will be kicking off from 17th March onwards with the LAN finals scheduled to take place from 3rd to 5th June as part of the DreamHack Dallas 2022.

Starting 17th March, matches will be played and broadcast every week on Thursdays and Fridays for a period of six weeks. The livestream of the matches can be viewed on ESL’s official Twitch channel.

Dates for the open qualifiers are as follows,

Dates for the wildcard qualifiers are as follows, 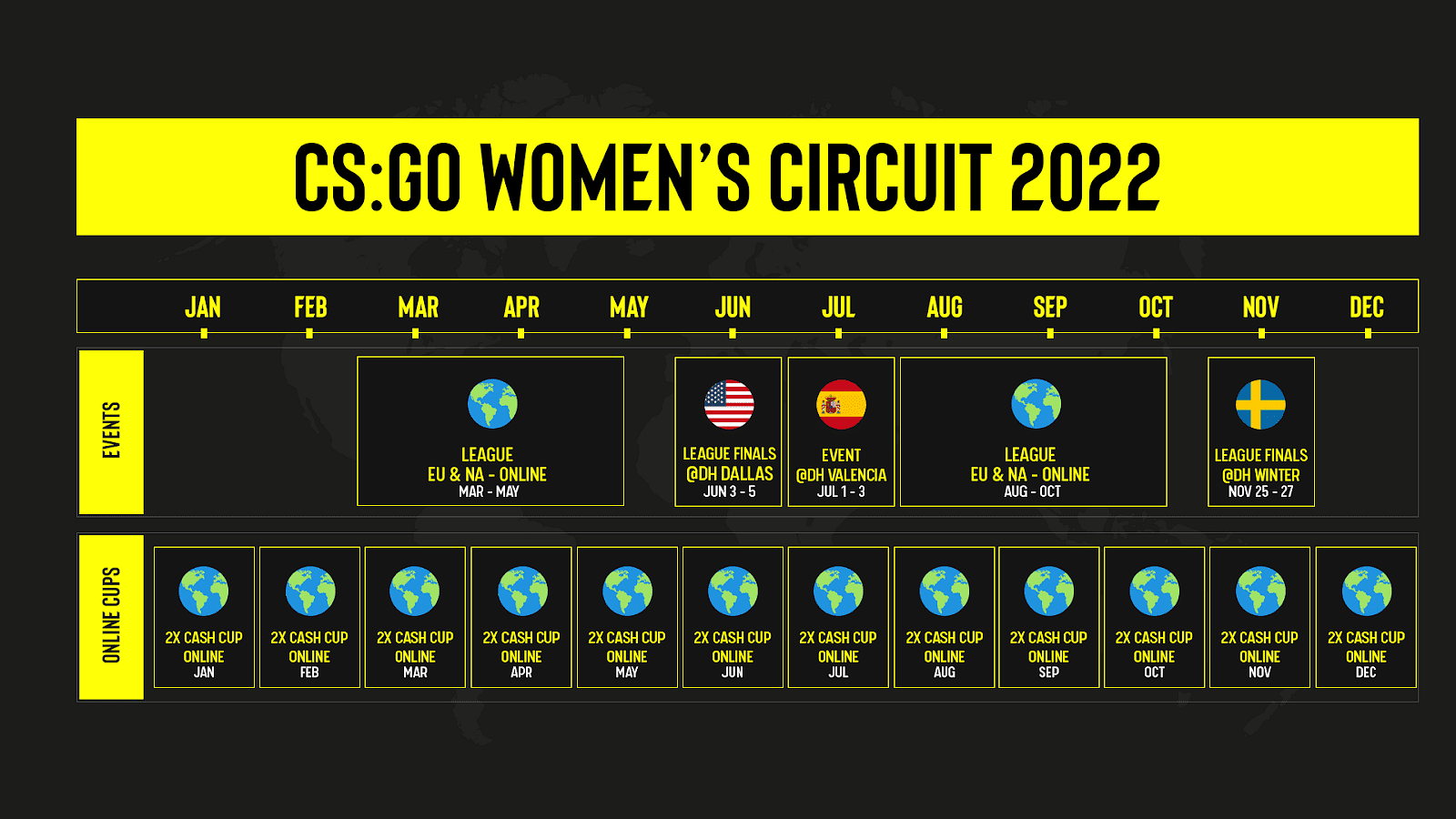 The league will witness participating from a total of 24 female CS:GO teams, eight teams each from Europe, North America, and South America. These eight teams will consist of two direct invites from ESL along with six teams being determined via the open qualifiers.

For each region these eight teams will be divided into two groups of four teams each. Both these groups will be following a round-robin format with each match featuring a best-of-three series.

Each team will be going up against the other twice, the top two teams from each group moving further into the league playoffs. Here, the winners of Group-A will go up against the runners-up of Group-B, and vice-versa, determining the two teams that will be qualifying for the LAN Finals at DreamHack Dallas.

Six out of the eight teams qualifying for the LAN Finals will be qualifying through the league stage, two teams each from North America, South America, and Europe.

However, the remaining two slots will be given to teams from South Africa and Oceania, as one team each from the two regions gets an opportunity to compete at the big stage by making their way through the two wildcard qualifiers.

In the first season, no female teams from Asia will be competing in this league, but for season two one of the wildcard slots will be directed to Asia instead of Oceania.

ESL Gaming is committed to the #GGFORALL initiative which follows the belief “it’s not GG (Good Game), until it’s GG for all”. So the tournament organizers went a step further, instituting a women players council while also increasing their representation as broadcasting talents by introducing a talent development program.

Following the culmination of ESL Impact leagues first season, the organizers will review the format with the women players council, making all the necessary adjustments based on the discussions and feedback.

ESL Earned Nearly $2 Million From CS:GO Tournament Broadcasts on Twitch According to Leaks