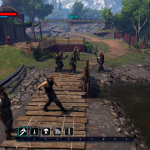 It’s me again! February has been somewhat a drizzly and windy month here in the U.K, so I’ve been spending a lot of time inside with books and my games. It’s already been a big couple of weeks with some large AAA launches, with more to come. 2022 is shaping up to be a big year for the gaming industry.

I’ve been playing quite a few games. Some of them I’ll cover today: both recent and older releases, and I thought I’d jot off some thoughts on them. It also gives me a great excuse to give some preliminary opinions on them, even if they aren’t full reviews yet. Give it time!

ELEX 2 is just around the corner, due for a March 1st release, so I decided recently to return to the original game by Piranha Bytes to get back into their odd game choices. 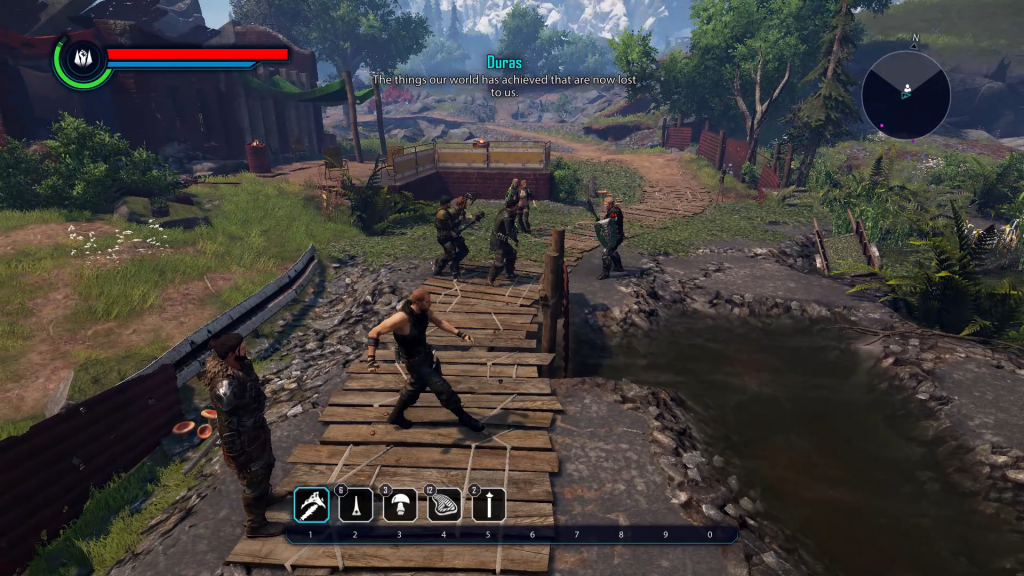 Time to run away from these guys….quick.

Piranha Bytes have a massive cult following in Europe, making what’s the epitome of ‘Eurojank’ games. These are usually very ambitious games with a lot of love and thought, but are brought down by clunky mechanics and bugs. PB are no exception to this; all their games bring similar experiences. They are masters of environment and world design, if they are a bit unpolished and obtuse. For their small team size however, I’m always willing to put up with some jank for an imaginative and creative experience. ELEX is no exception to this rule, and the opening to this 2017 scifi-fantasy RPG is brutal. Everything in the early game kills you, and the opening 10-15 hours feel like a hardcore survival game as you run desperately from location to location, trying to survive attacks from fearsome enemies like rats.

Yep, even mutant rats can kill you easily. ELEX has a clunky combat and stamina system that really drags it down, and the opening to the game is obtuse to the point of fury. I know a lot of people who got burned out playing early on. After 20 hours of my replay, I can’t say I disagree. With the combat, difficult early game, odd bugs and rough movement, ELEX is a challenging game to try.

Despite these issues, I’ve always found this game to be fascinating. Most of its quests can be completed in multiple ways, and its open world has plenty to explore and discover. It’s a weird mix of medieval fantasy with the Berserkers, a desert western biome with the Outlaws and the hi-tech areas with the Clerics. There’s so much diversity to the world design that it’s a joy to experience (even if you’re doing it scared you’re gonna die), and the jetpack makes for a vastly improved experience. 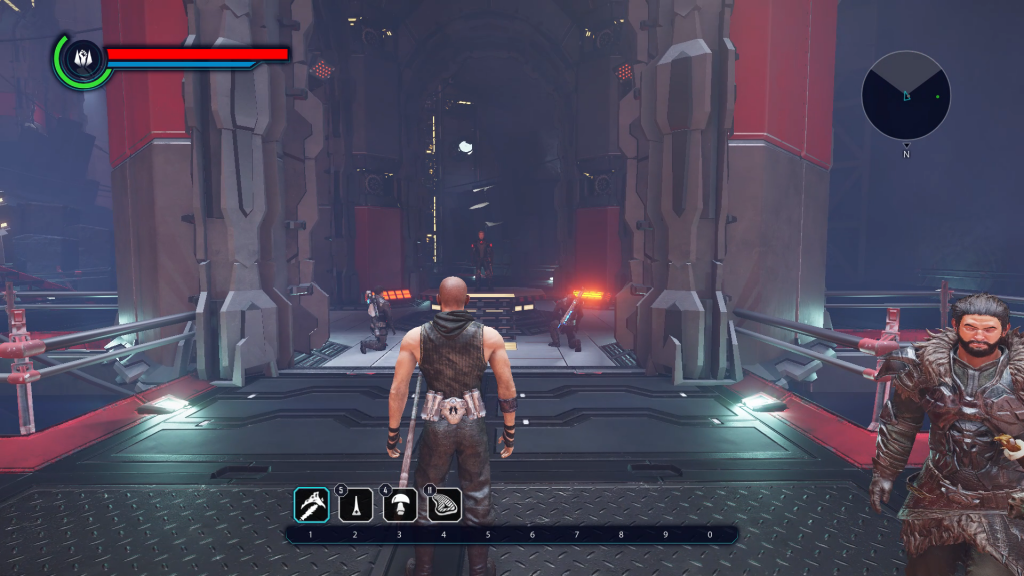 ELEX stumbles in a few areas, but does world design very well!

In my E3 Hype article, I covered ELEX 2. I really hope the game improves on this. For how much I enjoy Piranha Bytes, they do feel like they’re stuck in their ways. Most of their games follow the same design, with difficult beginnings and combat issues. It’s almost as if they’ve been afraid to branch out and experiment for fear of turning off their cult following. Hopefully the sequel is both an improvement and something the developers take seriously. Some of their games have been failures, like Gothic 3 and the later Risen games, but I still have plenty of hope for the sequel.

We’ll find out in two weeks!

Well, I was expecting this game to be a disaster. Techland has worked on the hyped sequel to the original Dying Light for years, and it had a very rough development cycle. So rough, in fact, that I was concerned it would never come out in the first place. Bit like Bloodlines 2. 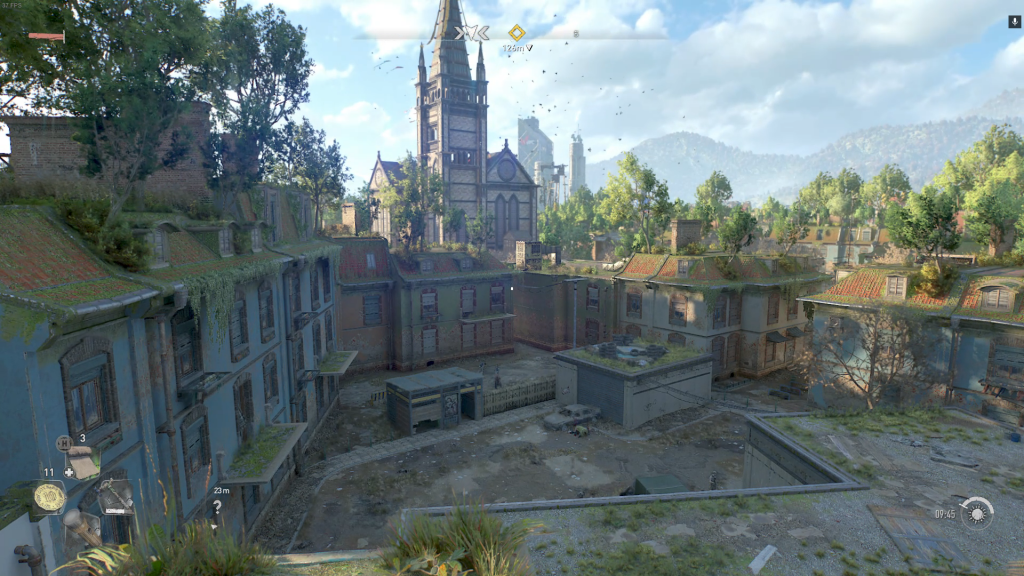 This is gonna take a while…

Sigh. Poor Bloodlines. I have no hope in that game coming out.

Fortunately, Techland mostly made it, with Dying Light 2 coming out on PC and consoles at the beginning of the month. Some lovely friends joined forces and gifted me this game for my birthday (thanks guys!) and I’ve been slowly getting into it. There was a lot of fear when Dying Light 2 declared ‘500 hours’ of content, wasn’t there? It really goes to show how much the scene has changed. Five or six years ago, that much content would have been declared an amazing thing. Open world fatigue and the oversaturated Ubisoft game design really has made people exhausted with long games. I admit I went into Dying Light 2 with some concerns.

You know what? It’s not bad!

I’ll be the first to say it’s not perfect. I had difficulty slogging through the opening couple of hours. The prologue is a railroaded, clunky mess which introduces you to the mechanics and the base story, and it took a while to get to the open world section. With no free saving option and relying on autosaves, I found that irritating to stomach and I just pushed through it out of irritation. However, once the open world opens up I ended up enjoying it a lot more. I’m only 12 hours in at this time of writing, but yeah, I’m liking it! It feels like the first Dying Light, true, but Dying Light did plenty of good with movement and parkour mechanics. The sequel builds on it, and movement/world design is a delight. I’ve had some bugs, but it’s nowhere near as broken as I expected it to be. 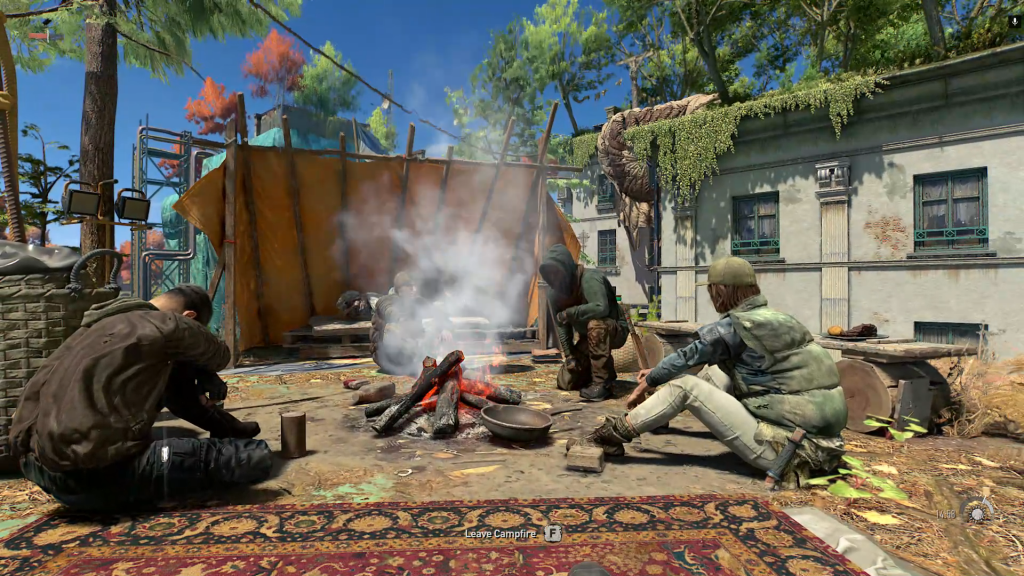 The story… yeah, kinda sucks. Yeah, that’s not new. A lot of AAA games struggle with story development, though it’s fair to say the zombie genre never does well with story design. Dying Light 2 is a parkour sandbox with story attached to it, but for a game which takes its story very seriously I’m not too impressed with the writing. It could have been more unique. Humanity is the true evil, factions backstab each other, blah blah. You know the drill. It’s not awful and it’s certainly enough to keep me playing as an excuse for the great gameplay, but for something which is so story focused, it could be much better. Every time I was playing Dying Light 2 I’ve been focusing on the open gameplay, not the story. I’m not enthralled by it as I was with Disco Elysium or Cyberpunk.

It’s early days, I’ve only put in a dozen or so hours, so this isn’t a full review. But I’m liking it, more than I thought I would going in.

Another game I think many people expected to be disappointing! I love being proven wrong about video games, and Pokemon Legends: Arceus was a radical change in the Pokemon franchise it desperately needed. 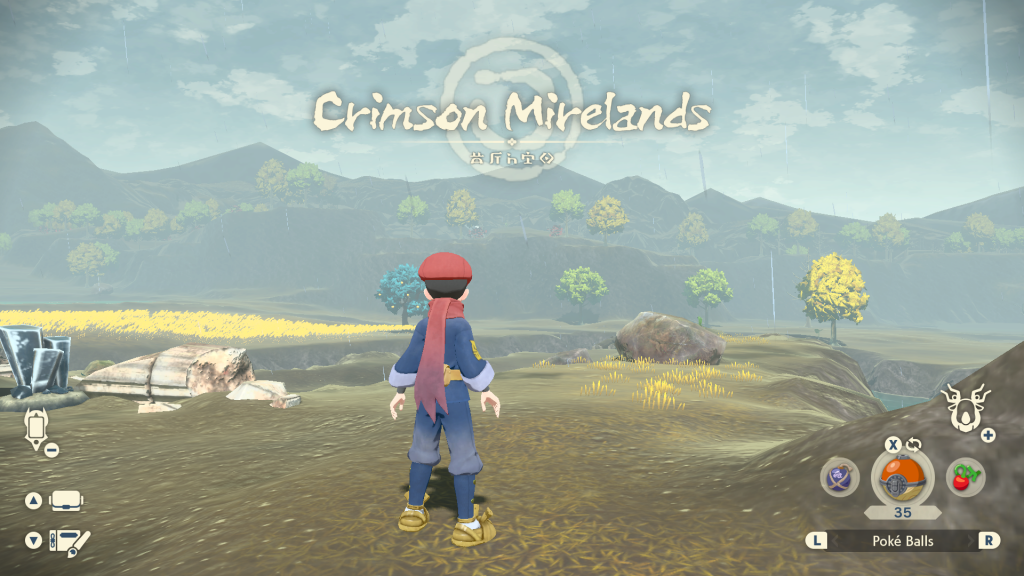 Might be light on visuals, but this game does wonders for exploration.

Oh boy, did it need it. Pokemon’s been stagnant for a long time. Despite its massive appeal worldwide, the games have struggled to evolve despite selling like hotcakes. Sword and Shield were controversial releases, and the Diamond and Pearl remakes last winter were unimaginative games that failed to meet approval. There was a lot of concern for the Legends title with issues in its visual quality. What would a game be like without many trainer battles, gyms and the like? How much fun is just catching and researching Pokemon going to be?

Quite a lot of fun, I must say! I’m not too far into Arceus, I only picked it up a week ago, but I’m rather enjoying this. Called into this archaic land by the god of all Pokemon, the game is a complete refresh on the series and for the most part, it succeeds. Navigating the open zones is both a delight and can be kinda frightening! Pokemon will even attack you directly if you let them, and when a giant Snorlax with red eyes comes after you, it’s a case of running away like crazy to avoid getting flattened. 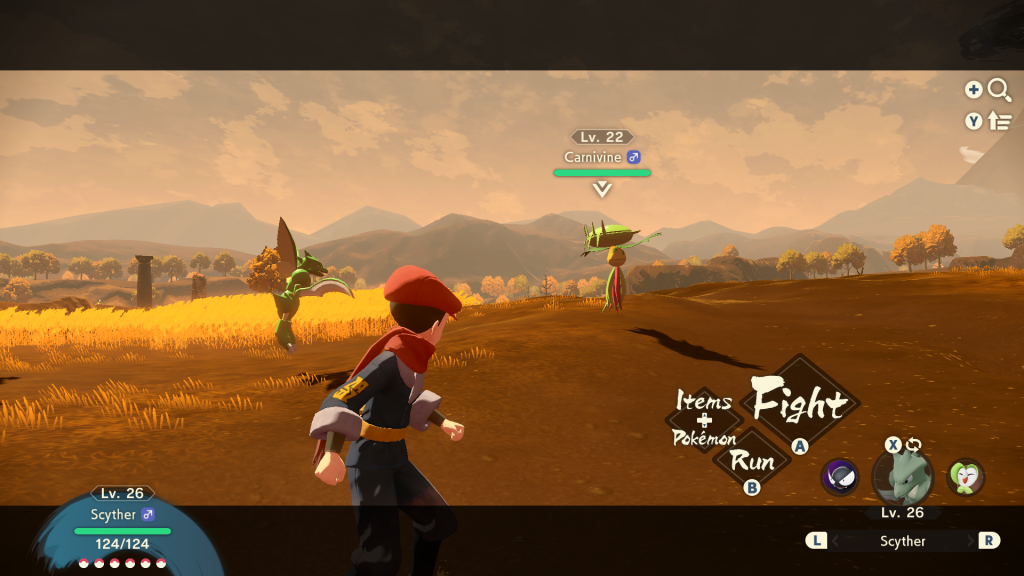 These big lettuces with teeth sure like trying to kill me!

Exploring the world and catching Pokemon is seamless and fantastic, and battling feels more fluid. They’re genuinely tough now, with wild Pokemon putting up quite the challenge and requiring strategy. True, there haven’t been many trainer battles in the game so far (I don’t think there are more than a few dozen tops) but that’s okay. In Legends, you’re a researcher in the beginnings of Pokemon; not a trainer. Those don’t really exist yet. It feels like a prequel and I’m finding it much better than I expected. The story, while nothing spectacular, is still solid and it keeps me engaged, and the Pokemon characters do rather well. It’s not quite on the level of Black and White, Sun or Moon or even the best parts of Sword of Shield for some characters, but I like them. 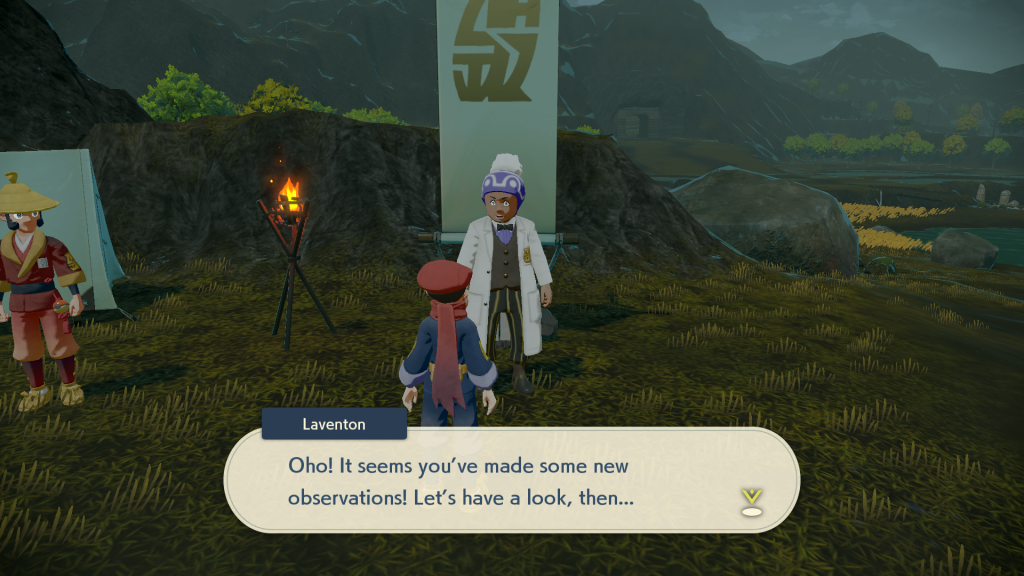 You’re gonna be doing a lot of this.

I do have a couple of minor gripes. First, I have to mention the graphics. Yeah, they could be better, and I’ve seen the Switch handle much better than what Legends puts out. Second, I haven’t liked the idea of being unable to swim at all. You tread water for barely two-three seconds before sinking to the depths. You’ll unlock ride Pokemon to transverse the world better anyway, so this is only an early-game problem for now.

So far though, Legends continues to impress me. I’m not sure yet how it ranks up in the history of the Pokemon game franchise, but it’s probably the best Pokemon game on the Switch.