How to conquer the Realms of Chaos in Total War: Warhammer 3

Having trouble with Total War: Warhammer 3’s Realms of Chaos? In the second game’s Eye of the Vortex campaign, we had to deal with an endless tide of Chaos armies razing and sacking our settlements, but this time we’re taking the fight to where they live, and it turns out, it ain’t pretty.

Well it is pretty, but in more of a hellish, mind-bending, cosmic horror sort of way. The Realms of Chaos are the four hurdles you have to overcome if you want to snatch campaign victory, but the Chaos gods, ever fond of messing with mortals, have prepared trials to complete before you can face their chosen daemon champion.

In this Warhammer 3 Chaos realms guide, I’ll explain how to access them, overcome their challenges, what units are best to bring for the daemon prince battle, and how to deal with your legendary lord’s understandable insanity when they return.

Total War: Warhammer 3 Realms of Chaos: How to unlock them

Once you reach a certain point in the campaign, around turn 35-ish, Chaos Rifts open across the map, giving you access to each of the four realms you must enter to claim the soul of a daemon prince. Despite being specific colours, each Chaos Rift can transport you to any of the four realms, but only your faction leader’s army can enter. The colour of the rift merely represents what type of demonic army or agent is likely to spew forth onto the map.

You can also use these rifts to traverse between each other for a small cost. It’s best to close them with agents and armies as soon as you can, though, as they corrupt the province they are in, and might spawn a demonic army. After the 15-turn timer at the top of screen concludes, the rifts will close, and you’ll have to wait for your next chance. You’ll also be kicked from the realm if another faction claims the daemon prince soul before you. 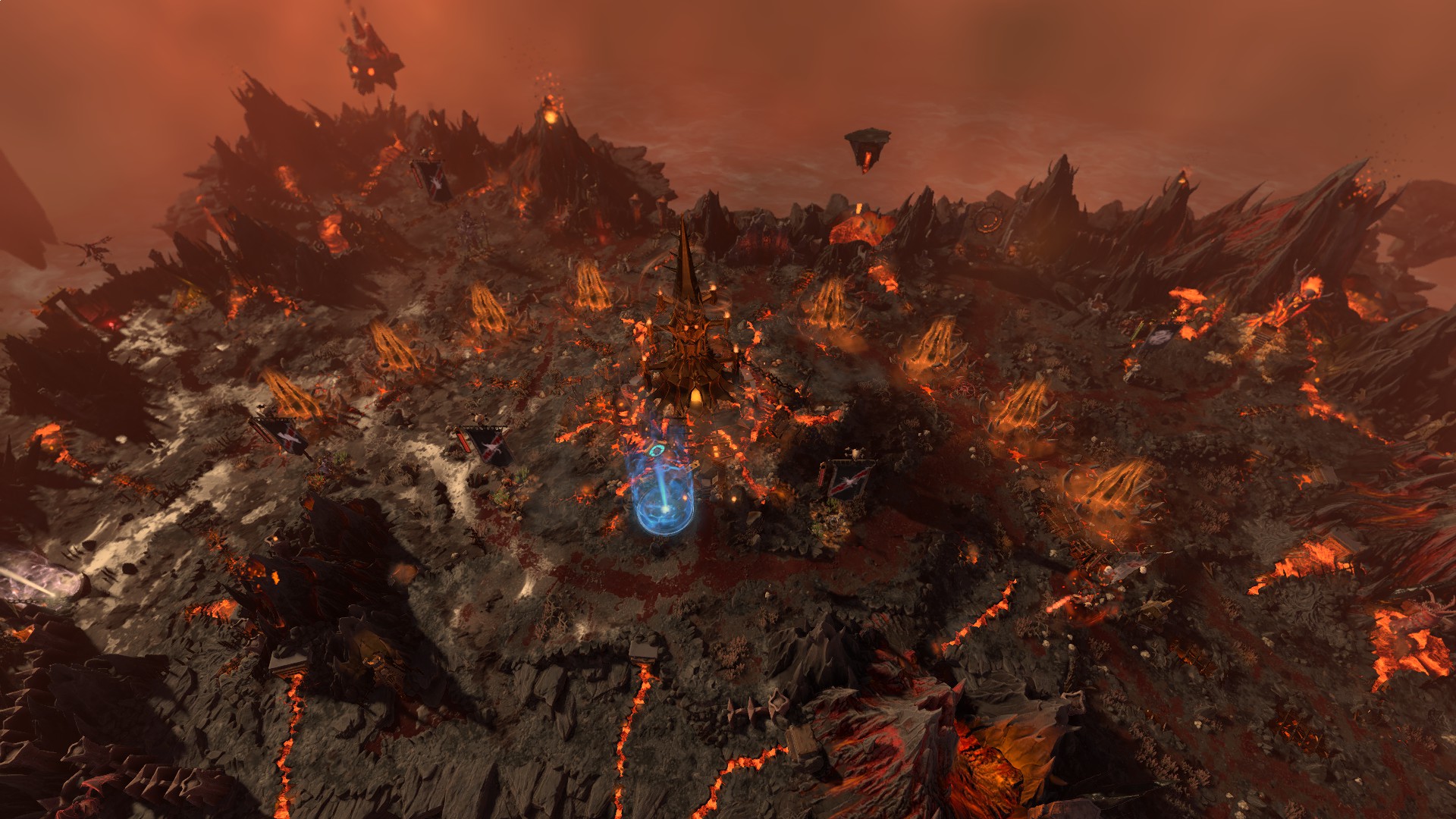 Khorne’s realm is one of simplest, since he’s a god who only wants two things: blood and skulls. This realm is a crucible where you have to fight and defeat rogue armies to accumulate Bloodshed. The first faction to fill its meter gets a chance to face the demon prince in the Brass Citadel at the centre of the map. In each corner, you can also claim a powerful demonic weapon that makes you unbreakable, though only one. After you complete the realm, you can take this weapon with you into the outside world, but Khorne will revoke it when you enter another Chaos realm.

The best tip for this one is go after your competitors first. You have to defeat around four armies to fill your meter, and considering multiple armies sometimes attack in the same turn, your opponent can win very quickly if left to their own devices. Once they are defeated, take your time dealing with the others, and use the encamp stance to replenish your troops, since unlike the other realms, encamping is the only consistent way to replenish your army in this domain.

When fighting against Khorne, you’ll want to bring a strong infantry line, since nothing blends infantry quite like all those Bloodletters. Armor-piercing ranged units are also great for cracking open the more heavily-clad Chaos Warriors, and will help you take down the Bloodthirster. If you run out of ammo during the daemon prince battle, you can always use the handy ‘replenishments’ option in the bottom right. Slaanesh’s realm is probably the trickiest to complete—not because it actually involves anything difficult, but because of how it’s laid out. You descend through the realm one ring at a time using gates, so if a competitor arrives before you, there’s very little chance you can beat them unless they fall foul of one of the Slaaneshi armies that patrol the rings.

For each gate you descend through, Slaanesh offers a random bribe to leave the realm, and the potential reward for the final gate is so good it’s essentially game-breaking. The Dark Prince’s Paramour ancillary provides +25 control in every province, meaning rebellions and Chaos uprisings basically stop happening for the rest of the game. Depending on the other rewards, this gate also offers either 45,000 or 90,000 gold. Needless to say, I recommend heading into Slannesh’s realm when the first rift opens just for the chance to grab this, as it lets you expand into new and corrupted territory without having to worry about rebellions. It also provides enough cash to build full garrisons, or upgrade your main settlement chains.

As long as you are the first faction to enter, you should be fine. I think it’s worth potentially doing this one last, though: If you have a sufficiently-powerful army, the Slaaneshi armies patrolling the rings won’t attack you at all, making it a real breeze. For any battles, Slaanesh’s units are fast-moving and hard-hitting, so focus fire down any big single entities or chariots before they break your frontline, and you’ll want some cavalry to protect your flanks. 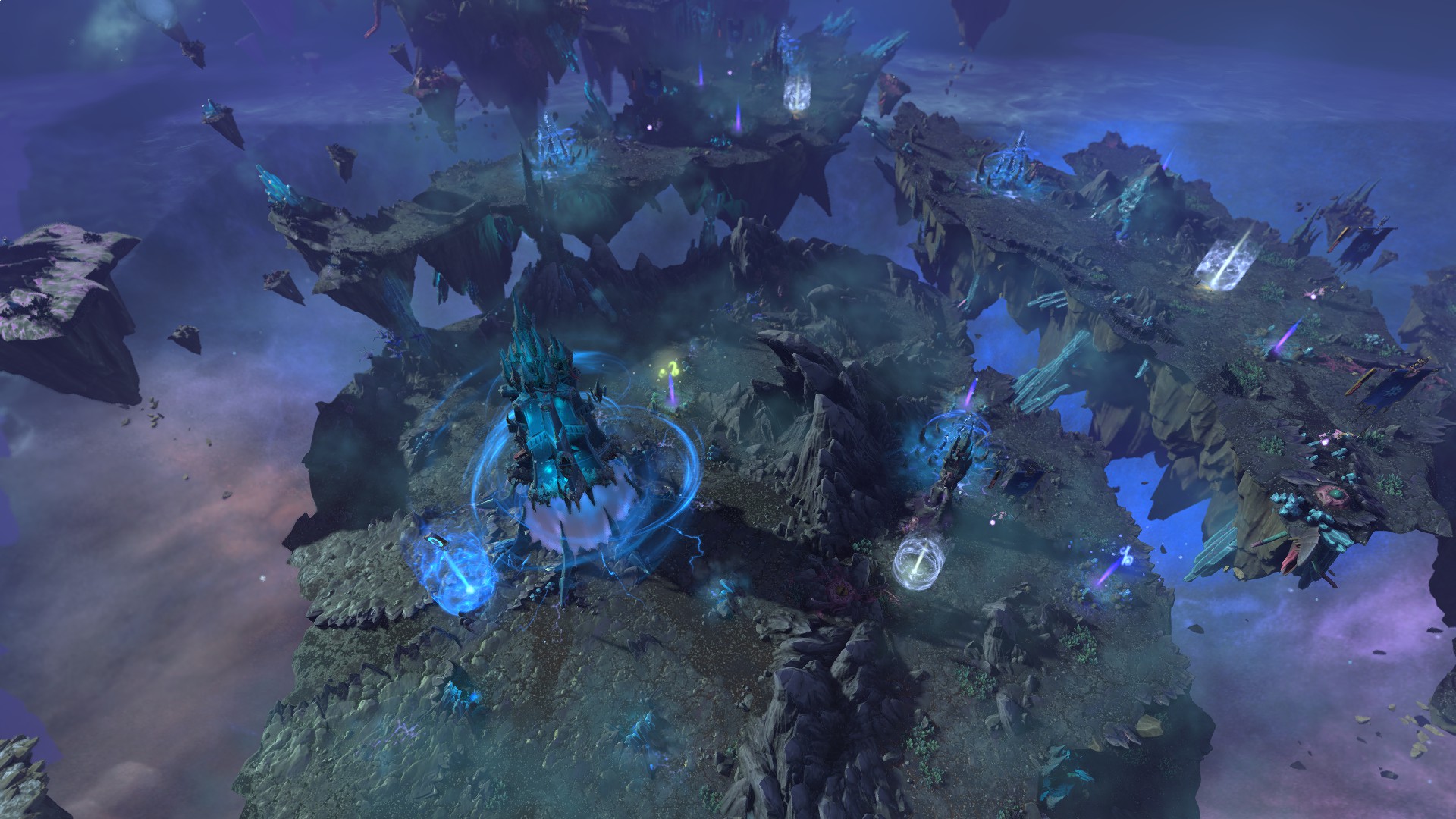 As you’d expect from the Lord of Change, Tzeentch’s realm is the most puzzling. You have to make your way to the Impossible Fortress at the centre of the map by teleporting between islands. The kicker? You don’t know which portals lead where. To find out, you have to beat armies and select the ‘reveal teleport sigil’ option when dealing with their captives or stroll into one of the white outlines that provide a boon of Tzeentch. This reveals sigils above two corresponding portals.

This realm is a process of elimination as you map out the portal network, so be sure to make a note of which portal leads where. If a competitor is also in the realm with you and moving through portals, note down where they end up, too. Even if you don’t uncover all the sigils yourself, you should still be able to match them. It’s kind of a pain, but it’s also best to fight every battle yourself to ensure minimal losses, then you can use the captives to reveal a sigil rather than to replenish your army.

When fighting Tzeentch, it’s best not to blob up your units and infantry, as spells and overwhelming ranged firepower can really punish you, and flying units like the Doom Knights cause absolute chaos among pack ranged units. It’s best to answer in kind and focus fire down any big threats, while using heavy cavalry to run down the ranged chaff such as Blue or Pink Horrors. 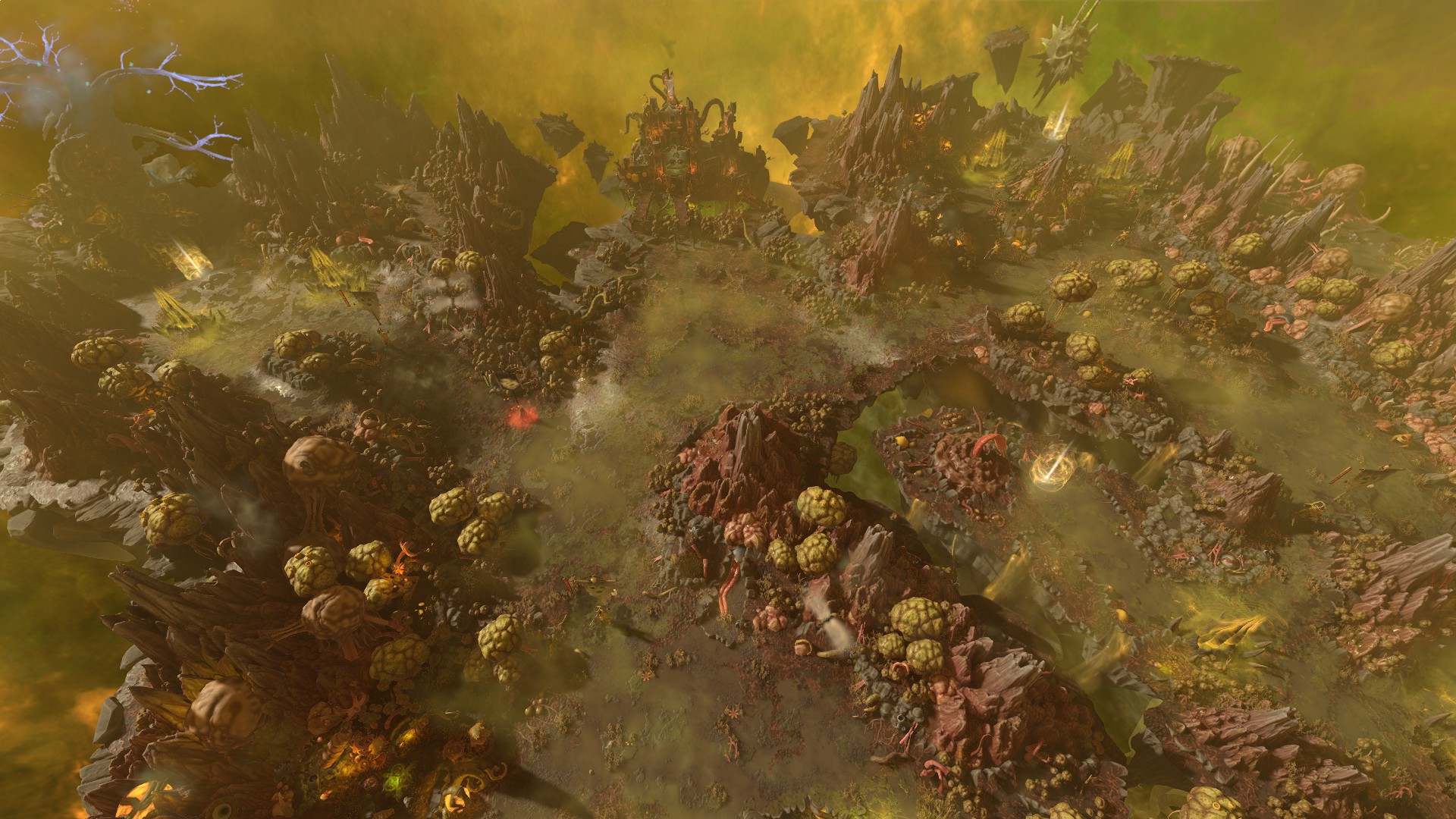 Nurgle’s realm is the simplest, requiring you to cross his plague-infested land to reach a point of interest and unlock the final battle. Along the way you have to cope with attrition, but you can enter the white outlines to replenish your army and gain a reduced rate to make things less gruelling. Armies of Nurgle block your path, too, so you’ll have to fight them.

Despite the attrition, this realm is pretty easy. If there’s a competitor, eliminate them when you can, and then take your time moving across the realm. You can use the encamp stance to replenish and prevent the plague, so if you’re willing to move at half speed, you don’t have to deal with attrition at all. If you’ve got any ancilleries that reduce attrition rate, such as the Silkweaver for Cathay, definitely equip them to your lord. I also recommend unlocking the bottom skill track, as that gives you the powerful reduced upkeep skills, and a reduced attrition rate, which is pretty much always useful with the corruption you have to face.

Most of Nurgle’s units are pretty slow and lack armour, but often have physical resist, large health pools and regeneration. Magical damage cuts through that physical resistance, and fire damage slows regen, so artillery is a good choice, provided you bring units to protect it from fast flying Plague Drones and Rot Flies. 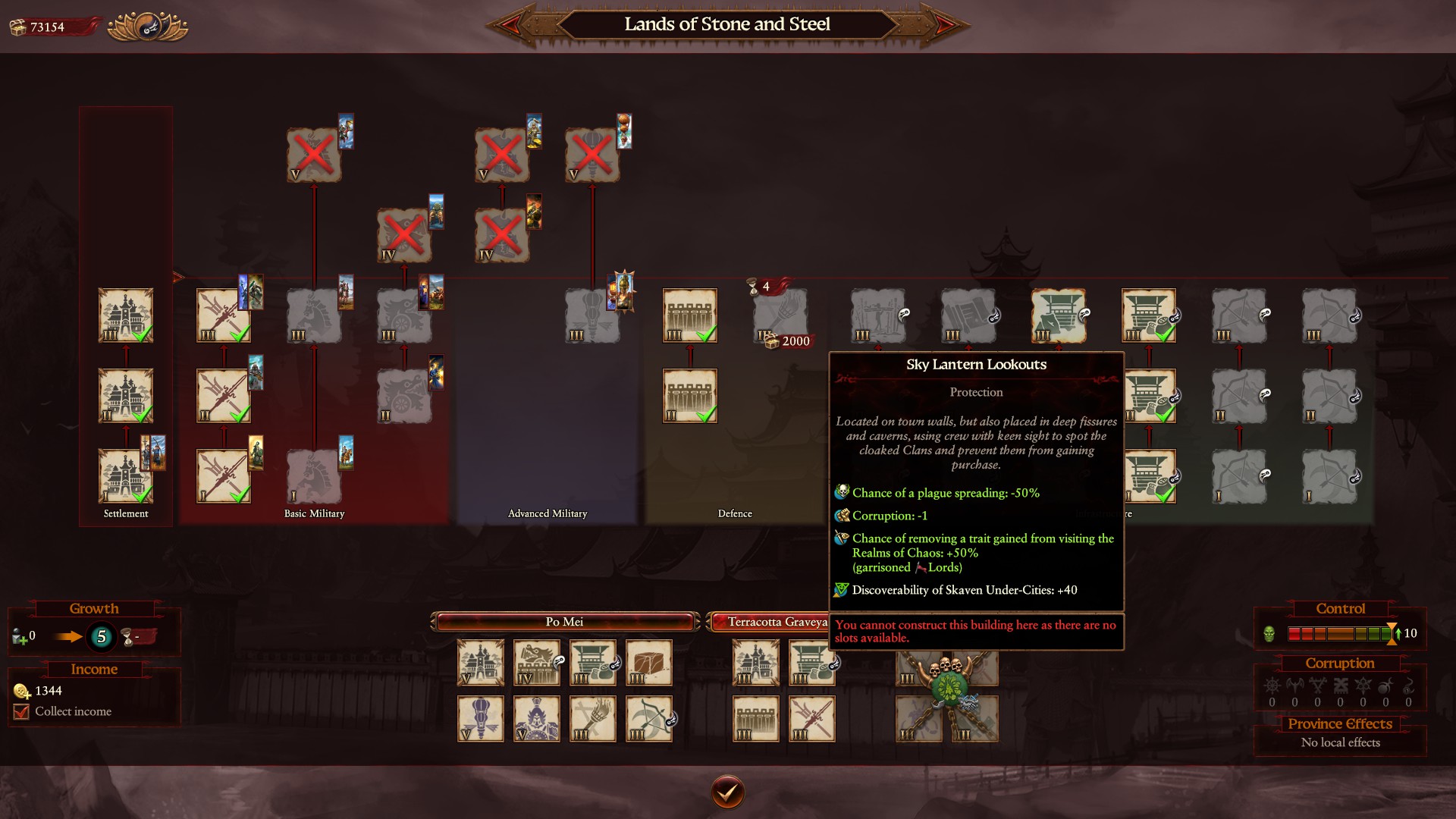 The longer you spend in a Chaos Realm, the more chance your legendary lord picks up negative traits. Some of these, particularly the ones from Khorne’s realm, cause powerful debuffs like a factionwide control decrease or a hefty reduction in leadership. To remove these traits, you can either garrison your lord in a province capital, or a settlement with a building from the ‘protection’ chain, like the anti-Skaven building. Better yet, do both.

It’s worth noting that some minor settlement province capitals such as Greasus’ main settlement, and many of the Ogre Kingdoms’ capitals, don’t provide this effect currently. You’ll need a major settlement if you want that inherent 50 percent chance to reduce negative traits when garrisoned.