Mask of the Rose is a murder mystery with a living victim, and a dating sim where you can stay single

Failbetter Games has been telling delightfully odd stories in Fallen London, its much-lauded browser game, for over a decade, inspiring brilliant spin-offs Sunless Sea and Sunless Skies in the process. But in its latest game, Mask of the Rose, we get to see where it all began. And, as a treat, we can get a date with a devil and solve a murder.

If you’re a stranger to Fallen London, here’s a quick primer: Victorian London has been dragged underground by bats, devils walk the streets, Hell is now its neighbour, death’s not as permanent as it once was and souls are a valuable commodity. It’s a weird, playful, gothic setting that’s sometimes compared to Lovecraft but is really more evocative of the works of Edgar Allan Poe, Terry Pratchett and China Mieville.

Mask of the Rose begins not long after Londoners find themselves underground, giving us our earliest glimpse of the city, and from a new first-person perspective. With all these changes happening, the city’s new, enigmatic masters decide a census must be taken, and you’re the dogsbody for the job. Between gathering up lots of information for your boss, you’ll also have opportunities to embark upon a romantic adventure, as well as clearing the name of your flatmate, Archie, the prime suspect in a murder—one where the victim sprung back to life. 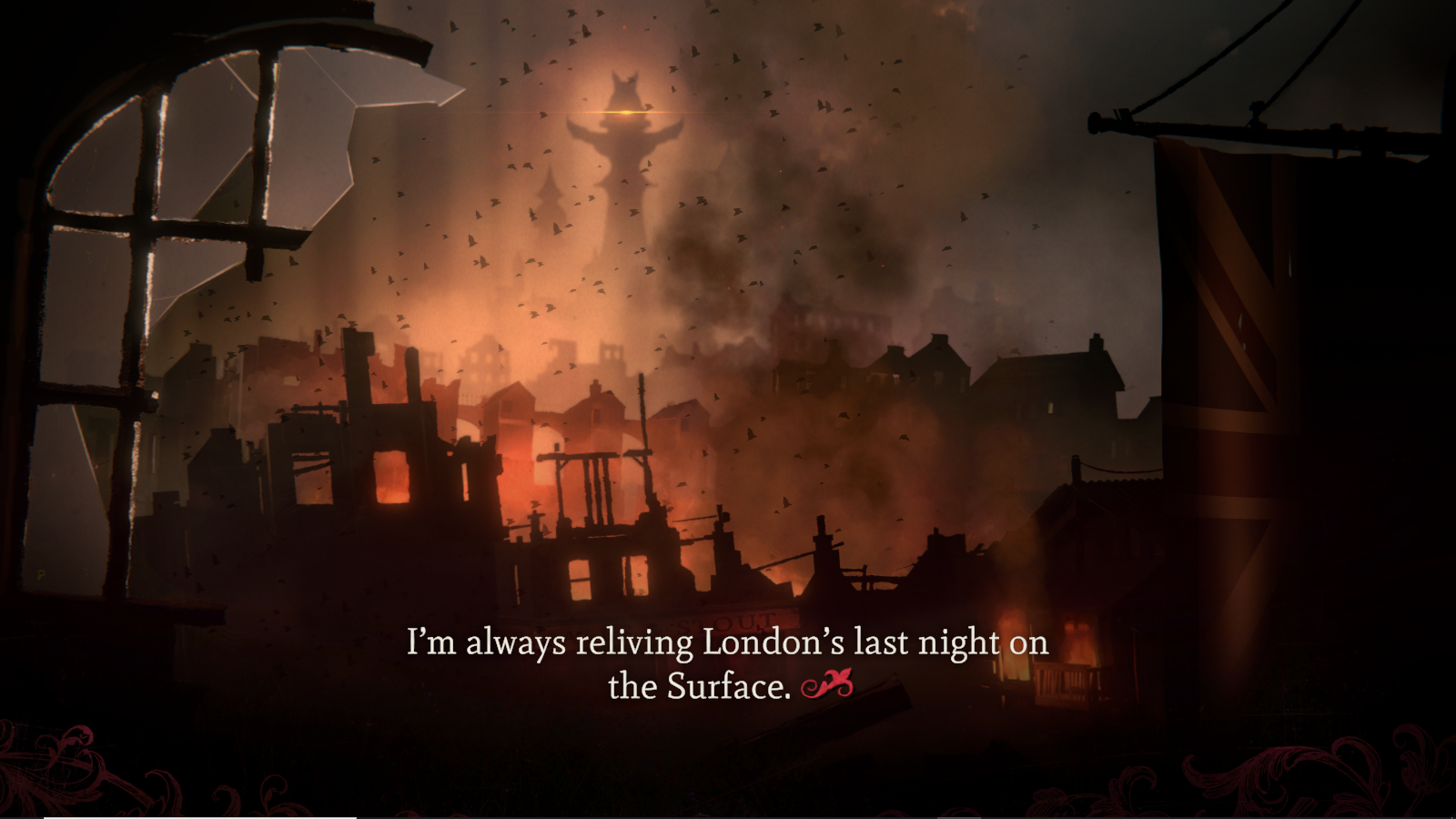 It’s a strange place but, for those new to Fallen London, it also might be a great place to start. “It creates an entry point for entirely new players who might be coming to this universe,” says creative director Emily Short, “because they’re coming into a space where the NPCs don’t already know everything either.”

For those who already know their way around the city, it’s a chance to see how the culture of Fallen London developed, and where all the rituals and festivals and eccentricities originated from. Despite this, Failbetter has been restrained when it comes to in-jokes and Easter eggs. Its goal has been to make sure these callbacks aren’t intrusive, and that they still contribute to the narrative and make sense through context, even if this is your first time in the universe.

Among the denizens of the newly subterranean city, the big changes are an opportunity to shed some of the traditions and prudishness of Victorian London. For your friend Griz, this means throwing off the shackles of the era’s gender norms, where the best she could hope for was getting married off and spending her life hosting parties—now she can have a career in politics and swap her corset for a dapper waistcoat. This is indicative of a game that’s interested in presenting a broad view of romance and relationships, free from the expectations of Victorian society. “Some of this ties into what our other games do as well, who our audience is, what we’ve kind of learned from working with the players who play Fallen London and the Sunless games,” Short notes. “But we wanted to build something where we were going to allow for a number of different ways of connecting with other characters.”

Some of these relationships may be explicitly sexual or romantic, gay or straight, but Failbetter also wanted to let people play matchmaker, setting up their friends while they remain asexual or aromantic. “We wanted to support that as well,” Short says, “because we’ve had a lot of experience at this point, hearing back from players about how they want to be able to inhabit the game worlds that we’re creating. So we wanted to make that space for them.”

Just as you can define your approach to romance, the cast of potential love interests also has some agency—they aren’t, as Short puts it, a “menu of characters, all of whom would love to get with you, potentially, if you do and say the right things”. They aren’t all open to every kind of relationship, so you might end up falling for someone who’s not actually interested in anything committed and long-term, like Milton, a devil whose longevity means he’s never going to be interested in marrying a mortal human. We’ve all been there. 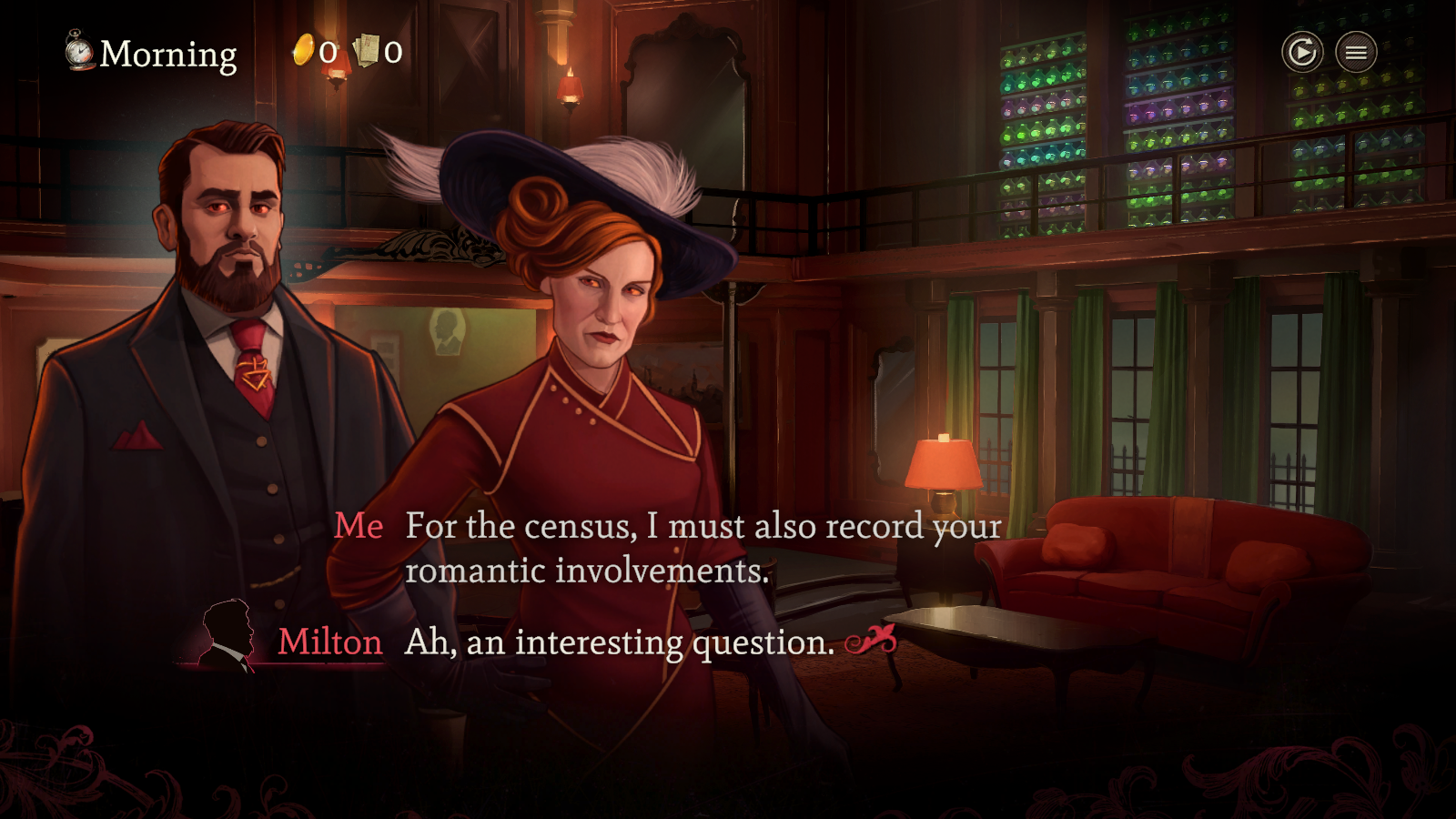 The matchmaking emphasises this. These characters aren’t just waiting around to fall in love with you, and they could be just as happy with someone else. This has also allowed Failbetter to explore and reveal different sides of these characters, and what might change depending on who they date.

After your interrogations reveal the murderer and you finish Mask of the Rose, you may still want to try again, as solving the mystery does not mean you’ve tied up every loose thread. How you use and interpret the information given to you, and who trusts you enough to share it, could open some doors and close others, so to get the full picture you’ll want to jump back in.

This does not, however, mean you’ll have to go through a bunch of unsatisfying conclusions before you get a good one. “It’s not designed to be the kind of thing where the first 10 times you play it, you have a frustrating outcome because you didn’t do it quite right, and maybe the eleventh time you finally get everything to work out,” Short says. “We don’t want it to be that kind of play experience. It’s not worth going for. But there certainly are things where you might not get a deeper explanation of something, depending on what your relationship with people is.” 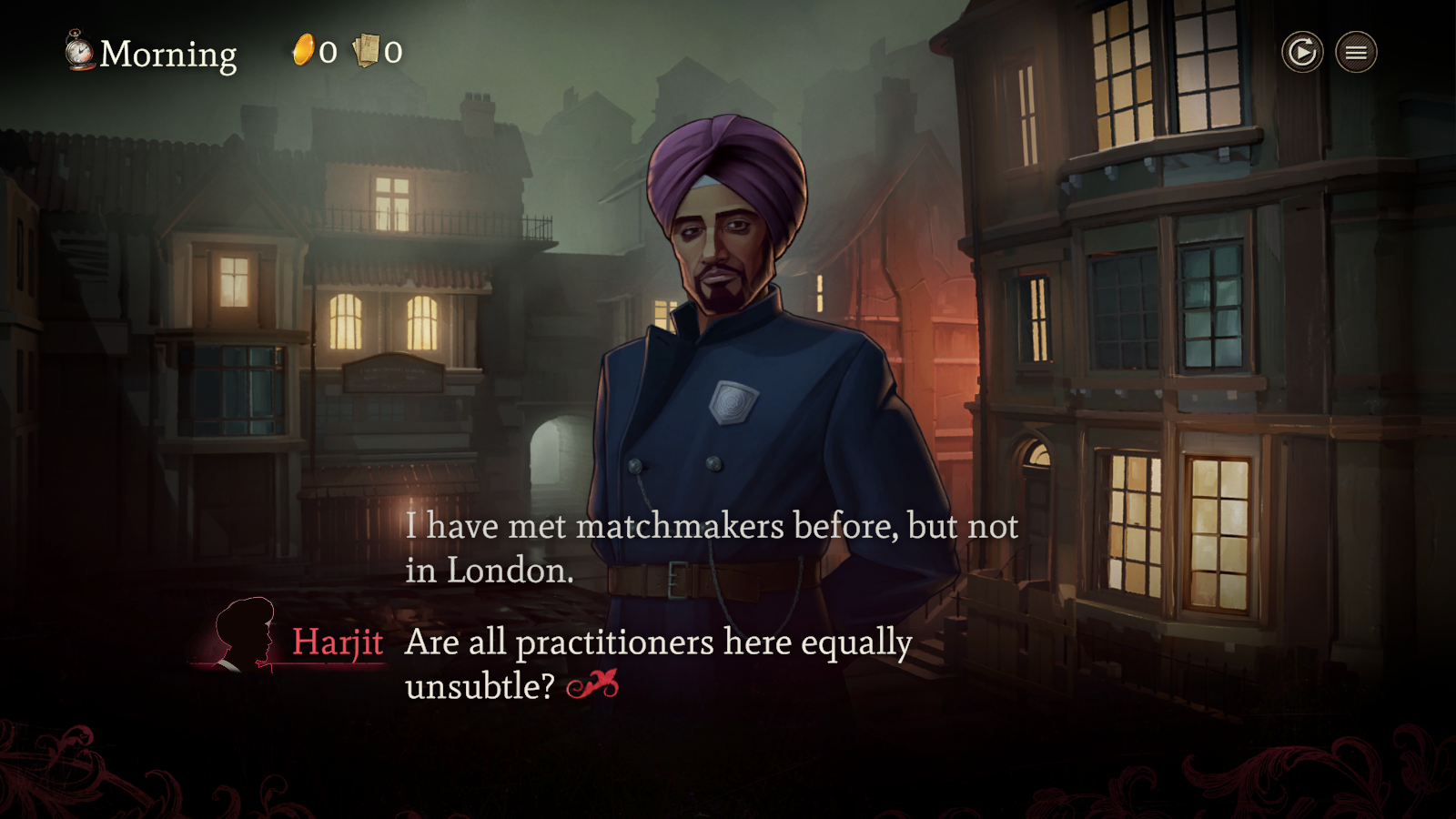 The census, the search for love and the murder mystery all come together when you start chatting. You pick who you want to talk to, spending your limited time, and from there you can push the conversation in different ways, but no matter what, you’re always trying to get to know the person better. As you do this, new opportunities will arise, be they side stories or more specific questions, maybe relating to the murder, or maybe flirty.

Story-crafting is where the mechanics of interaction become more novel. When you’re playing with story-crafting, you’ve got what looks like a murder board, with red string connecting text and images. As you connect these elements, dynamic text fills in the story, giving it more flavour and context. You can then share this story with other people. Maybe you’re presenting a theory about the murder, but you can also use it to create love stories, which your boss, Mister Pages, is particularly fascinated with.

This is not to say, however, that without the story-crafting element the conversations are straightforward. There’s a system dedicated to outfits, for instance, which can take chats in a different direction. Instead of having a hat that gives you more points in persuasion, like an RPG, your outfits are meant to be more expressive, telling the world who you are, and opening up new ways of interacting socially. 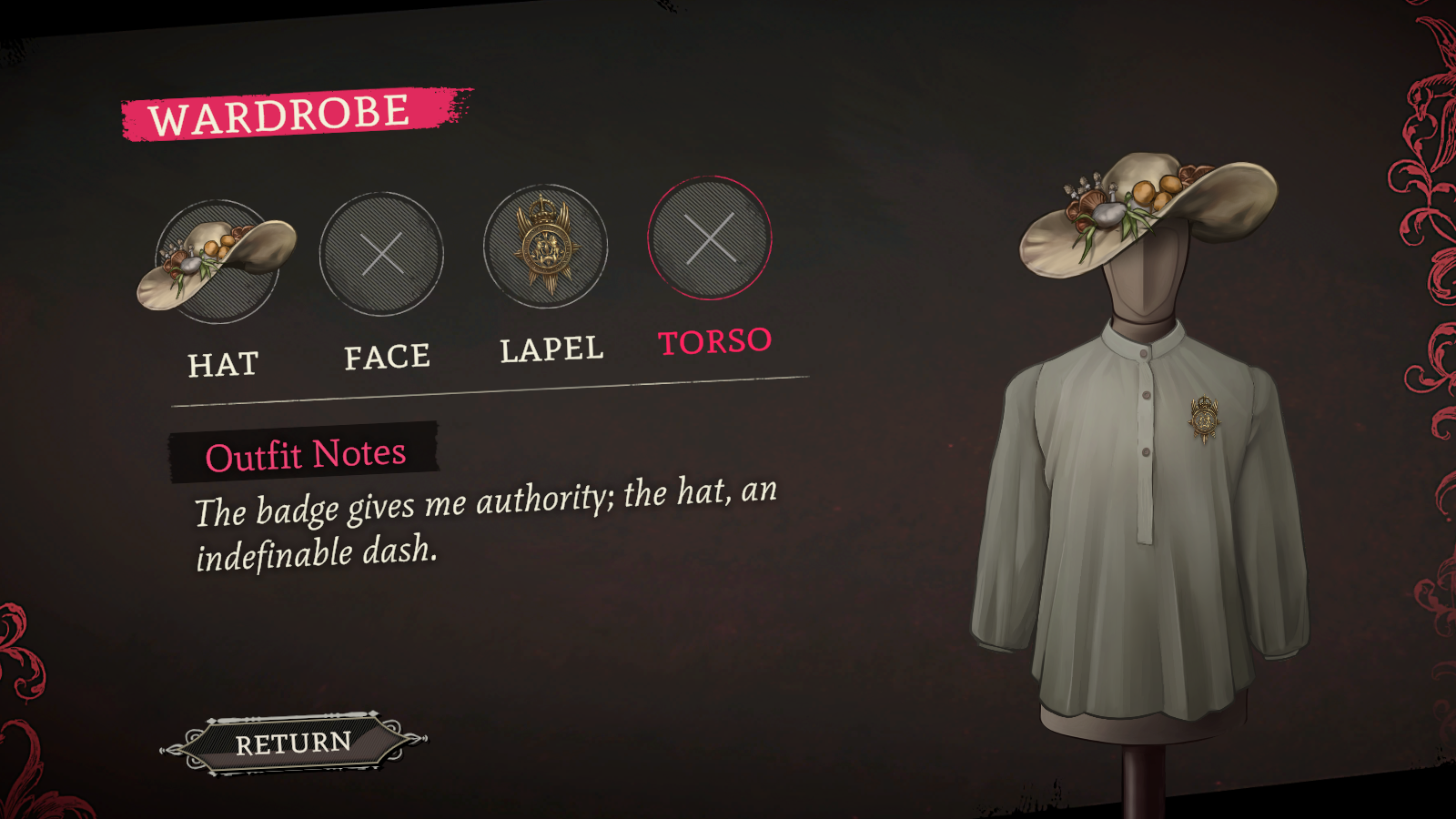 “You could choose to be somebody who wears a lot of aristocratic clothing and has a very commanding personality,” Short says, “and you could play yourself as a very hoity-toity kind of individual, and that will change the choices that you have available to you, the dialogue that other characters have in response to you and shape that whole experience in one direction, or you could be playing as a dock worker and have a very different kind of way of interacting with people.”

You could play yourself as a very hoity-toity kind of individual, and that will change the choices that you have available to you.

There are also lots of procedural things that will determine how a character responds to your inquiries. The game will check if the thing you’re asking them is something they’d be willing to tell you, and if they aren’t you might still be able to push them a little bit, because the consequences of not revealing this information might be worse than coming clean. Instead of just being binary, there’s nuance, and under the hood are all these steps that the characters are going through to determine their response, and then you’re given context—an explanation as to why they’re being reticent.

Some characters will always be honest because that’s in their nature, while others will be a bit more sly. Those relationships can change over time as you get to know each other, introducing new ways to interact. Naturally, you can influence this, but Failbetter wanted to avoid the transactional and manipulative elements that can crop up in both videogame and real relationships.

“So you cannot get into any situations involving non-consensual sexual activity, you cannot override the NPC’s will in really fundamental ways that we felt would be abusive to do,” Short says. “But also slightly more subtly than that, we tried to avoid setting up situations where the player would be motivated mechanically and rewarded for doing things where they make somebody really sad or angry or upset, or whatever, in order to leverage that fact, to advance your game situation in some way.”

This doesn’t mean you always have to be kind to everyone, and you can break promises, habitually lie, and generally roleplay a less-than-stand-up person, but there are of course consequences to this, since this is a game about trust. Failbetter wanted to give these relationships texture, ups and downs, mistakes, because even the healthiest relationships have them, but doing so without encouraging players to treat the characters like objects.

“Part of what I’m interested in doing is making it as rewarding as possible and as natural as possible to react more in a more human way,” Short says. “Whether that’s always overtly nice and kind, or sometimes a little bit less.”

It’s a tricky balance to find, trying to encourage players to find romance and solve a crime, but at the same time not making it so that they’re rushing to a walkthrough to find the most effective way to get what they want. I know it’s a temptation for me, even with the fictional relationships that I find myself invested in, to cheat a little bit to get the best possible outcome. 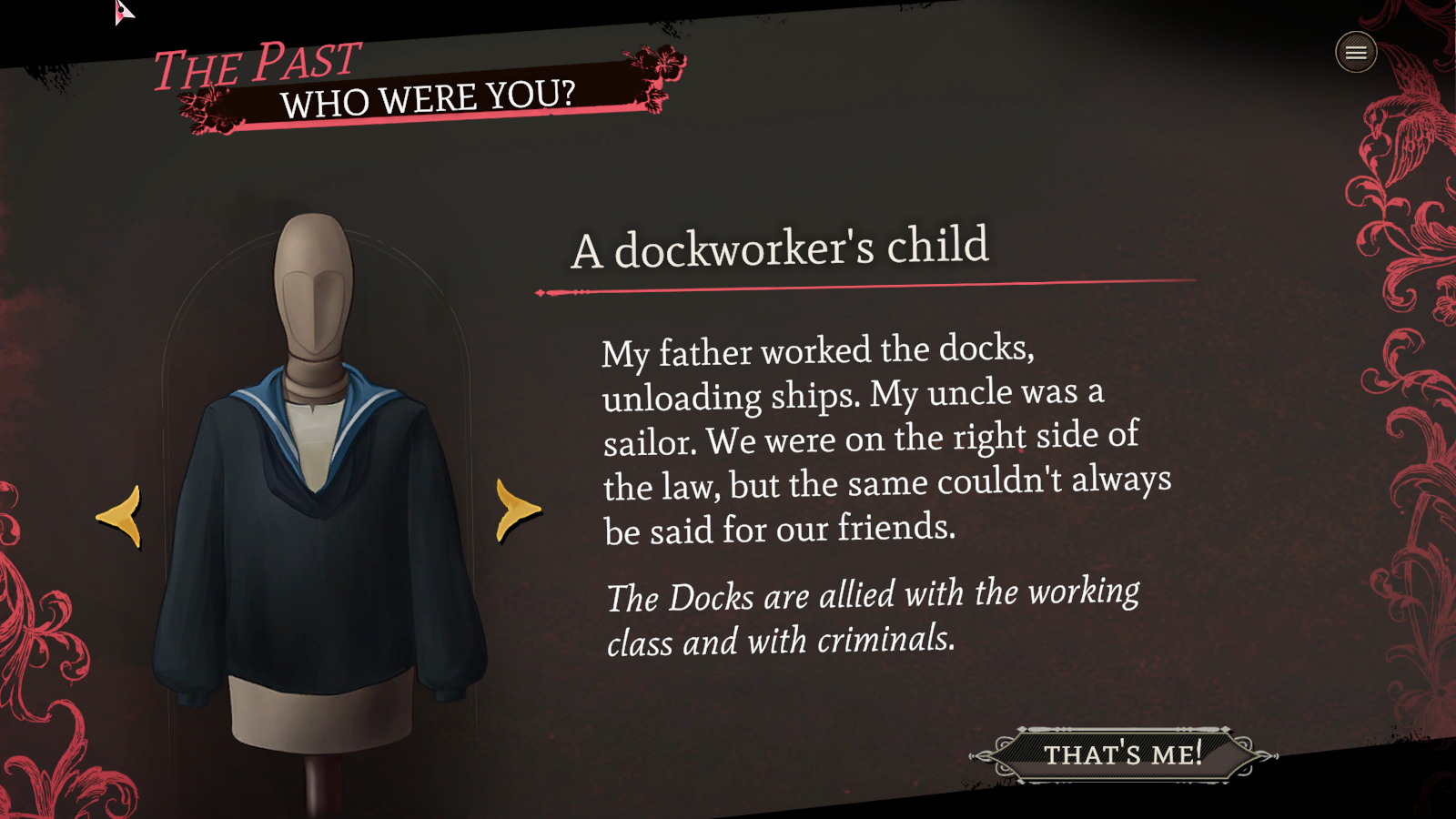 To avoid letting players just brute-force their way through conversations, Failbetter has made each relationship the result of lots of dynamic choices and details—the decisions you made at character creation, what you’re wearing, what information you’ve already uncovered, your current relationship with that character—which opens the door to all these new possibilities, rather than just giving you a dialogue tree that you can power through until you get the “best” result. The reward is seeing this relationship blossom organically.

And the goal isn’t simply to get into a relationship. “I feel like a lot of games make that the endpoint,” Short says. In Mask of the Rose, however, it’s just part of the journey. “We try to make Mask comparatively easy in that communicating to a character that you’re into them and seeing if they’re into you back, it’s not super hard to get to that point, but then to get onwards from there to something that’s a fully-fledged relationship where they trust you enough to tell you their secrets, that’s another story.”

You’ve got to put in the time and decide how to move forward together. Good advice for any relationship. And you’ll be able to embark on that adventure with your paramour, or help your friends find love, this very minute, since the Mask of the Rose demo is now available on Steam. You won’t be able to see how all your choices play out, though—for that, you’ll need to wait for launch, which is expected to be in late October or early November.