Reality matters a heck of a lot here, but not in the way I expected it to. Reality is what I believe I can see, hear, and feel. It’s the dusty laptop where the code-people who die when I turn it off live. It’s the cockroaches of my mind hiding in the air conditioner. It’s the monster holding me tightly as it pierces my skin with a single sharp claw. It’s the living corpse in the kitchen that is definitely there until it definitely isn’t. It’s all the things I must never, ever, touch.

You don’t need to be familiar with Milk Inside a Bag of Milk Inside a Bag of Milk to play this sequel, which is appropriate for a tale that views a firm grip on reality as something that must be lovely if you’re lucky enough to have it. Playing the first game also doesn’t offer any practical solutions to the problem my other selves face here, and so I watch this new me rapidly shift from confidently claiming I have no need of any me but my lone self to begging voice-me to stay. When I get a chance to reply as voice-me I am sometimes given the choice to be supportive, or mean.

Breaking these swirling moments of confusion and contradiction are yawning silences. Milk Outside a Bag of Milk Outside a Bag of Milk is content to let me stew in my own thought-juices during uncomfortable stretches of calm, leaving me with nothing to do but ponder the latest “silly” worry rushing through my game-self’s head. I have to wait for the next busy thought to consume every cell of this other me’s being as the dreamlike background distractingly shifts—these three mes exist in a single room that is warm and welcoming but also prone to dizzying changes of perspective. 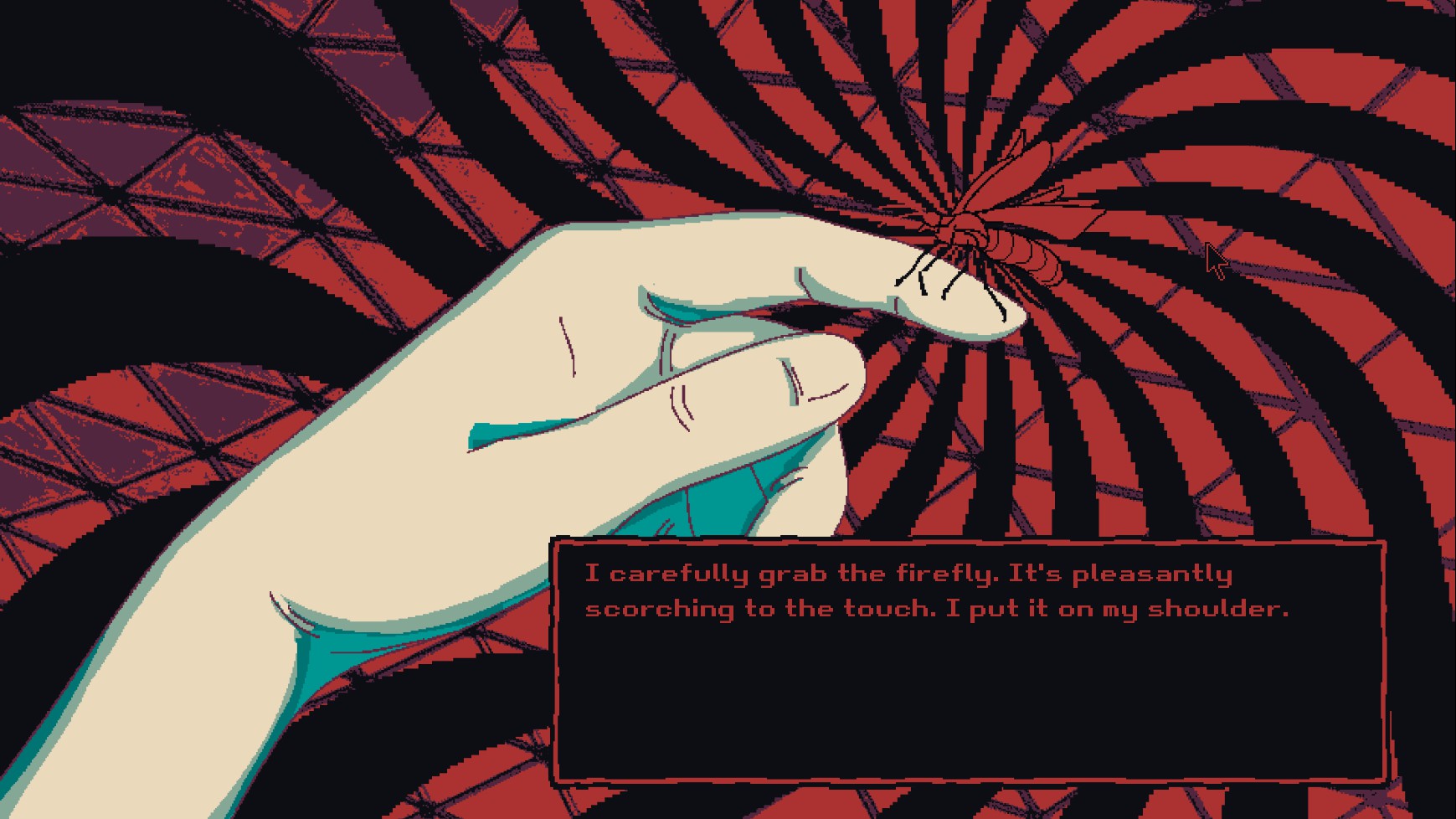 Medicine bottles sometimes loom so large in screen-me’s thoughts they fill my vision, and sometimes are so irrelevant I couldn’t tell you where they are at all. Occasionally little shafts of lucidity pierce the dreamlike haze: I try to prompt myself, via voice-me, to focus, to have one safe, sensible thought and follow it through to its conclusion.

But it doesn’t work. Instead I get a story about this other me’s last day of school, recalled at first as if school simply, suddenly ended. Dad. A car ride. Home. Done. Further poking and prodding leads to the same event retold. I was being physically dragged out the building scratching and biting, and not for the first time. At this point no version of me, including the one sitting in front of the computer, knows whether this is how it actually played out or if I’m sliding into another self-destructive cycle of invented reality, all the better to align with the personal “truth” that I am weird and a constant problem to those around me. All I know is that I can’t talk game-me out of thinking that way.

Multiple endings conclude this short and visually striking adventure, all of which resoundingly deny me my gamer’s reward, the happy ending I deserve because I dutifully played until the credits rolled and did the right things. No matter how hard I try or where I click there is no reckoning with the shadows in this temporary me’s head. There is only another tomorrow and the knowledge that I, with myself’s help, have somehow made it through the day. 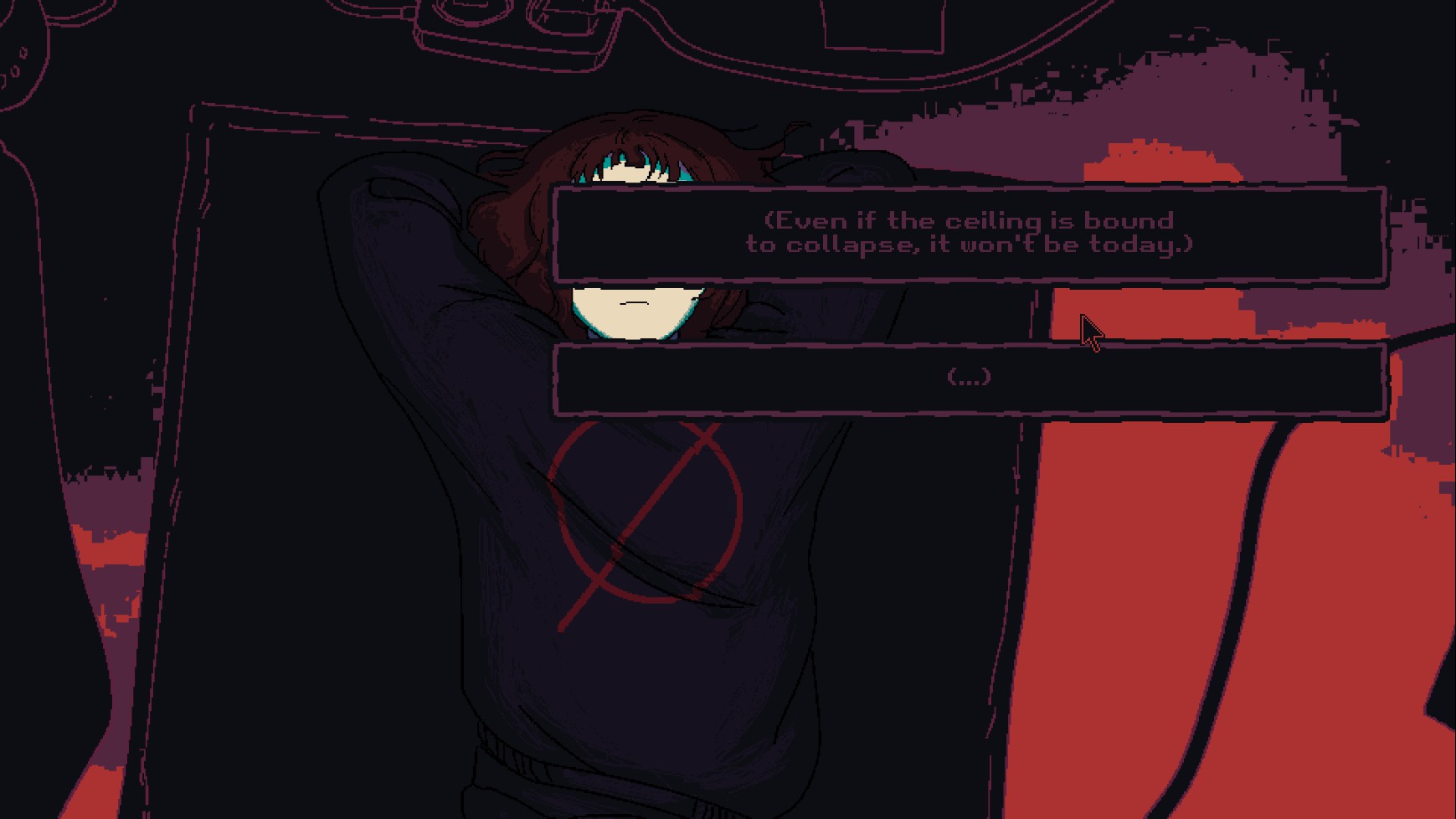 This lack of answers or any insulting magical fix for a serious and all-consuming state of being hit my soul with the force of a hurricane. There’s a natural urge for outsiders to assume they can help someone who’s struggling like this, and perhaps also to wonder in ignorance why the other person can’t just snap out of their current state. Milk Outside a Bag of Milk Outside a Bag of Milk, by taking us on such a personal journey from the alternative point of view—the one too often patted on the head and told to take its pills so it can hurry up and get better—shows what victory can look like when every lived moment is a struggle, and the vast effort it takes to get there.

Protagonist-me is clearly ill in a nonspecific way and has been for a long time. But in spite of that she’s trying so hard. She still wants to find her way in the world, even though she’s beyond tired and takes medicine by the handful. Even though everyone in the store treats her as a problem.

Even though something as “simple” as buying a bag of milk can truly be a monumental task.