Star Wars: The Old Republic’s Legacy of the Sith expansion has gone down like the Holiday Special

Star Wars: The Old Republic’s Legacy of the Sith expansion has not quite been the crescendo of the MMO’s 10-year anniversary celebrations BioWare was surely hoping for. While Steam has seen an upswing in positive reviews since the update arrived, reactions on the official forums, Reddit and Twitter paint a very different picture.

The issues players have raised are pretty consistent: Legacy of the Sith’s story is over and done with very quickly, there are plenty of significant bugs, the UI changes are an eyesore and the radical changes to classes, now combat styles, are a step back.

One of the main common threads is the size of the update. Framing these as expansions has been criticised before, with Onslaught, but the criticism seems much louder now, with countless forum posts and replies calling it out. On Twitter, meanwhile, players are merely responding to the launch tweet with a sarcastic “expansion”, with heavily implied air quotes.

Even by the standards of Onslaught, Legacy of the Sith does feel slight when it comes to missions. At a couple of hours long, it’s brisk, and once you’re done you’ll need to wait for the daily zone and operation, as BioWare is still working on them. But it comes with more significant changes elsewhere, namely the class and story overhaul.

With my alt obsession, the freedom to play through the Bounty Hunter storyline as a Vanguard or start as a Jedi Sage and eventually become a Sith Sorcerer has made me ecstatic. And there are secondary combat styles now, letting you effectively switch classes on the fly—at least with the appropriate legacy unlock, otherwise you’ll need to switch in sanctuaries and cantinas.

This change hasn’t drawn the ire of players, but other class changes definitely have. Their transformation into combat styles came with a huge overhaul of abilities, which has been more subtractive than additive. Some have been outright removed, while others have been turned into choices, where you can only pick one of several you could have previously used freely.

Fundamental abilities, the stuff that’s in your core rotation, have mostly been left alone, but several combat styles do feel like they’ve been defanged. Perhaps this was to encourage players to use their secondary combat style, but getting players to use a new feature by making an old one less effective probably isn’t the best way to go about it. And activating different loadouts requires players to be out of combat and buy the aforementioned legacy unlock if they want to swap outside of a few specific areas; it’s not the same as having a single class with decent utility. 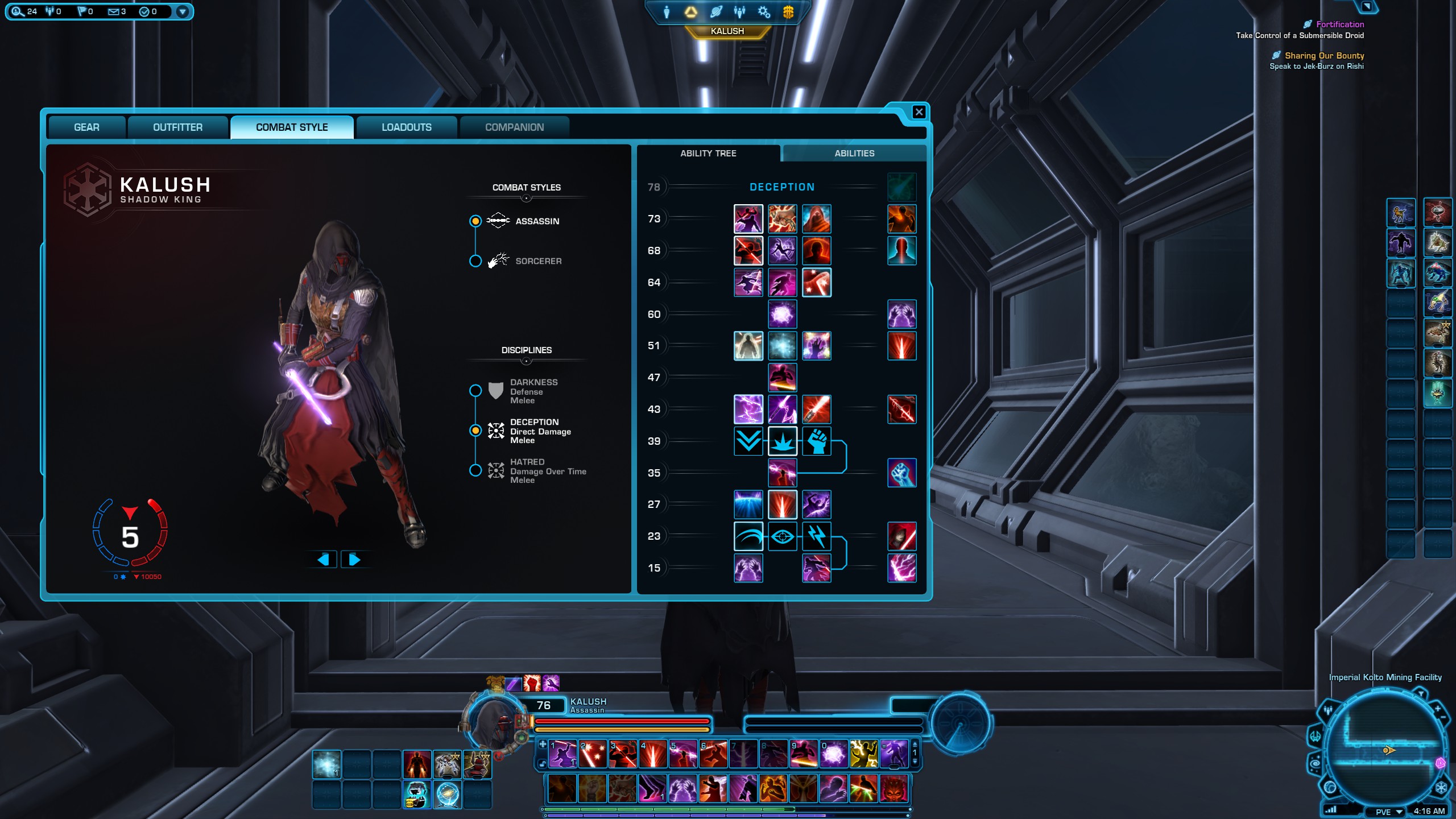 There are also strange incongruities where it’s hard to tell if it’s a bug, a missing asset or a weird choice, like new monochromatic icons that are neither as evocative or as clear as the old ones. The old class symbols were these colourful representations of the weapons and abilities that made them iconic: lightning for the Inquisitor, a flamethrower for the Bounty Hunter. The origin symbols that replace them are black and white doodles of heads: a guy in a hood, another guy in a hood, a guy in a hat, some helmets. It looks particularly strange in the new ability tree, which you can see above, where new plain blue icons sit next to the brightly-coloured old ones.

Players have also noted more serious issues, some of which have been added to the official known issues list. I’ve encountered some myself that aren’t included, like spawning in the wrong place and not being able to leave without teleporting to my ship and then launching the episode again. At least I started where I left off, and in the right place, but it took me an embarrassingly long time, running around like an idiot, to realise it was a bug.

The response on Steam, at least in terms of user reviews, hasn’t been nearly as critical. Since the update launch, there’s been a spike in reviews, naturally, but here the positives far outweigh the negatives, with 158 positive to 19 negative on February 15, and 106 to 69 a day later. Most recent positive reviews don’t focus on the update, however, while the vast majority of negative ones specifically call it out. On the Steam forum, meanwhile, the atmosphere is a bit more downbeat.

Over on the official forums, the community appears to be at the bargaining point in their journey through the stages of grief, hoping BioWare will address the response and using their subs as bargaining chips. So far, though, BioWare has just stuck to updating the known issues list and notifying players about downtime.