Did you know ‘windjammer’ was a slang term for a sailing ship once upon a time? I can see some sense in that name, but I could not have guessed from the name alone that Windjammers was also a ’90s sports game about two opponents locked in an intense battle of competitive frisbee—essentially Pong with special abilities.

Is this a real sport? Not really, but a quick search showed me there is Ultimate Frisbee, which has teams and is played on a big pitch? I’ve learned so much from Windjammers 2, a delightful arcade game I only wish was better at teaching me about itself.

The fundamentals of Windjammers and Windjammers 2 are more or less the same. Not just in controls and design, but in the throwback vibe of their aesthetics, too. The new slick, hand drawn-looking sprites capture those same bold colours to convey an idealized, feel-good 1990s where the sun is always shining and we’re all here to have a good time. Like the bits of old Power Rangers when they weren’t fighting a rubber man from outer space and doing backflips. I’m not immune to this nostalgia, even if its sunny excess barely reflects any of my experiences during the actual ’90s.

There’s a naiveté and easygoing nature to Windjammers 2 that’s endearing, especially as it revels in the absurdity of frisbee as an extreme sport. Though to be fair, I’ve never played a game of frisbee where anyone launched it in a ball of flame—these folks are definitely on a different level.

Matches are pretty straightforward: Each round you’re served a frisbee, and points are awarded to the first player to either hit their opponent’s back wall or make them fail to catch the disc. Specials allow you to knock through opponents’ defenses or hurl the frisbee faster, but the depth comes from all the various ways you can curve your throw or build up speed with ricochets or counters. While the degree of precision that emerges from its simple controls is enthralling, even on the easy difficulty setting there is a steep learning curve, and you’ll need fast reaction times to stand a chance. The smiles and sunshine fooled me for a bit, but Windjammers is as brutal as they come.

When you master it, though, the rapid pace is absorbing. I started by making basic throws and managing little back-and-forth volleys, things moving at a slow and clumsy pace with a round lasting no more than one or two throws. After a few hours however, games became a frenzy of countering and special moves, until I was reacting without even thinking. There’s only a handful of buttons to think about, dodging and throwing mainly (and you should absolutely play on a pad) but there’s so much to the arc of a throw and the timing on a throwback that you can feel yourself slowly moving closer to the screen to analyse every little tick of your opponent.

So much of Windjammers 2, especially against human players, is about that tricky game of deducing their next move. At a hundred miles per hour.  My later matches looked more like Dragon Ball Z battles than the child’s play I began with.

You have several superstars to play as, all in delightful costumes with over-the-top, heavy duty protective gear. They each have varying levels of power and speed determining their throw and movement respectively, as well as unique special moves which are really only discovered through play. The only thing Windjammers 2 has that resembles a tutorial is a “how to play” section on the main menu, a slideshow of text and screenshots which only runs through the fundamentals of which buttons to press. The nuances of play and the significant differences between characters can only be learned through matches, which means eating a lot of losses. I would’ve minded that less if there were a singleplayer mode to sink my teeth into, yet Windjammers 2 offers precious little to those playing alone.

Leaning on its arcade roots, Windjammers 2 sticks to three modes, with two simply being a choice of playing online against other players and offline against friends or the AI. Online is the big draw, as human opponents are far more satisfying to face. Arcade is the closest it gets to a singleplayer campaign, chaining together matches and interspersing them with minigames for a change of pace. The minigame where you throw a frisbee for a dog (which gets its own pair of protective sunglasses) is wonderful and hints at the kind of carefree energy the game could’ve had in spades if it allowed more alternative activities between the intense matches. But it’s all pretty barebones, the inverse of its visual excess. 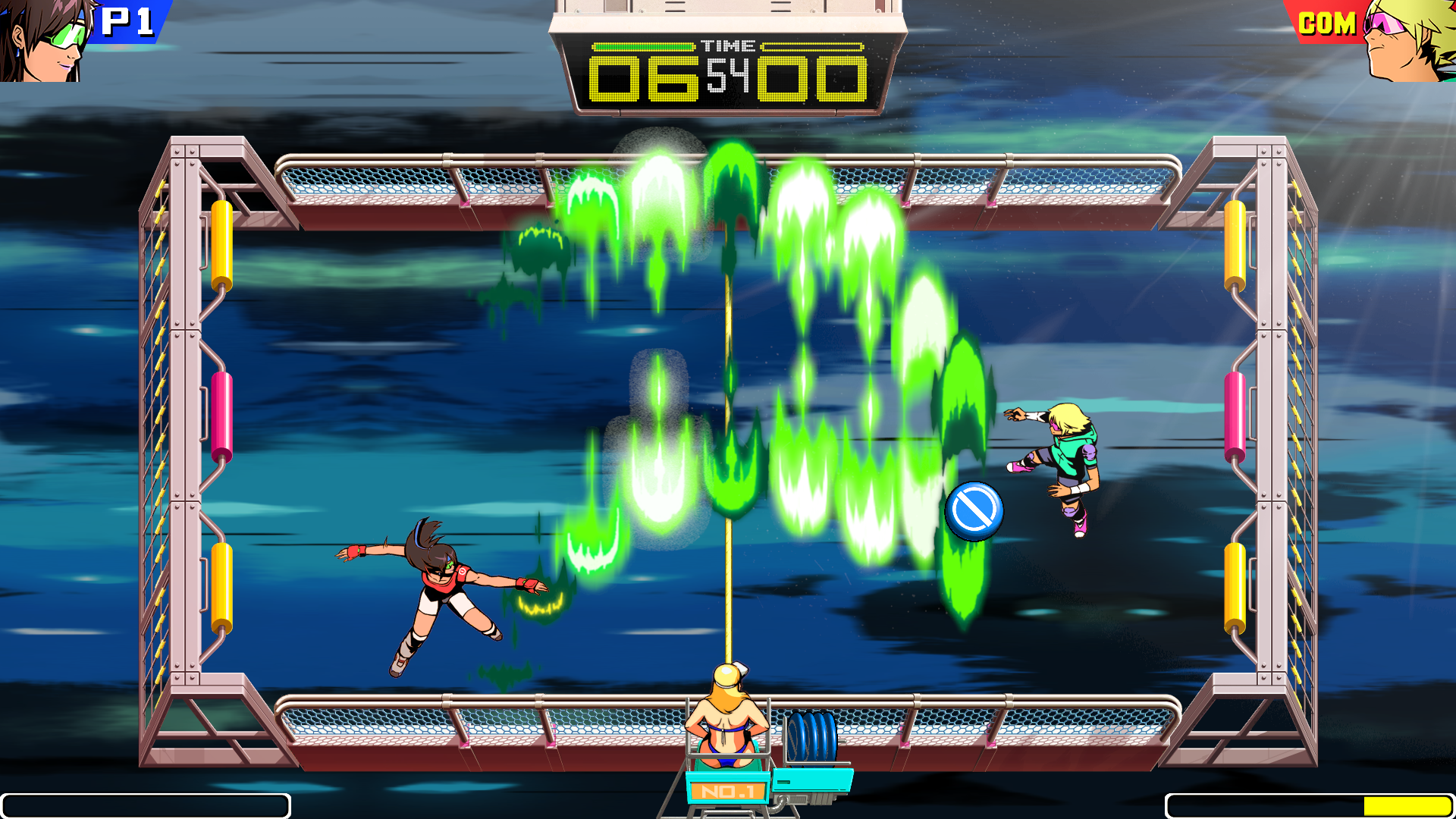 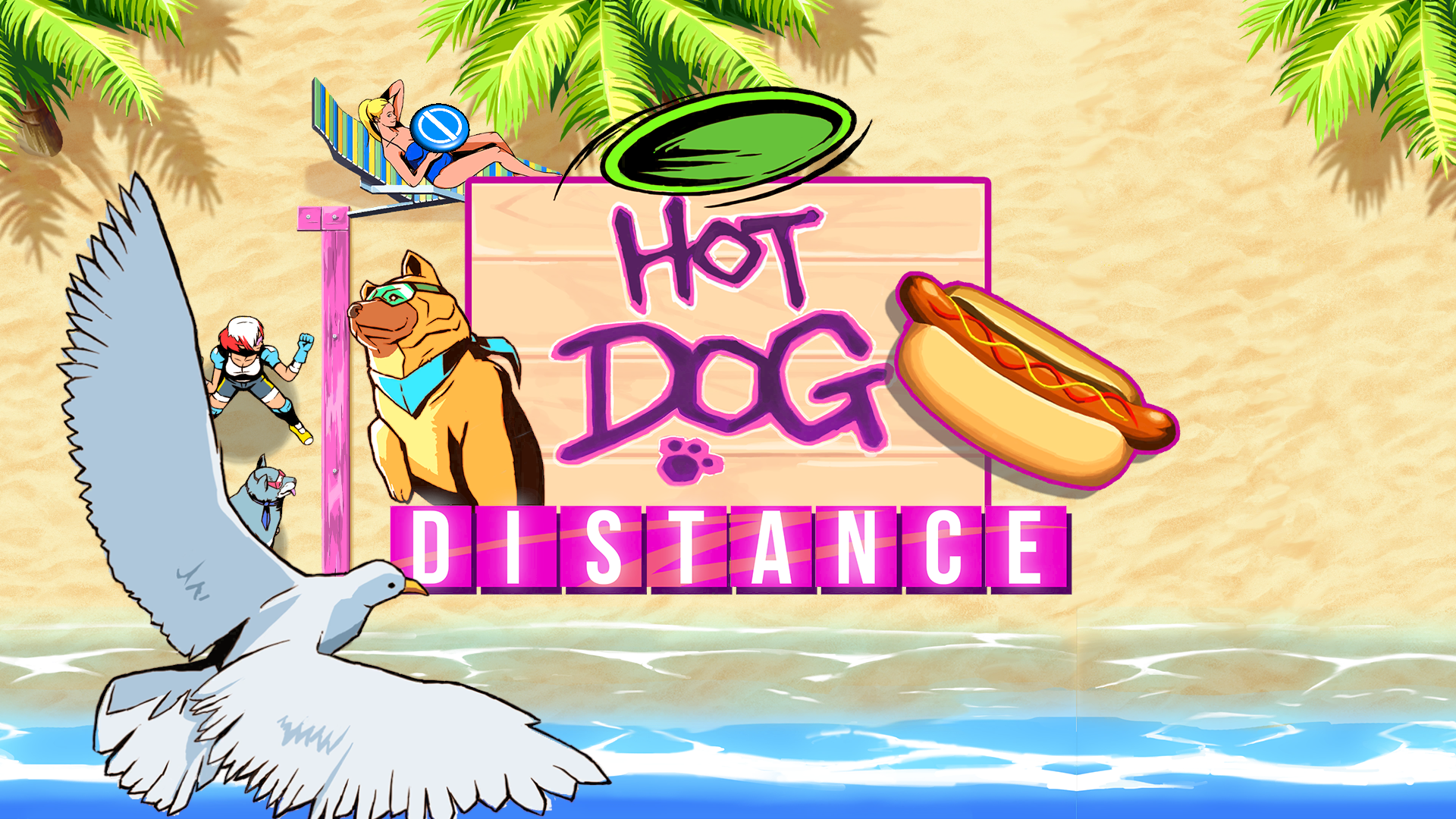 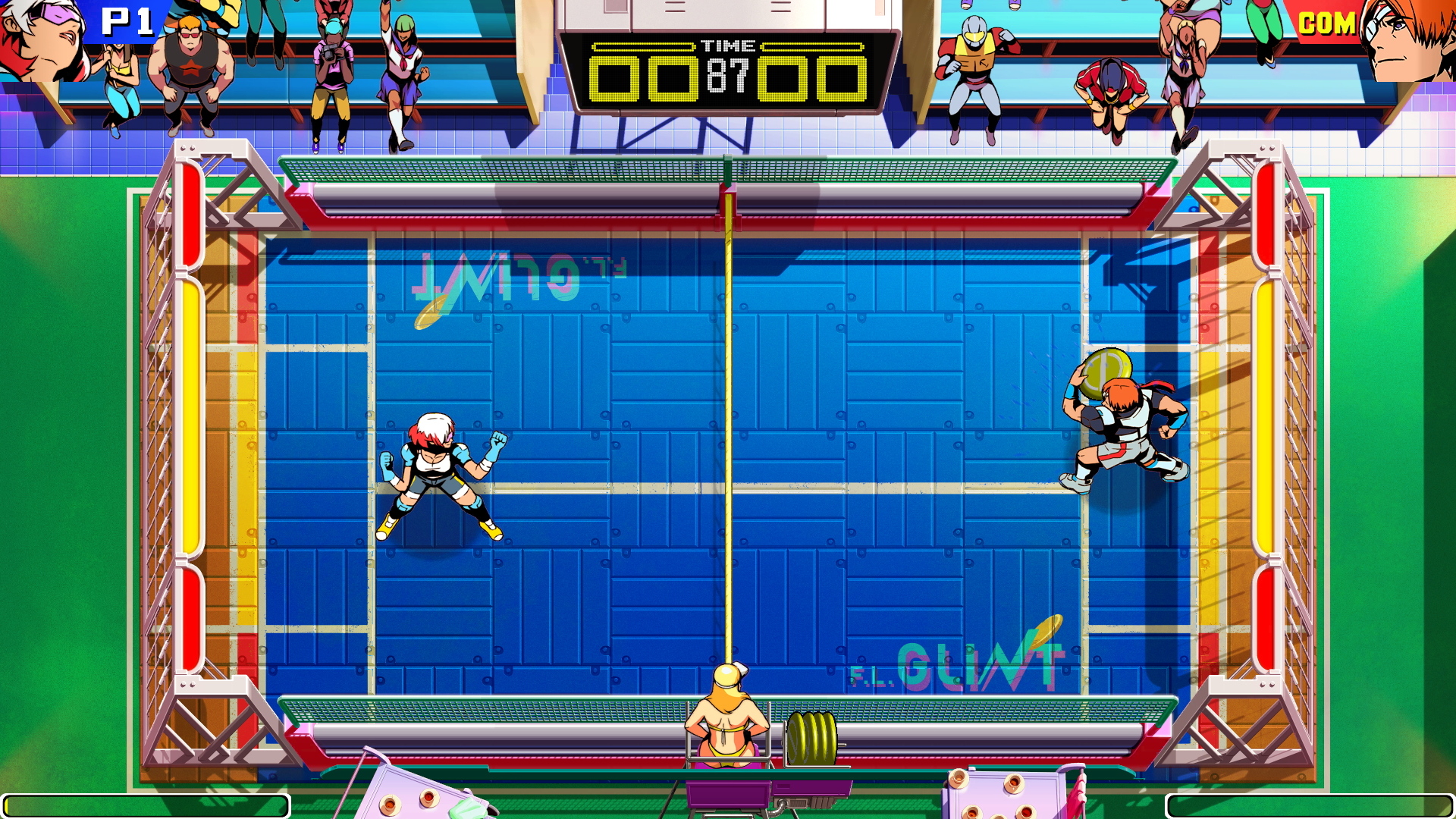 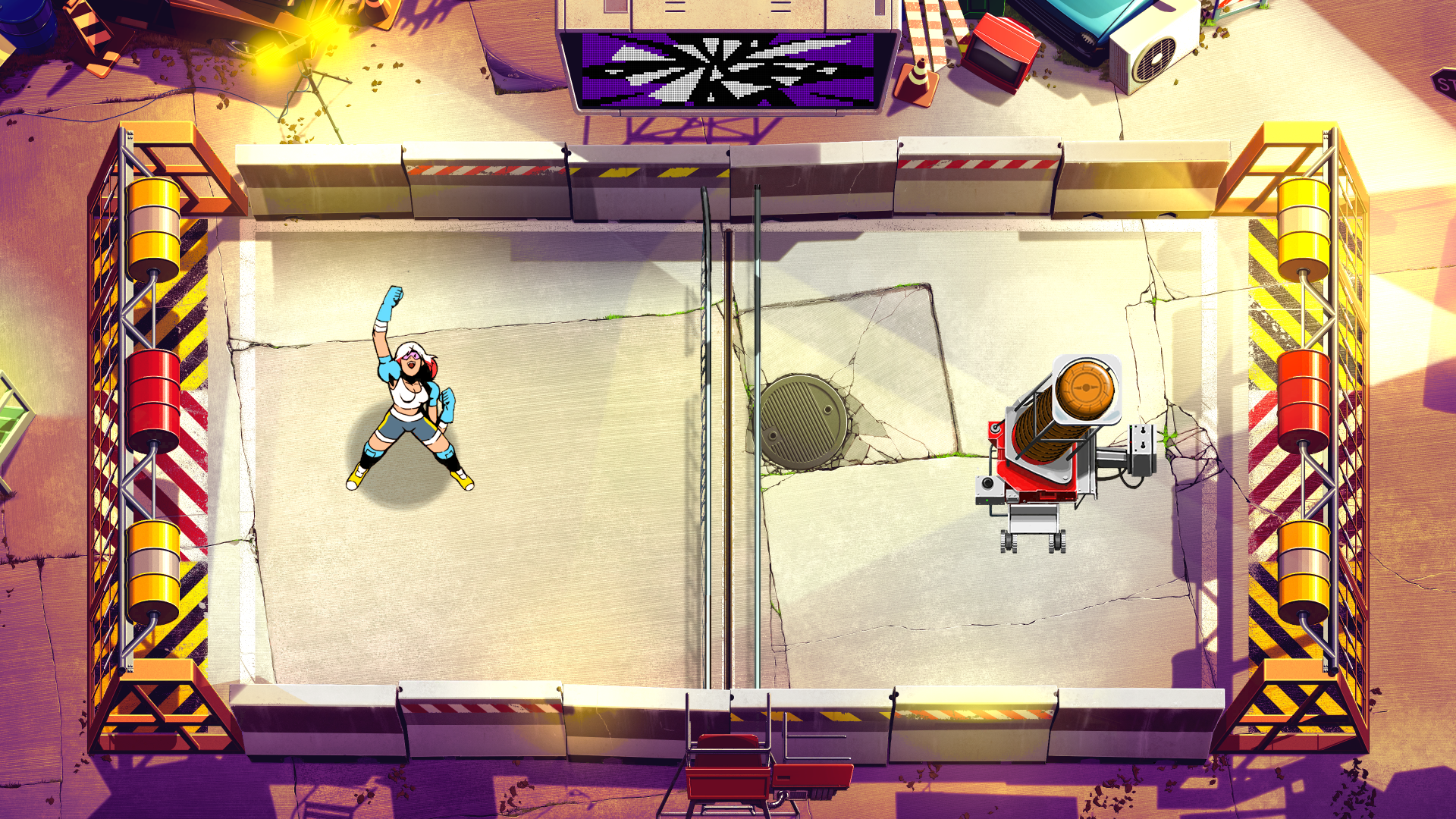 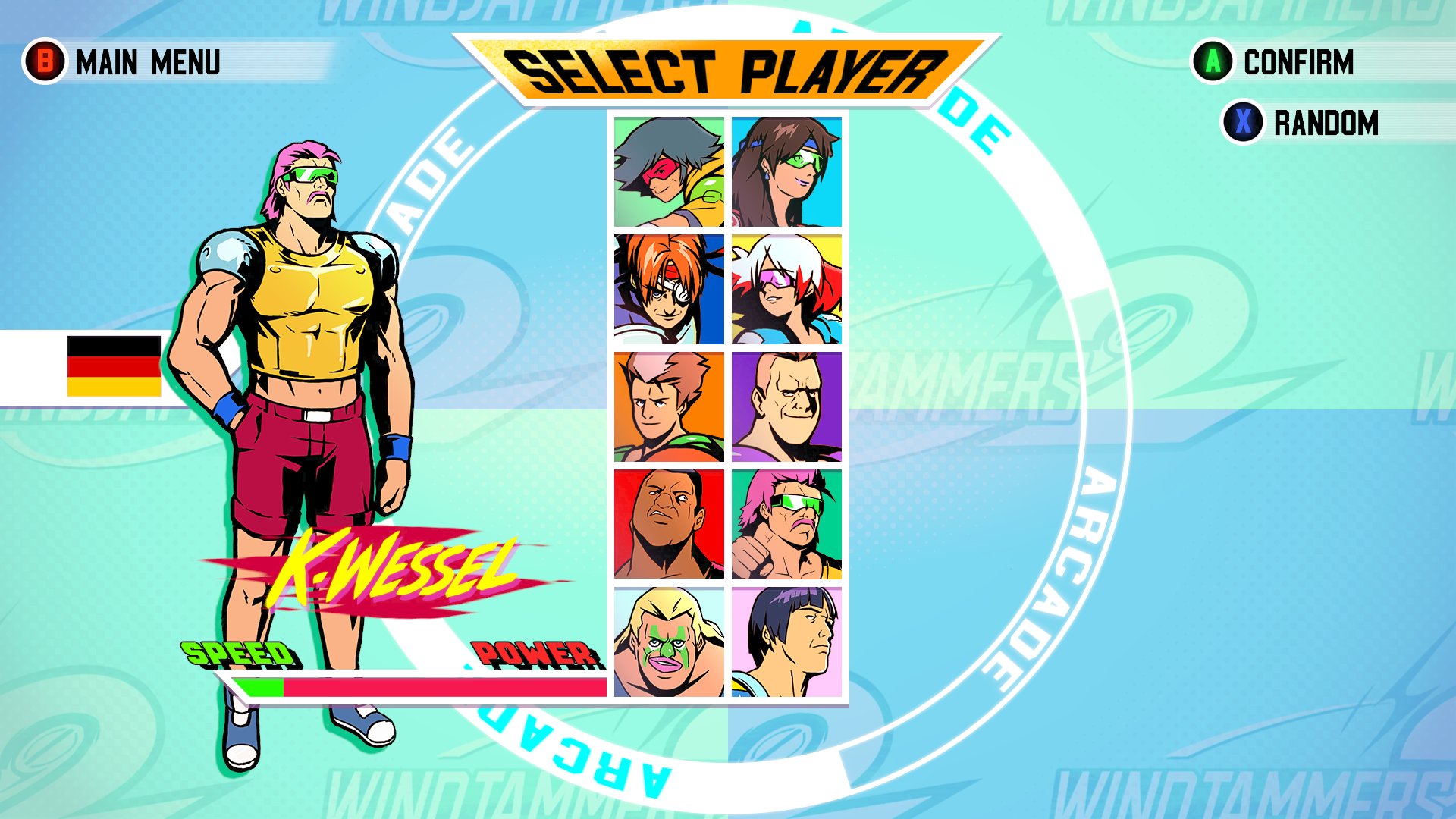 More mini-games and a more involved overarching structure could really have given Windjammers that extra something. As it is, it’s basically the game from over 20 years ago with a new lick of paint and online play that can hold up to the speed of the discs.

Hardcore Windjammers fans (of the game, sailors look elsewhere) will probably be able to mine the nuances of its simple mechanics for maximum depth. I’m sure I’d be impressed watching high level players locked in a heated match. For us amateur chumps there’s plenty of style to soak up, but little of real value to hold attention for more than a couple of hours.

Even on its easier difficulties Windjammers 2 is clearly built with its original ’90s arcade difficulty—punishingly hard—in mind. This’ll probably please those diehards who’ve been playing it for years, but as a newcomer it left me feeling a bit defeated since there’s no way to practice except going through numerous numbing losses. I could see the depth in the controls and abilities as my opponents used them, but with no clear path to learning them myself. The advantages to blocking versus grabbing, jumping instead of dodging, and even figuring out how vital timing is to building up power aren’t things the game makes at all apparent.

Windjammers 2 is a blast when you get into its zone. But despite that joyful core, it feels like a failure to bring this classic game to a new generation. Just as its style is trapped in the aesthetics of years gone by, so too is its approach to design. There a lot to like about it, and for some the stripped down challenge will be a welcome callback, but I imagine most will be left wondering what the fuss is about. Looking at these oldies clutching their neon frisbees wondering… this is really what you were all into? Okay, grandma.