An interview with James Spanos of Wormwood Studios

You asked: we delivered. Here’s a chat with game developer extraordinaire James Spanos, who works with Wormwood Studios and publisher Wadjet Eye Games.

Q: Could you first introduce yourself and tell us about your games?

“My name is James Spanos, I’m a game developer, with the major role of coder for Wormwood Studios, and working for/with Wadjet Eye Games, our publisher. I’ve worked on Primordia and Strangeland, both point and click adventure games released in 2012 and 2021, under Wormwood Studios, but I’ve worked on various titles throughout the years, like The Cat Lady and Downfall by Harvester Games, where I did some interface work for, and Mage’s Initiation, where I worked on the combat system! I’ve been a gamer my whole life, so being able to work full time as a gamedev was always something I aspired to!” 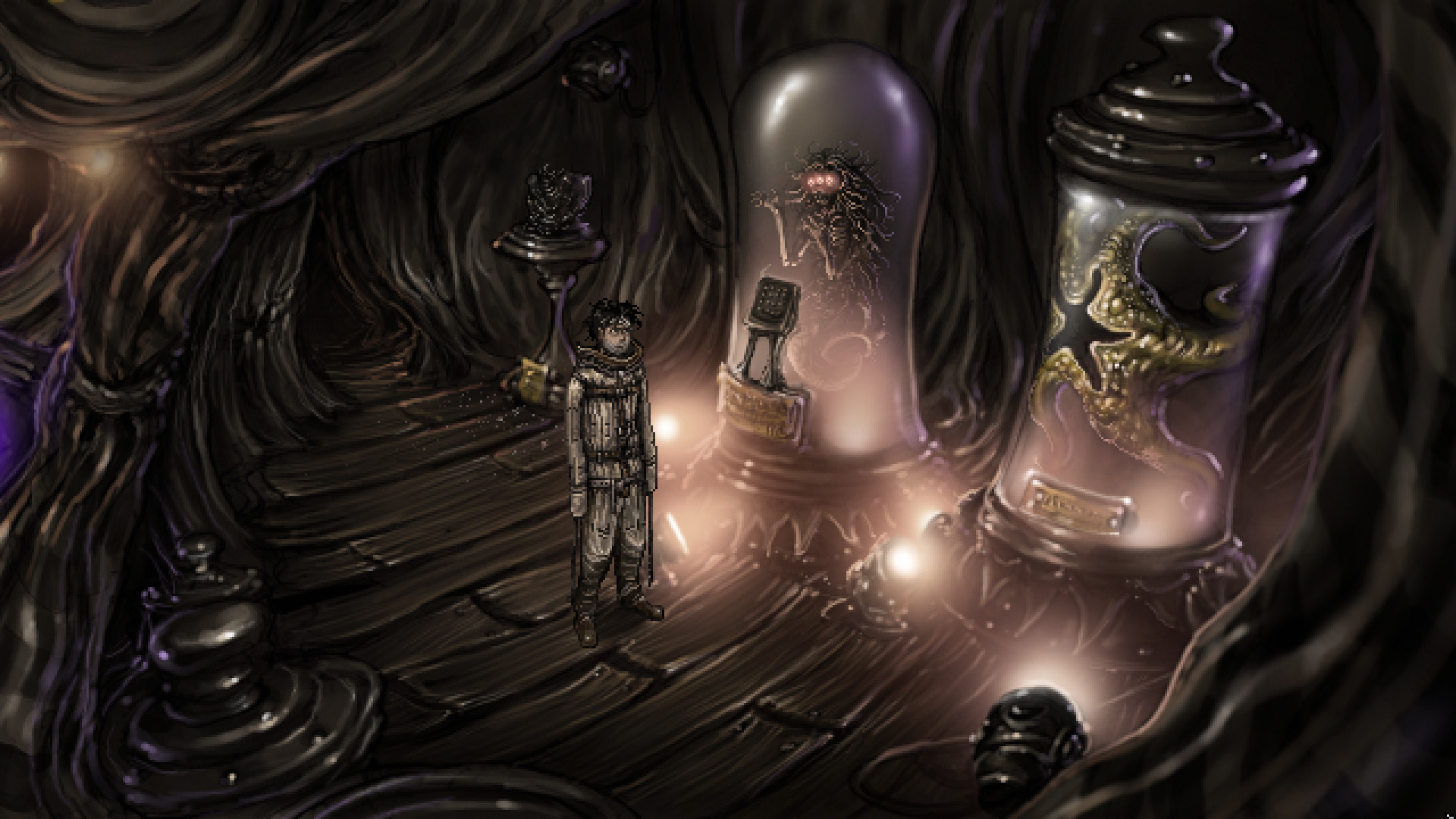 Q: Mark from Wormwood mentioned on Steam, that the Linux version of Strangeland was an “experiment”. How do you feel it went?

“Strangeland’s porting was an experiment in terms of, we had little to no time to test it out properly. Thankfully all the bugs got ironed out after its release. The difficulty with porting Strangeland to anywhere lies on the fact that the game relies heavily on the use of a custom made plugin, that handles audio and various visual effects, so it was quite difficult to test the port and I ended up installing a lot of native and virtual machine distribs of Linux, including Debian, Ubuntu, Arch, I’ve honestly lost count at this point, to ensure the audio system and the game as a whole works under the penguin flag.”

Q: If I have this right, you’ve been something of an absolute machine lately bringing titles to Linux either new or re-porting like Shardlight, Resonance, Technobabylon, Unavowed, Gemini Rue and The Blackwell Bundle. Why the sudden surge?

“So, this past December, Dave Gilbert, owner of Wadjet Eye Games, contacted me and offered me a position to handle the entirety of the WEG catalogue in any capacity. That basically means, I make sure the games have no bugs, store-related things, like achievements work, and porting the games to platforms. It’s been a blast doing that, and of course a decent amount of hours, but I’m glad to say that things are less manicky on that part. The main reason to keep supporting the games, is something that I am personally invested in – I truly believe  that even if the amount of players that play on non-Windows systems are significantly less, it doesn’t mean we shouldn’t support LINUX and OSX, because those players are equal to my eyes and deserve the same amount and support.”

Q: How much effort is actually involved in bringing Adventure Game Studio titles to Linux?

“The effort is quite minimal to be honest, most of it requires testing and ensuring the engine doesn’t have any issues, luckily all these games use the same engine as Strangeland which was thoroughly tested after its release. So long story short, testing the games making sure they can be completed, achievements for Steam can be unlocked (would love to be able to offer GOG GALAXY ACHIEVEMENTS, but unfortunately there’s no native LINUX port of that client], was the main testing ground here for the re-porting of all the WEG titles. And of course setting the store pages, adding Steam cloud that works cross-platform, setting launch options. It’s a lot of small things but all together they add up. “

Q: In the era of Steam Play Proton, do you think it’s worth the effort to do so?

“Even if the games will run fine on WINE, and PROTON, I still think native ports are the way to go. I think Linux is a wonderful OS and a very unsupported one. As a fan of it, I want to be able to offer a version of our games that is not “oh this is the windows version”. It is easier to support the games that way, and we’re impervious to let’s say PROTON being discontinued or abandoned.”

Q: For other developers looking to port to Linux, any advice for them?

“I will say this. Install any distribution you like, I’d start with UBUNTU since it’s very user friendly, and spend some time inside it, see how it feels, how it works, learn the basics and the ins and outs of it, and do port your games to Linux, in most engines, it’s literally automated, there’s absolutely no reason why you shouldn’t offer a native port.”

Q: What do you think about the Steam Deck?

“I’m still waiting to get my hands on a devkit, but from what I’ve gathered it is running LINUX, so that means all the ports, we’ve done for the Nintendo Switch (Unavowed, Primordia) will be easily portable to it, and will offer controller support! I’m quite hyped about it, and I would really like to offer a steam deck version for all our games to the players!”

Editor side-note: the Steam Deck is powered by SteamOS 3 (based on Arch Linux).

Q: What’s it like to actually release a new point & click adventure game in modern times? Games have come a very long way since the days of King’s Quest, Broken Sword, Monkey Island and other earlier titles. How do you see them evolving with the times, or is it more about keeping the nostalgia alive perhaps?

“I think the adventure game genre still has a lot to offer, maybe not in a purebred adventure game fashion, but I think there are elements worth tinkering with from all the games that predate ours. And for absolutely valid reasons. I think instigating the sense of adventure and open paths, like Kings’ Quest and Quest For Glory did prior, still holds up as a game mechanic. And of course the story telling, I think that will always hold up, most of the adventure games that came out during the golden years, have fascinating stories that make people to this day, play them.”

Q: What experience did you have with Linux previous to sorting all the ports?

“For a period of time, I didn’t have Windows installed, so I was “forced” to use Linux, and I quite liked it. I think it was Ubuntu 10.04. So going back to Linux was quite natural, plus as a coder, typing commands in the terminal feels quite gratifying!”

Q: Do you think there are areas Linux really lacks for game developers?

“I don’t believe so, I think the one major problem Linux has, is that major corporations seem to not want to invest into porting their applications/games to it, making it a chore/drag to install certain things. Besides that the amazingly helpful community counters that to some degree, but it would still be nice to make things more official for the end user!”

Q: What’s your favourite Linux distribution and why?

“I never quite understood the appeal of Arch Linux, until recently where I installed Manjaro Arch, and it’s my go-to Linux distrib. Arch seems to run on my system a lot more smoothly than Debian and Ubuntu, but most importantly it seems to be quite easier to install things into it, at least it seems to be more comfortable to my work flow. I don’t think there’s an awful Linux distribution per se – the ones I avoid are those that I’ve kept outdated for various reasons [mostly compatibility].”

Q: What’s next for you? Making more wonderful point and click adventure games?

“I’m currently working on porting more of the games to the Nintendo Switch, and working on a Survival/Resource Management game inside a moving train, called Carbonflesh (made with Unity). Nothing to show yet, because we’re revamping the visuals atm, but hopefully soon I’ll begin sharing things about it. It’s a very different project for sure, and quite fascinating to me! Dave is working on Old Skies, a cyberpunk time-travelling point and click adventure game ofc! So I’ll be porting that when it’s done to places as well!”

Big thank you to James for spending some of their free time to have a chat.

You can check out a lot of their work by looking up titles released by Wormwood Studios and publisher Wadjet Eye Games (GOG / Steam).