Are you after a big, bold but actually affordable gaming monitor? Then the new £390 Hannspree HG392PCB is angling for some of your hard earned. It’s a 38.5-inch beast that combines 165Hz refresh with 1440p resolution. While that’s not a lot of pixels for such a big panel, there’s a clear logic operating here.

Monitors this big tend to offer the full 4K, these days. The problem with that is the demand it puts on your PC’s graphics subsystem, which in turn puts a hefty load on your wallet. Graphics cards of all kinds are pricey right now. Cards that can pump out slick frame rates at 4K? They’re hideously expensive.

In other words, for a relatively affordable monitor like the Hannspree HG392PCB, it makes sense to limit the resolution to 1440p and enable higher frame rates with more modest GPUs. The knock-on problem, of course, is pixel density. 1440p or more specifically 2,560 by 1,440 pixels stretched across a near 39-inch monitor makes for a pixel pitch of just 76 DPI. Yuck.

Of course, that immediate gut reaction is more relevant for desktop work than gaming and video. There is no question this monitor is a bit ugly on the Windows desktop; the big, fat pixels and clunky fonts are all too obvious. If, however, your concern is overwhelmingly, or perhaps exclusively gaming, well, it’s a whole different ballgame.

The 1440p resolution is still a big step up from 1080p. It’s nearly double the pixels and makes for substantially more in-game detail, all the while you’re getting that dramatic and immersive experience only a larger screen can truly provide. Incidentally, the panel also has a gentle curve with a very large radius of 3000R. It arguably doesn’t do much to enhance your immersion. But, likewise, if you aren’t a huge fan of curved panels, it’s subtle enough to be little or no distraction.

Anywho, if the broader recipe makes sense given a certain gaming and value-focussed remit, what about the Hannspree HG392PCB’s detailed performance? This is a VA panel with decent on-paper capabilities. Pixel response is rated at 1ms MPRT and 5ms GTG, plus you get typically strong VA native contrast of 3,000:1 and peak brightness of 400 nits.

As the latter spec implies, there is basic HDR400 certification, but nothing by way of higher end HDR features like local dimming. Input wise, dual DisplayPort 1.4 and a pair of HDMI 2.0 ports are included. 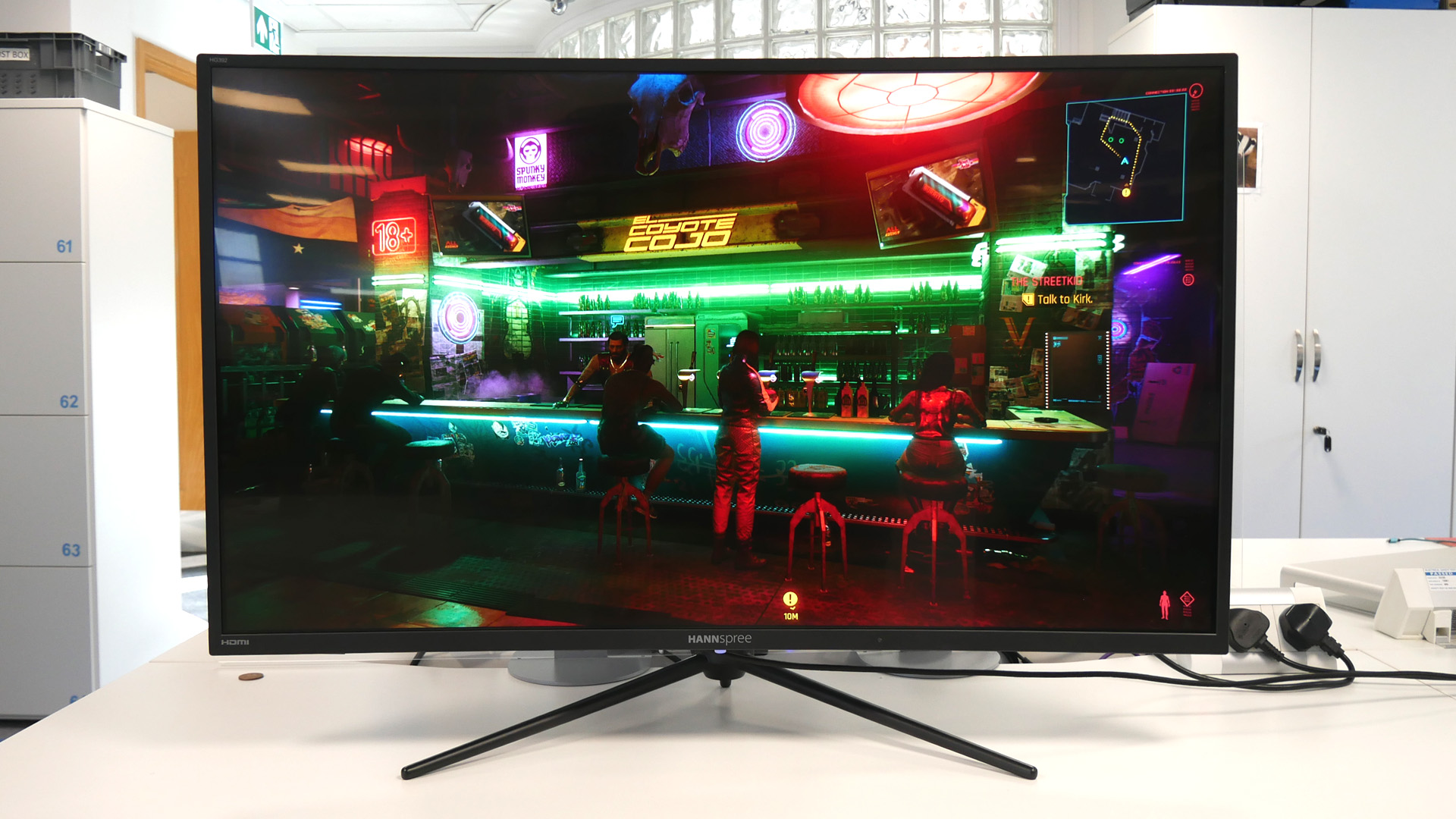 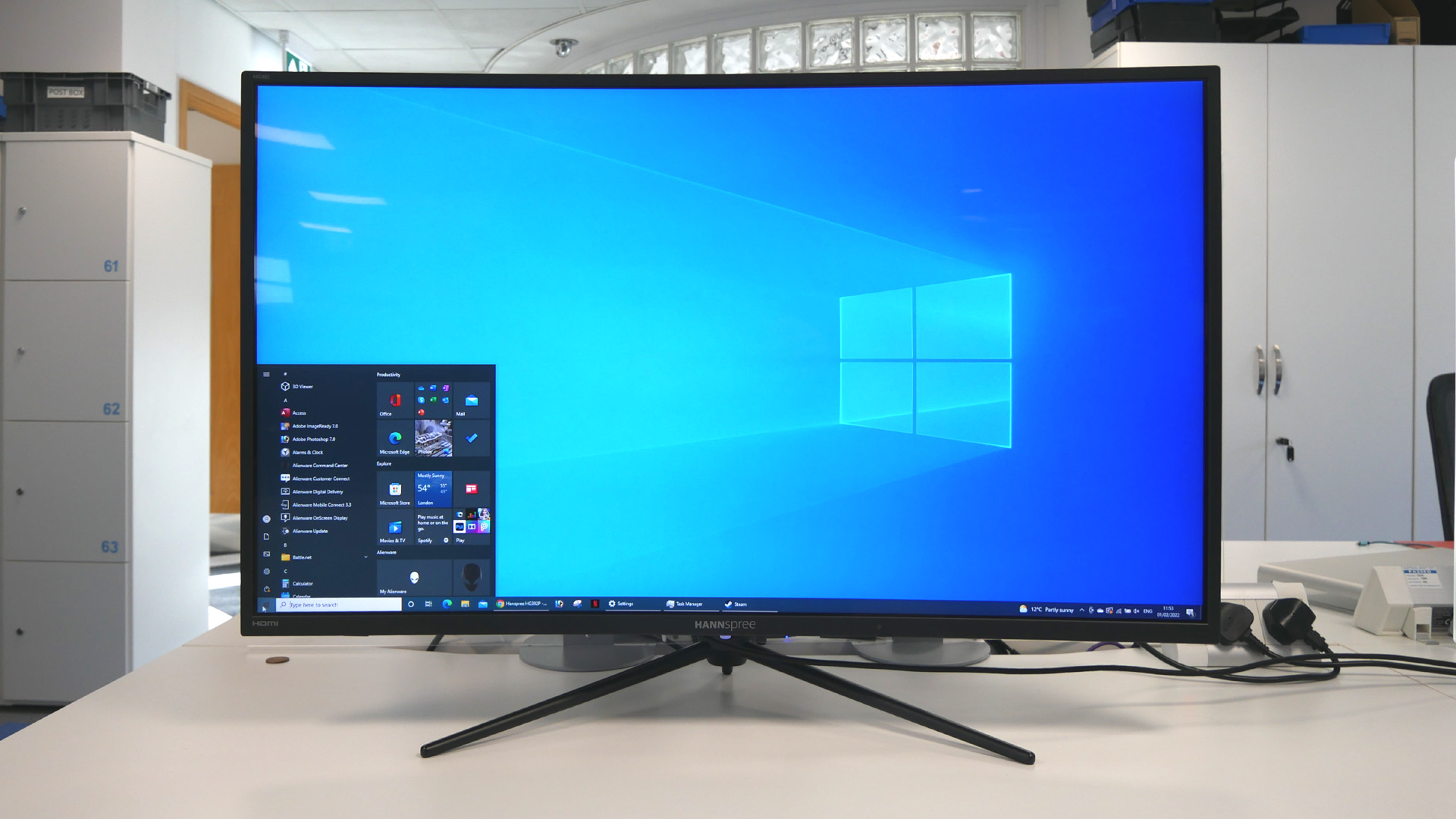 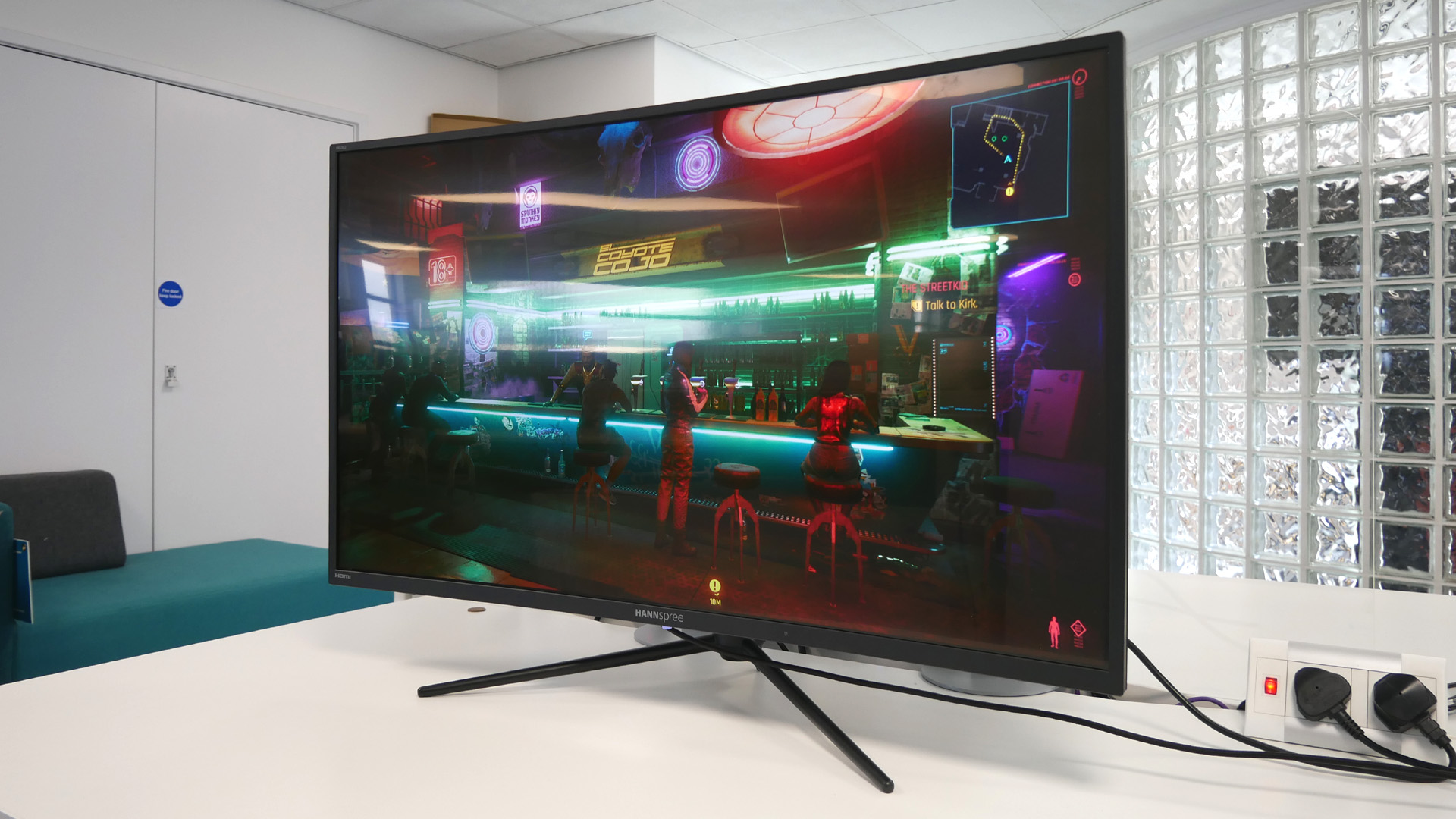 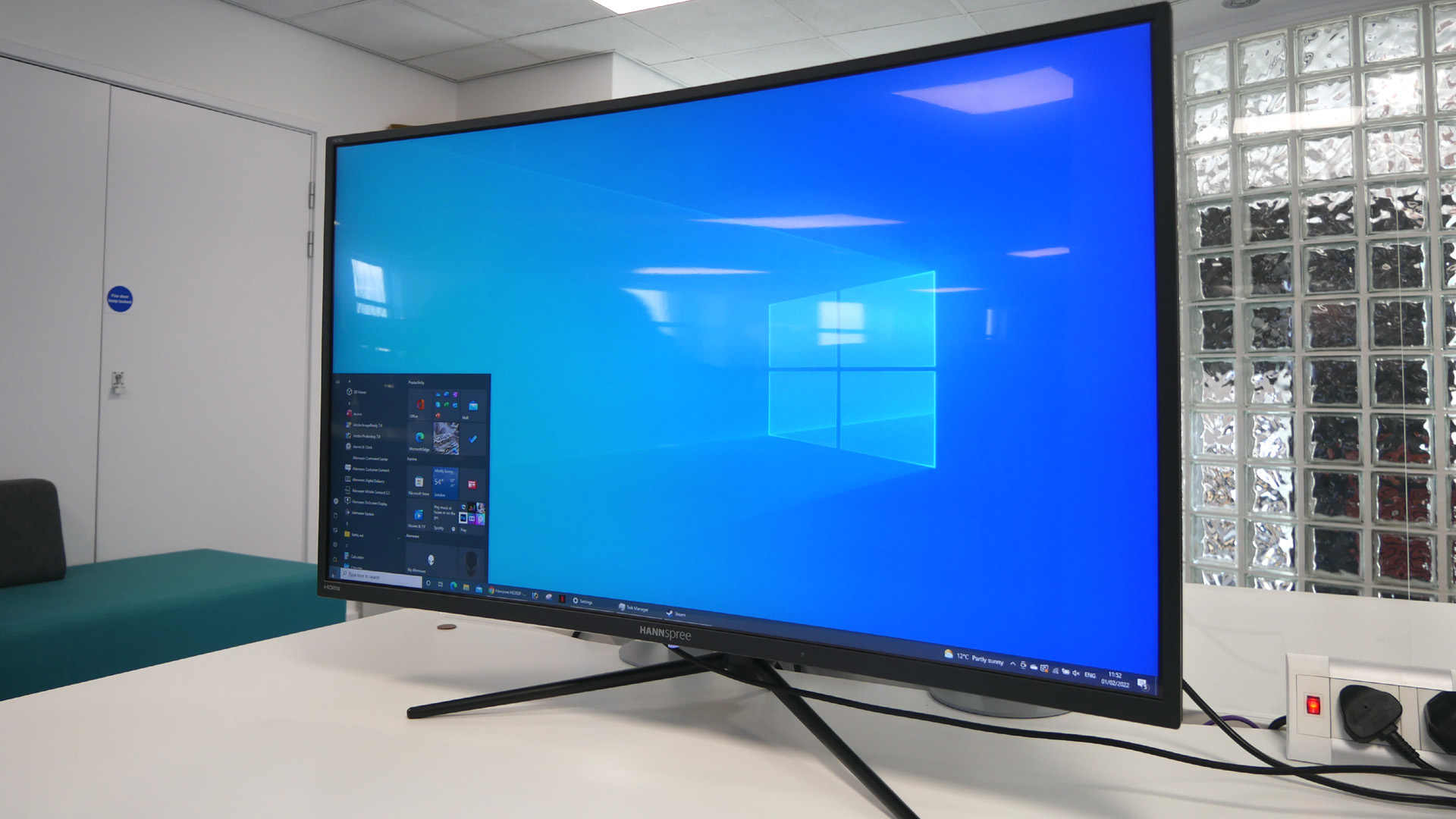 In game, the experience is clearly better than the underwhelming impressions from the desktop. This isn’t the punchiest, most vibrant display, but its glossy screen coating does help to increase the visual pizazz. We’ve seen eye-candy heavy titles like Cyberpunk 2077 looking better, to be sure. The general impression is tilted a bit towards console rather than the typical PC gaming vibe. 1440p on a 27-inch monitor obviously delivers sharper visuals, but that’s the choice you have to make. If you want a larger screen at a reasonable price, some kind of compromise has to be made.

Three levels of pixel-accelerating overdrive are included in the rather clunky and confusing OSD menu. The fastest setting delivers decent response in line with the performance claims, which are good but not stellar, without introducing any obvious overshoot.

Combined with the 165Hz refresh, it all makes for a reasonably nippy but not quite electrifying experience in terms of speed, latency and response. It’s very much in line with what you’d expect given the specs, the price and the use of VA panel technology. Gamers who want something really quick for online shooters would be better off with a smaller and cheaper solution using IPS panel tech.

Less edifying, but not entirely surprising, is the HDR experience. The Hannspree HG392PCB will process an HDR signal and render the colours correctly. But it is not even nearly a true HDR experience, SDR content looks really off in HDR mode and, arguably, SDR mode actually looks a bit more vibrant. Best, then, to forget about the limited HDR attributes and view the Hannspree HG392PCB as a decent SDR monitor. 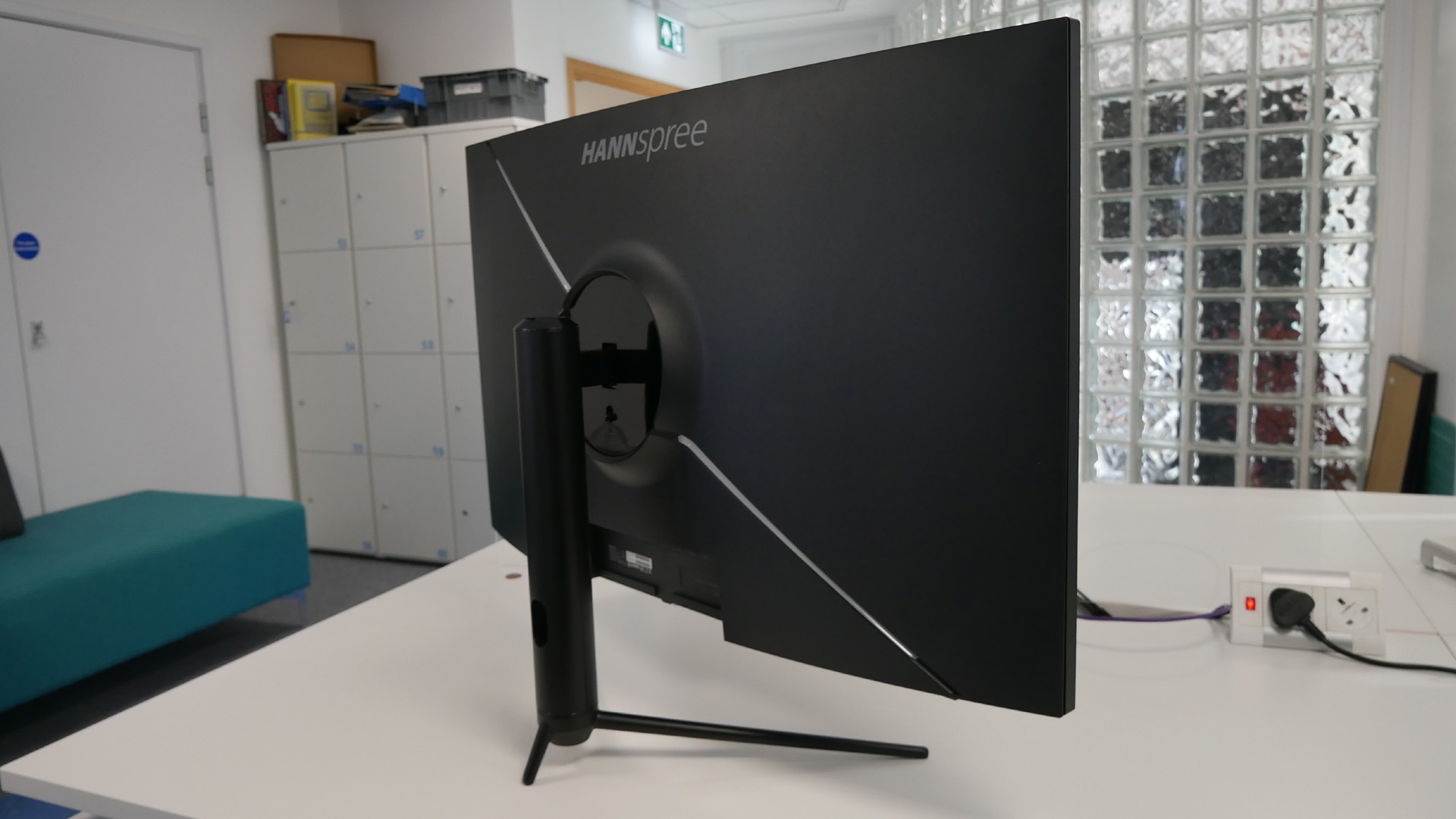 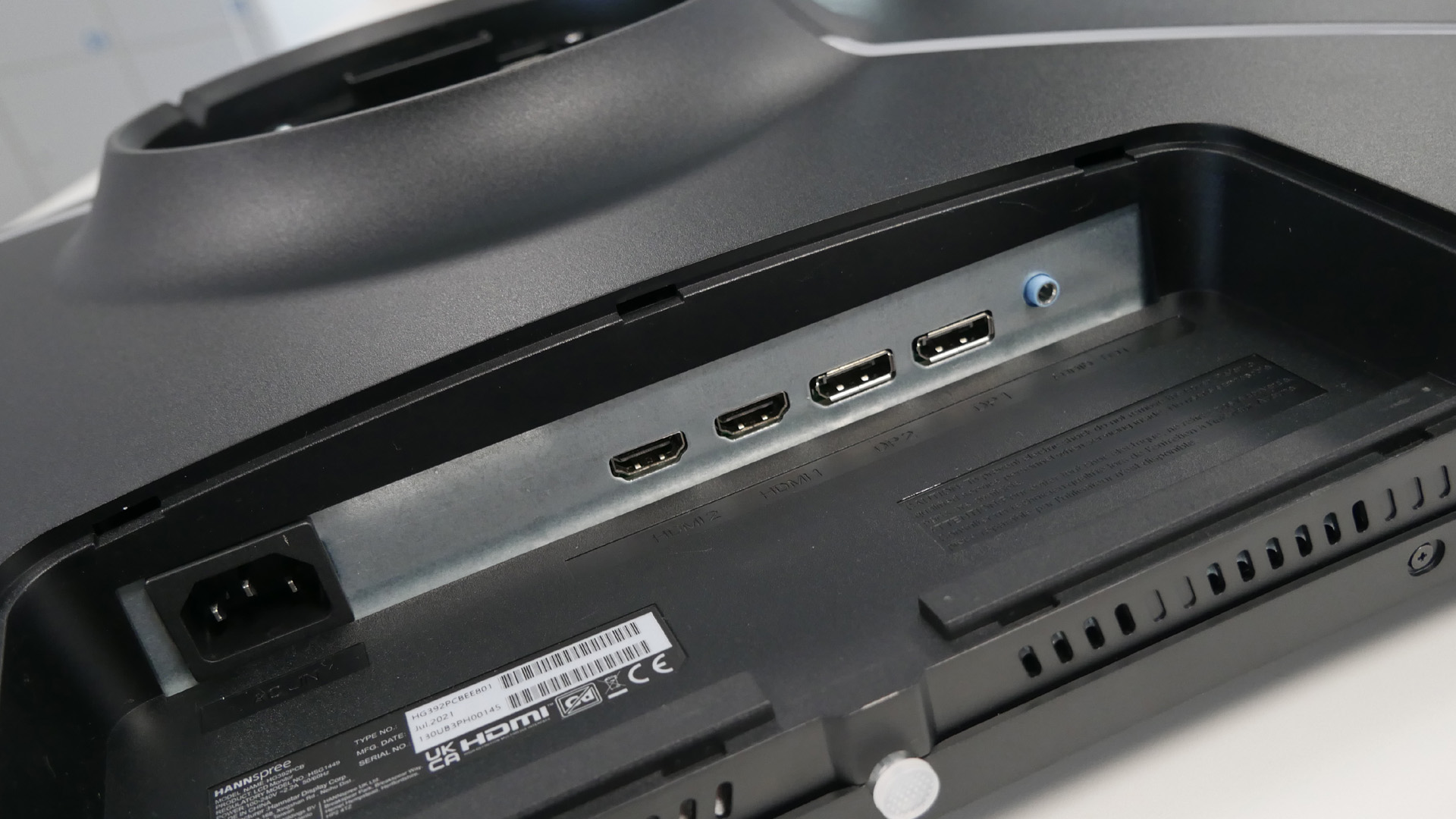 What else do you need to know? Well, the stand and panel enclosure are actually quite high quality and include both height and tilt adjustment. There’s even RGB lighting on the rear to up the overall atmospherics. There’s also a bundled IR remote, which is handy for switching between inputs on a larger display that may well be set well back on the desktop and somewhat out of reach.

All told, the Hannspree HG392PCB makes a decent case for itself at this price point. It is absolutely not the horror show that large and cheap monitors used to be. But it does come with certain limitations, most of which are inherent to the form factor and spec, not Hannspree’s design. If you want a high-DPI experience, this obviously ain’t it, but as an affordable way into large screen gaming with a decent PC-centric feature set, it’s worth your consideration. And, possibly your money.