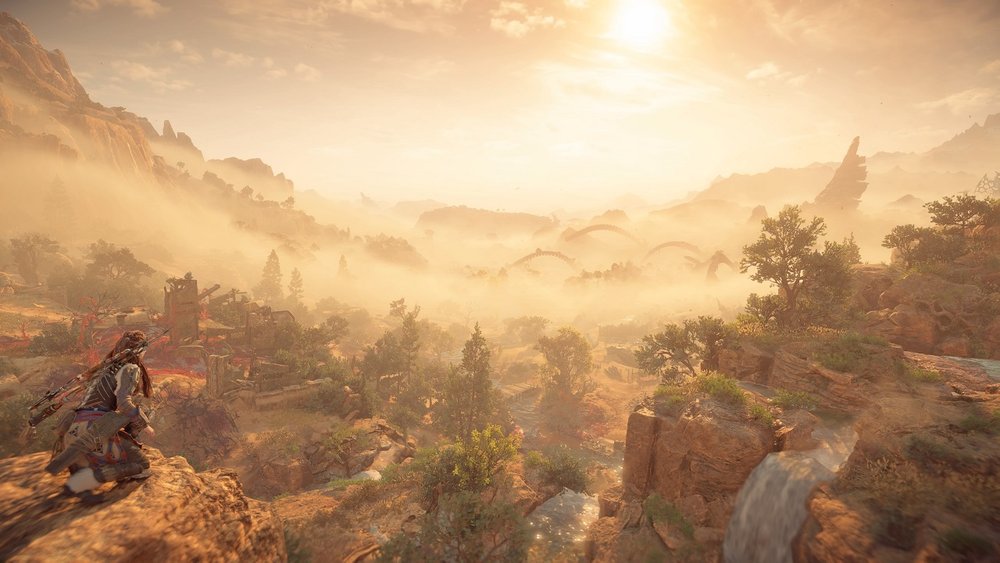 Horizon Forbidden West is finally here! If you’re about to start your first playthrough of the sequel, this guide has some beginner tips you’ll need to know before you head to the far west.

Before you start the game, take some time to go over the game’s Settings as there are a lot of ways to tailor the game to your liking. Remove Motion Blur if it bothers your eyes, change the Graphics settings from 60 FPS to 30 FPS.

If you think the game doesn’t assist you enough in finding specific quests or waypoints, you can set that up too. Remove aim assist, auto trigger the use of the shieldwing or lessen the intensity of the game’s vibration. Customize your experience to your liking.

Kill every animal you see

Resources are important as they are required to upgrade your weapons, armor, and most importantly, your carrying capacity. How much ammo or resources Aloy can carry can be upgraded through the Work Bench, but each one is a separate pouch upgrade, and all of them require a specific resource found in specific living animals like a Squirrel hide.

Since this is the case, best to kill whatever living thing you see, especially if it’s the first time you see the animal in the wild. You never know when you’ll need it’s resources for upgrades. 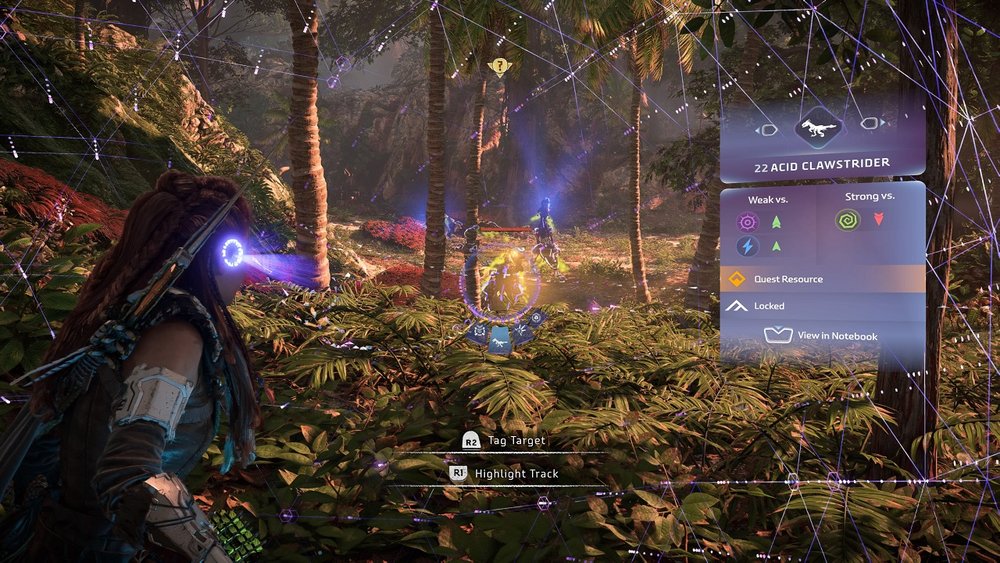 When you scan machines, take note of the resource canisters attached to a machine. Most of them have a canister that can be detached and they provide some good resources you’ll want to pick up.

If you can, shoot them off as the resources in these containers will be lost if the canister is still attached to the machine when it dies.

In Horizon Forbidden West, you’ll be looting chests and dead machines constantly, and almost every corner or new area will have an abundant amount of loot just waiting for you to pick up. Some are hidden too, so don’t miss out on some key resources – make it a habit to scan every new area with Aloy’s focus before moving on. 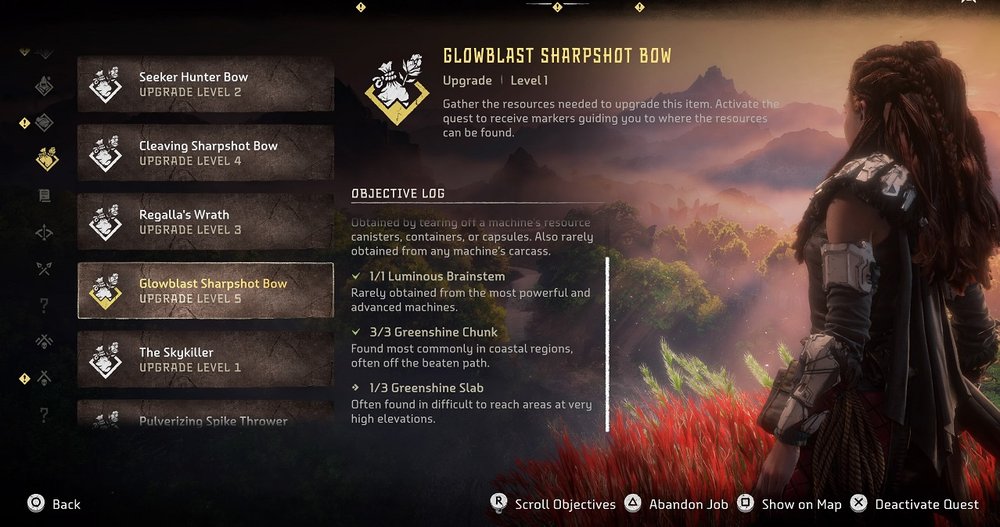 Create Jobs to make it easier to upgrade

You’ll soon find upgrades you can’t do because you currently don’t have the right amount of resources. If you want that particular upgrade right away, you can hunt for the resources you need, and to make it easier I suggest you make use of the feature of creating jobs.

When highlighting a specific upgrade while on the Workbench, press triangle to create a job. This will create a new quest under the ‘Jobs’ category and the game will let you know where you can pick up these resources based on what you’ve explored so far on the map so far.

You can switch your Valor Surge skill even during combat

Once you reach a point in the game where you have enough skills to unlock multiple Valor Surge skills, remember that while you can only equip one at a time, you can definitely switch to another Valor Surge even during a battle. 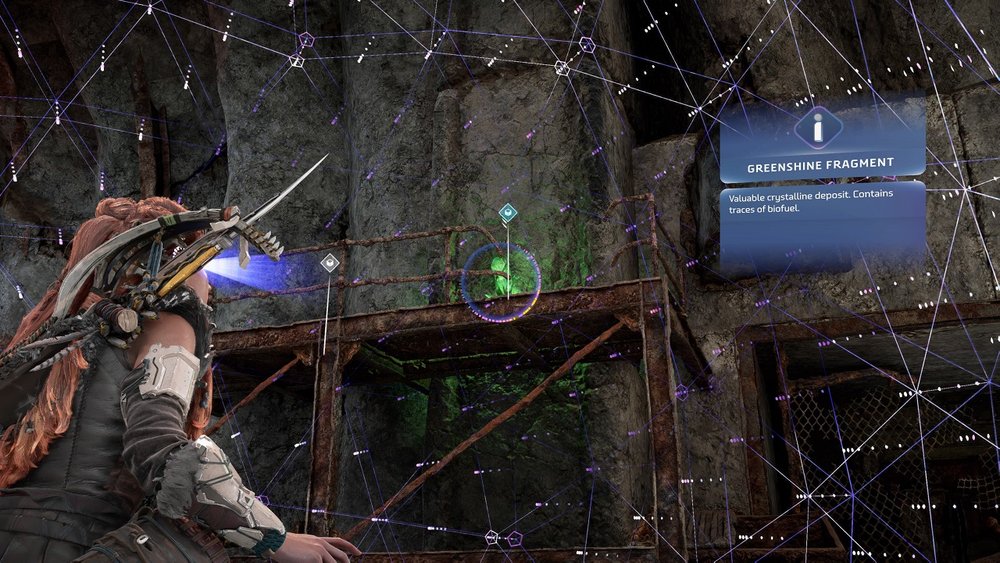 As you progress through the game you’ll come across resources called Greenshine Crystals. These are rare resources used by different upgrades for certain weapons and armor. Problem is, it’s a rare resource as it’s mostly found out in the world sticking out from the ground. If you find an upgrade that requires any of these Greenshine Crystals, think first if it’s really worth using it right now. 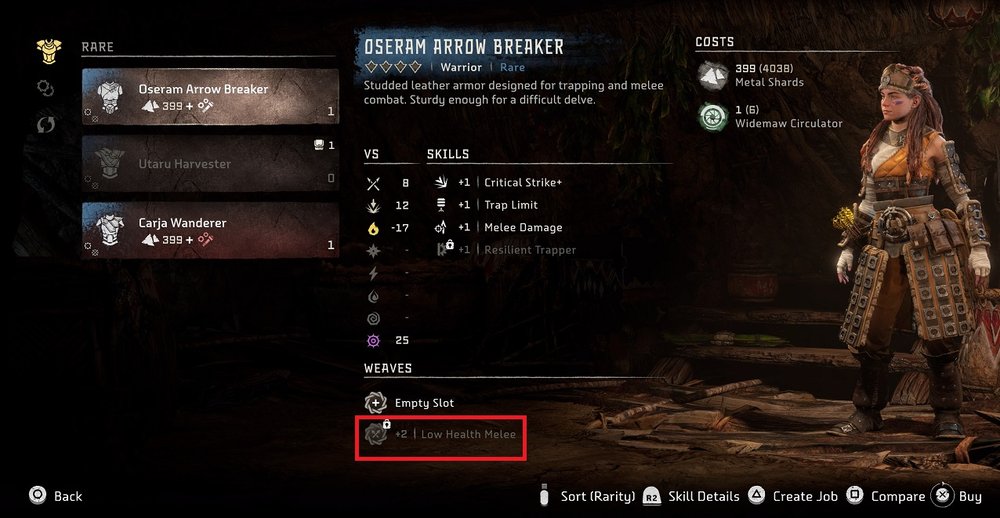 Weaves are add-ons that can be attached to outfits(armor)to add more effects like higher resistance or improve certain skills. Vendors mostly sell resistance weaves only and if you want to have access to skill-specific weaves, you can get them from upgrading an outfit to a specific level. Once you unlock the level with a specific weave, you can detach said skill weave and apply it on another piece of armor you prefer, giving you more flexibility in creating a specific armor loadout. 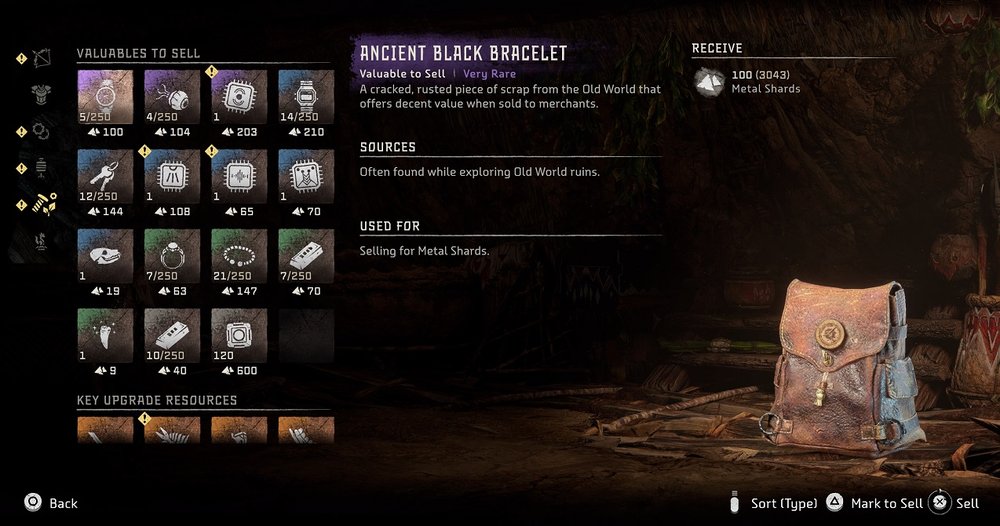 If you hover on a specific resource it will tell you what it’s used for. If it just says “selling for Metal Shards”, it’s safe to sell as there’s no other purpose for it other than earning money.

In case you missed it, and is still wondering if this is a game you’d like to pick up sooner rather than later, check out my review of Horizon Forbidden West for a clear picture of what you’re in for.