I’m not sure what my speed record is for falling in love in a videogame, but the moment I laid eyes on Onbu in The Wandering Village my fate was sealed. Onbu is the massive, six-legged megasaur who handles the wandering in this village-building sim, and I’m in charge of the village, which sits on the huge plateau that makes up Onbu’s back. I immediately love this gentle, lumbering giant, and all I want to do is make sure Onbu loves me back.

That takes some doing.

In The Wandering Village, the planet is slowly being destroyed by toxic spores, and the only hope of survival is to create a sturdy little society on the back of this creature as it trudges across the world. That means the village experiences different biomes as Onbu wanders through them, like arid zones where water is hard to come by and plants have difficulty growing or toxic zones that can infect the villagers and even make Onbu sick. It’s a clever way to completely change the environmental conditions while remaining right there in your little city.

Onbu is sleeping when I start the demo, so in typical city-building fashion I dispatch my 16 villagers to chop trees, gather stones, and start building. I have them construct tents for shelter, a farm to grow beets, and a research center to unlock new tech. Soon there’s a gatherer’s hut to collect berries for food and a device to suck moisture out of the air for water, and each villager task (building, gathering, cooking) can easily be prioritized with the click of a button or by adding or removing workers at each structure.

As I finish setting up my first few buildings, Onbu suddenly stirs, wakes up, and stands. Then we’re off. Slowly, but surely. 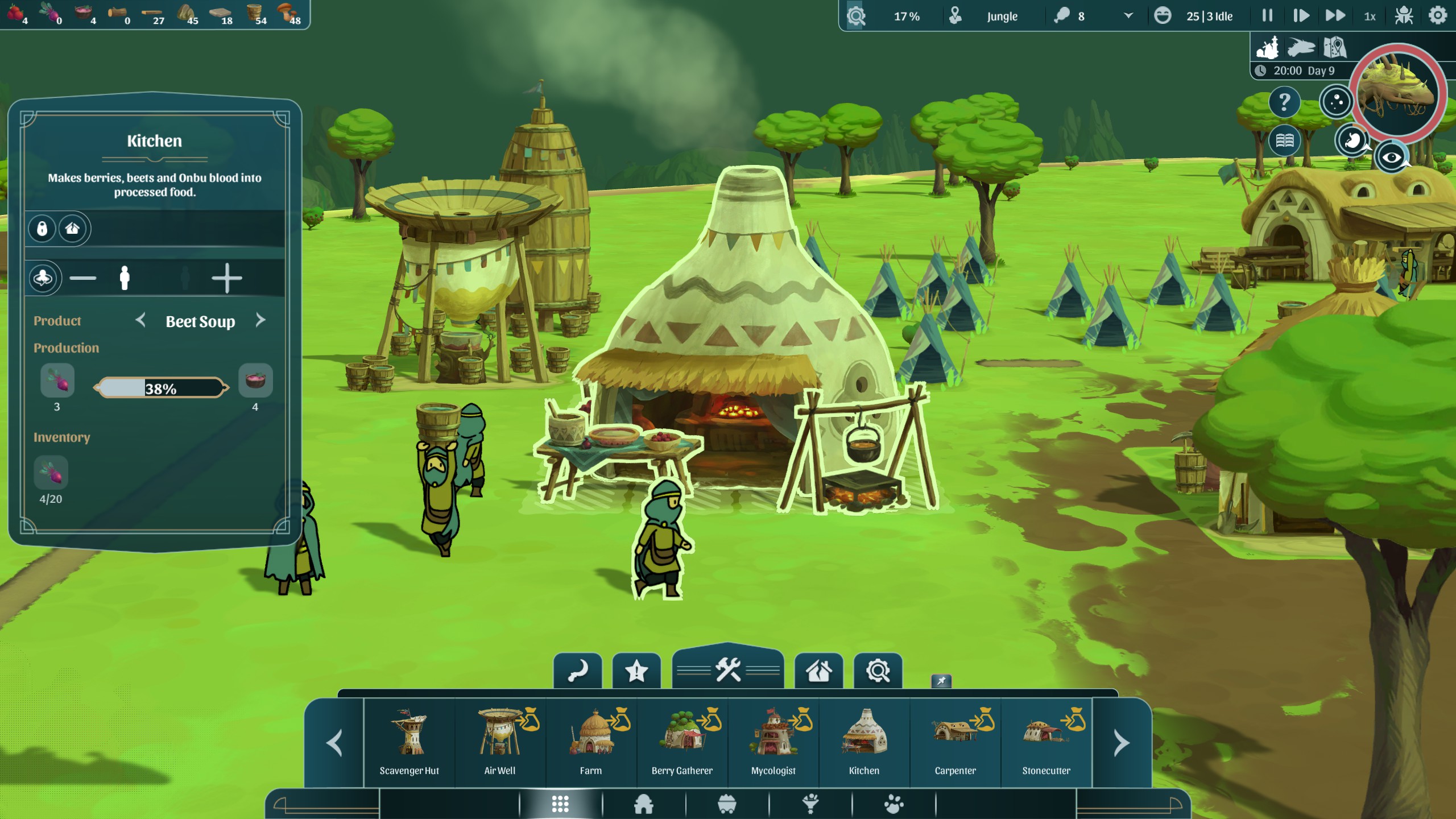 This issue is that Onbu, at least at first, doesn’t give a damn that I’m scrambling around on its back building sawmills and stone quarries. It stops when it wants, it sleeps when it wants, and it chooses its path without any input from me. There’s not even a way to communicate with my gargantuan taxi until I research and unlock a big horn, and even after assigning a tiny villager to toot it, Onbu rarely listens to me when I tell it to lie down, or walk, or run. And why should it? It has no reason to trust me.

That slowly changes, though. I focus on unlocking technology to make Onbu’s life easier, like a food trebuchet. After building a special kitchen to make meals from the mushrooms I’m farming on its back, I have a citizen launch the food out of the village and right into Onbu’s mouth. It’s maybe the most fun I’ve had feeding a creature in a game, ever?

I also build a little hot air balloon so doctors can fly out of the village and cure Onbu whenever it gets sick from the poison spores that cloud the road at certain points. Once I’ve given Onbu a few reasons to trust me, it finally starts listening (sometimes) when I toot the horn with instructions. And that’s pretty important. If we’re headed for a patch of desert on the map, I might want to put Onbu in rest mode while I gather as much water as possible, or assign extra workers to the farms. And, while I don’t know if it helps, I tell Onbu to run through toxic regions, hoping that spending less time in them will lower the chance of infection. It’s pretty satisfying when the big creature listens, but also sometimes when it doesn’t. With a shake of its big head, Onbu tells me it’s gonna do it’s own thang. And that’s fair.

There are some more… pragmatic options in the tech tree, though I find them almost unthinkable. I was horrified to see that there’s a dung collector you can unlock that drills into Onbu’s back, which will lower the creature’s trust in you. And why wouldn’t it? Don’t drill through a creature’s body so you can collect its poo, no matter how much you need it for farming. There’s also a blood extractor, which not only damages Onbu’s trust but lowers its health. The blood can be used to make delicious pudding for your villagers, but, jeez. I don’t think I can use either of those devices. I just want Onbu to be happy, dammit.

I need to keep my villagers happy and healthy, too, which is challenging at times. They don’t really like eating beet soup and living in tents, and their productivity suffers as a result, which means I sometimes run low on food and other resources. I can definitely see the benefits of improving my crop output with some fertilizer, and having some delicious blood pudding would probably make my citizens better workers. But instead I focus on unlocking wheat which I hope to make into bread, and I eventually have enough wood to replace tents with proper huts. Balancing which to unlock first, useful stuff for your villagers or friendly tech for the monster your village is built on, is kind of tricky.

I feel like zoom levels are weirdly important in city builders—it can be a little disappointing when you can’t zoom all the way in to really get a good look at your citizens and what they’re doing (like, say, in Frostpunk). No complaints here in The Wandering Village. Push the camera in and go from a top-down view of the village to a nearly side-on look, and you can really see your little folks going about their business, carrying resources from here to there, busily hitting rocks with their pickaxes, and (unfortunately) even dying and leaving a tiny little graves behind. (It wasn’t entirely my fault, I briefly ran out of beet soup.)

Zoom out a bit more to the top-down view and you can slide right off the edge of the village and look down Onbu’s massive head as it trudges along. Zoom out more and you have a great view of the gentle giant and the surrounding biome, be it an arid desert or cloud of poison spores. Go up one more level and you can see the map, showing you points of interest to send village scouts to investigate (a bit like Frostpunk’s exploration mode) and branching paths you can choose (if you’ve built a horn, and if Onbu is in the mood to take directions). This game knows how to zoom. I love the blend of 2D and 3D art and animation, too. It’s lovely. 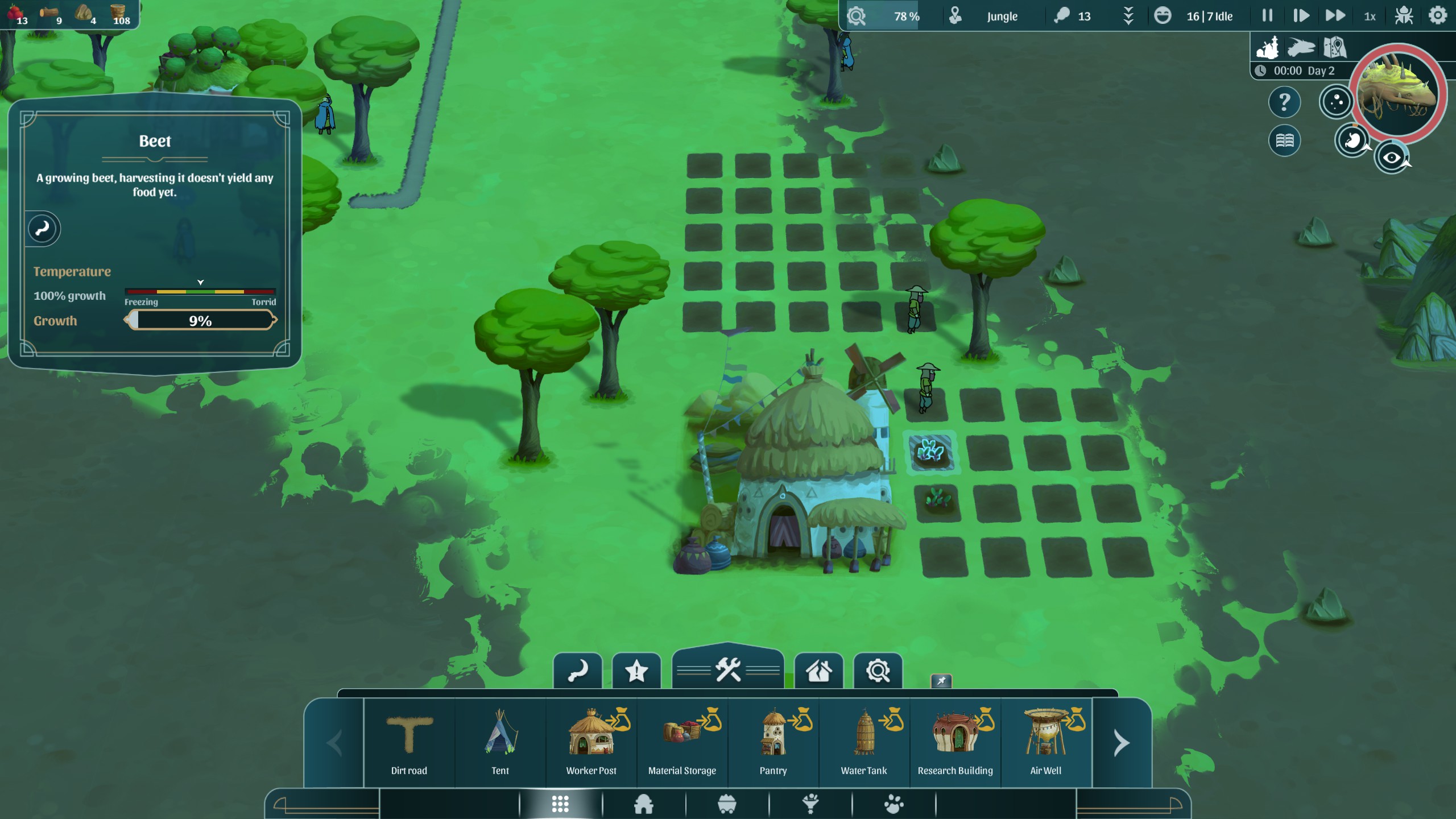 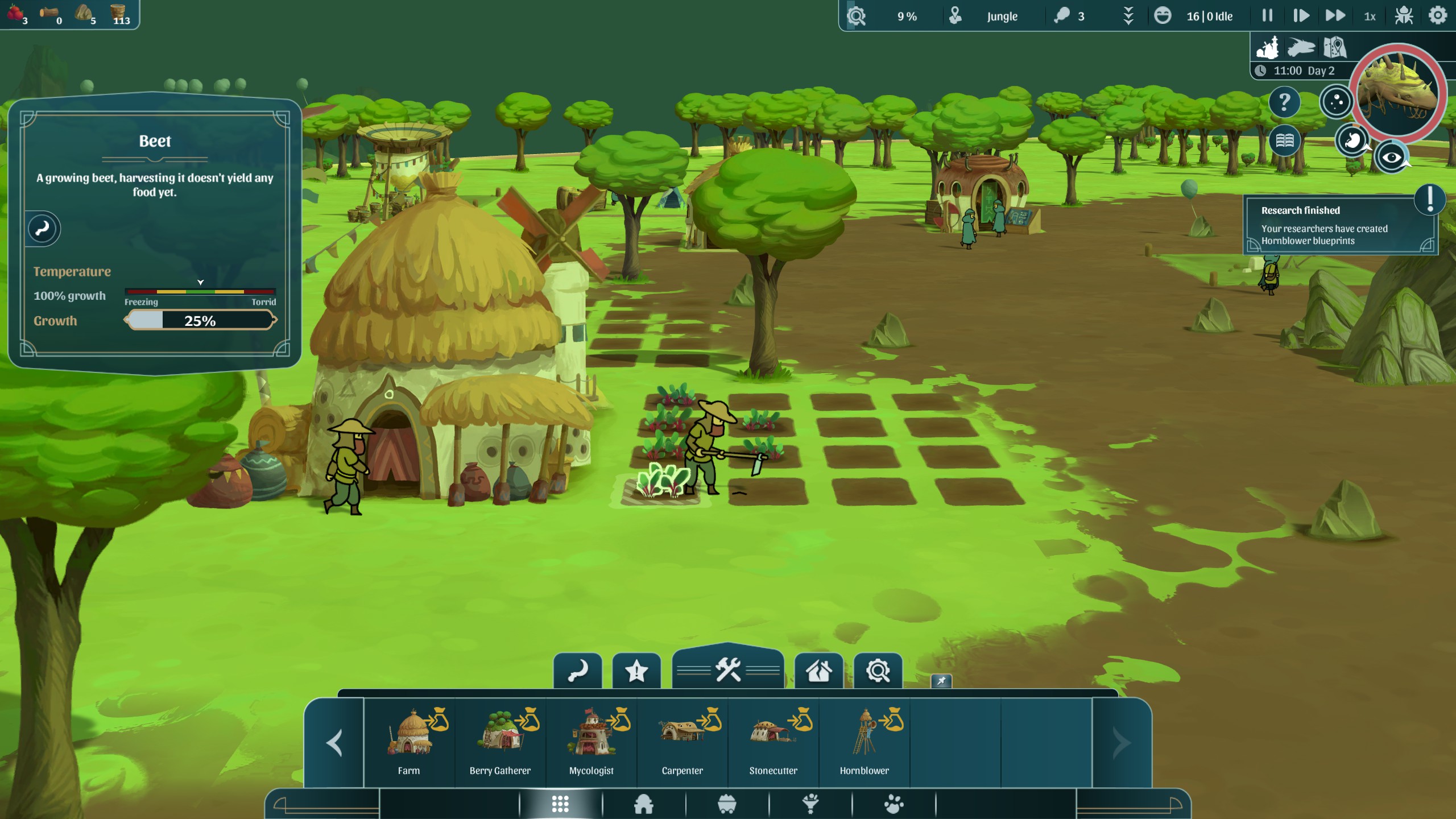 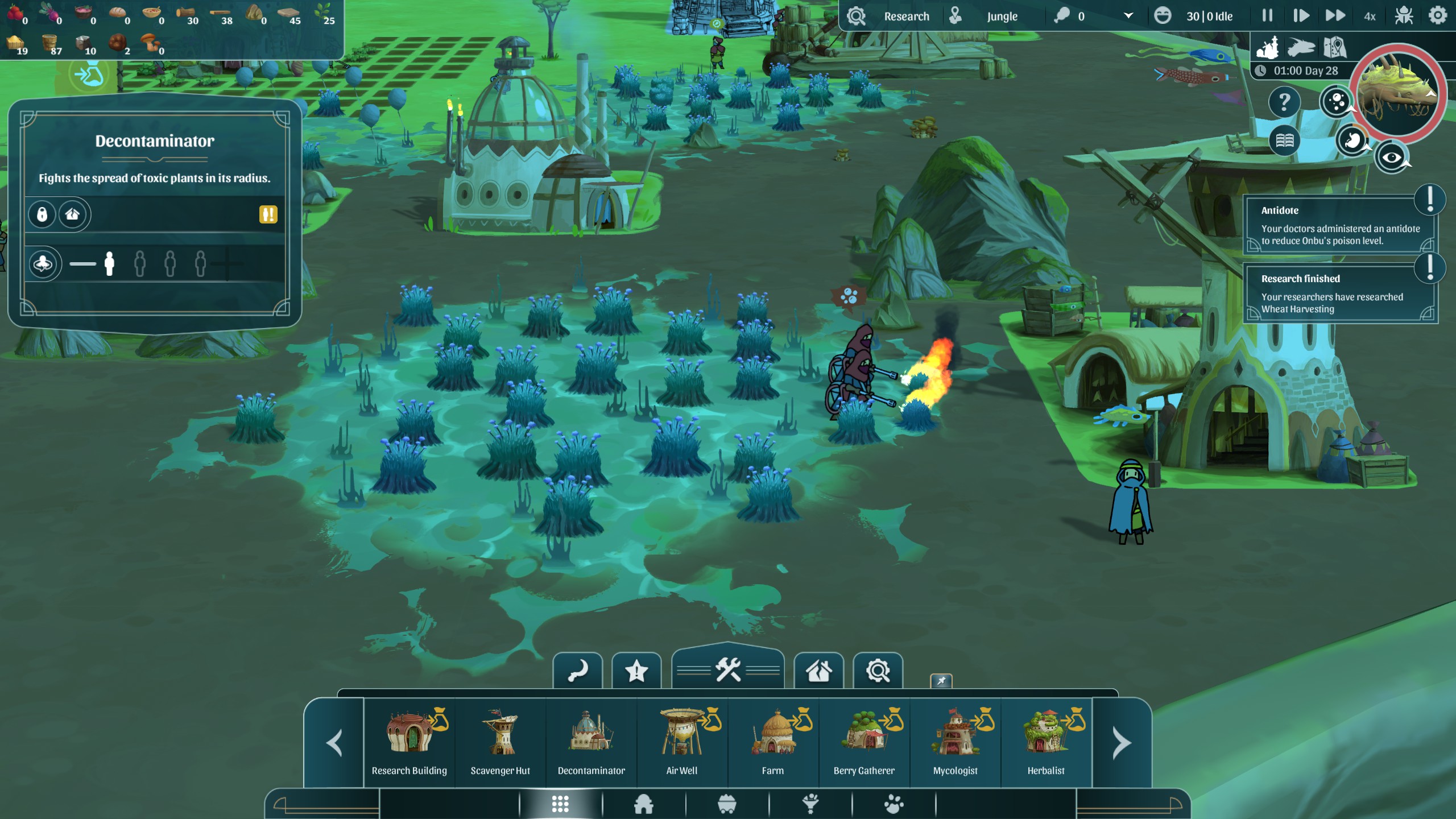 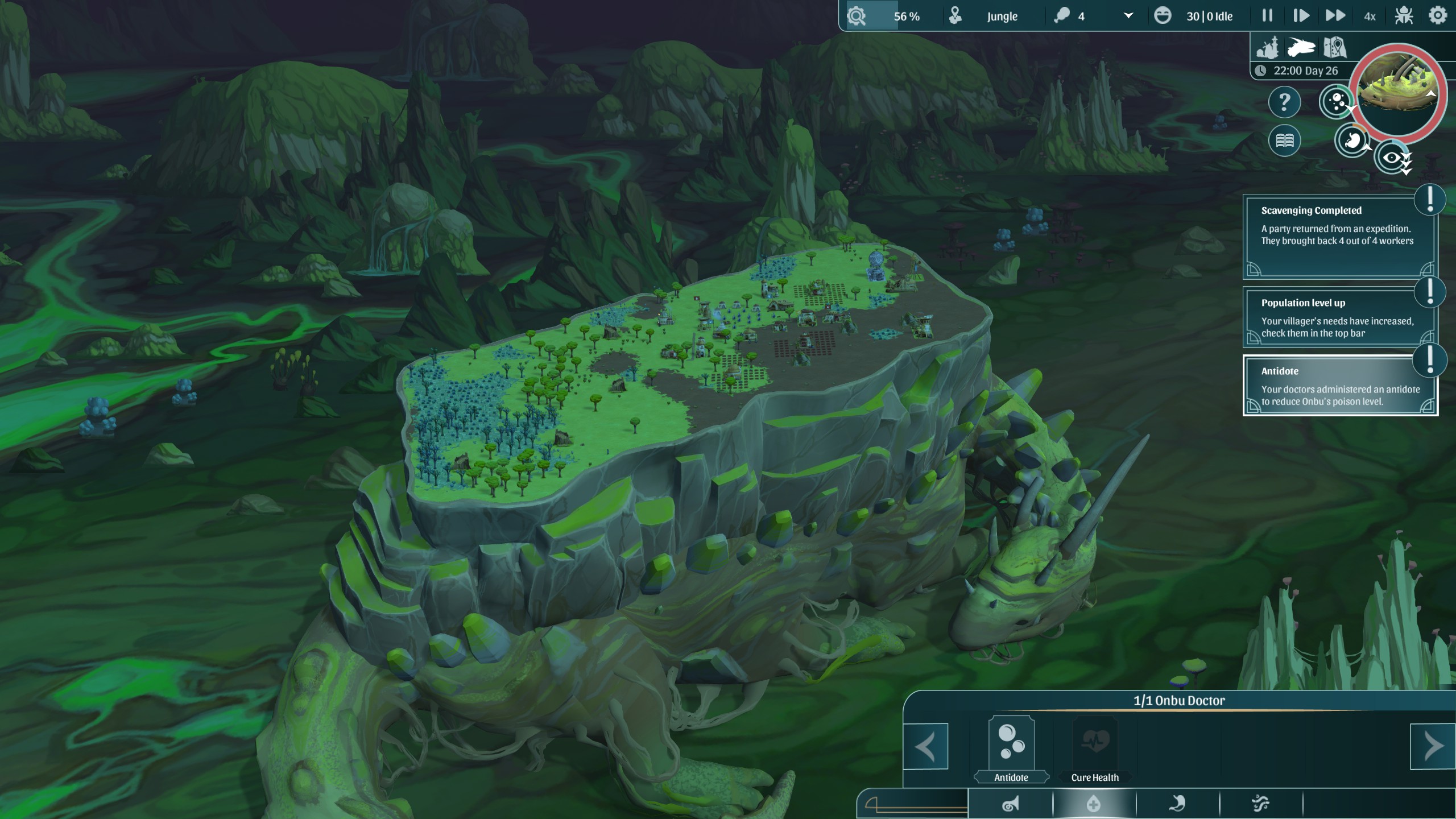 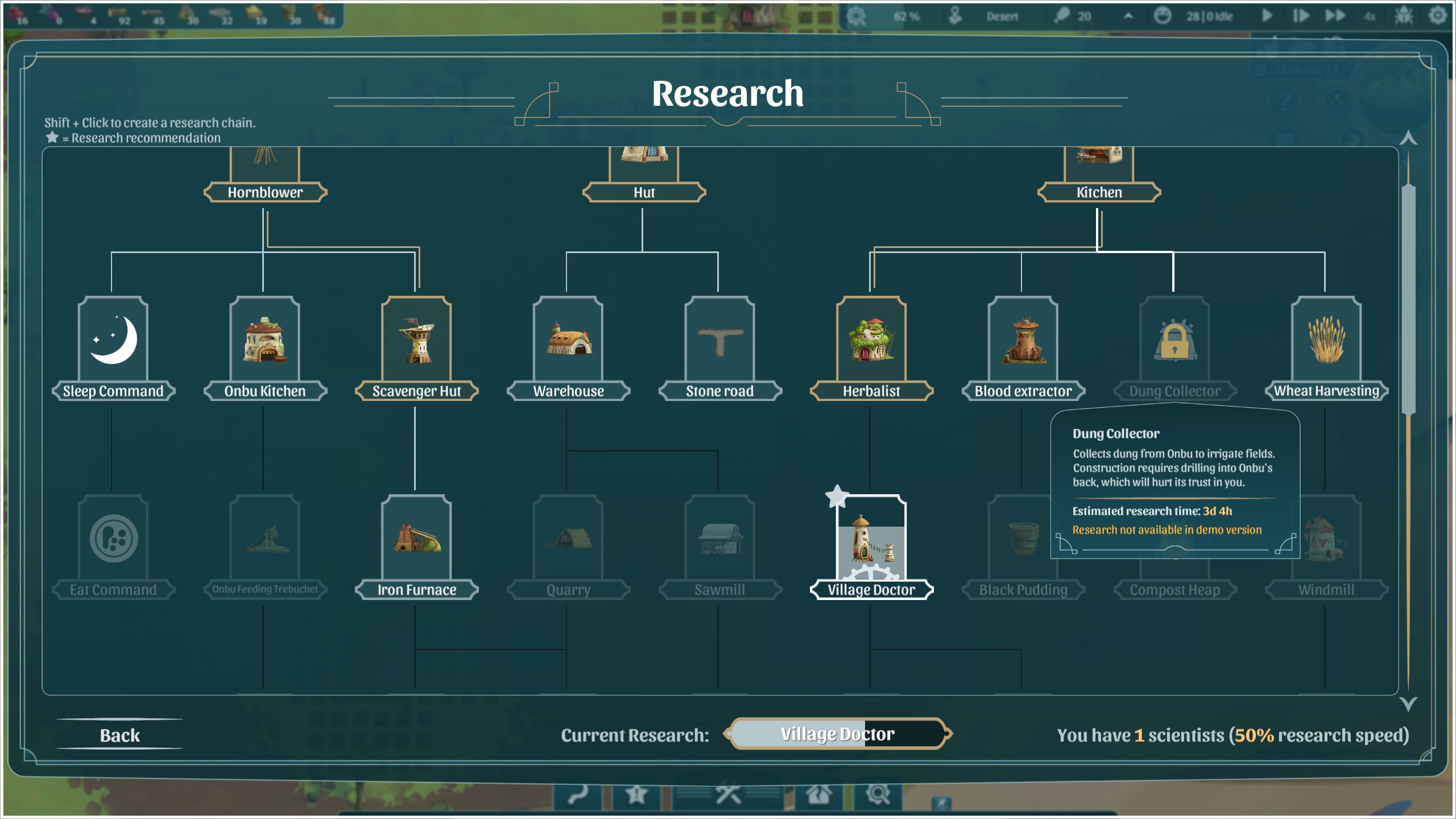 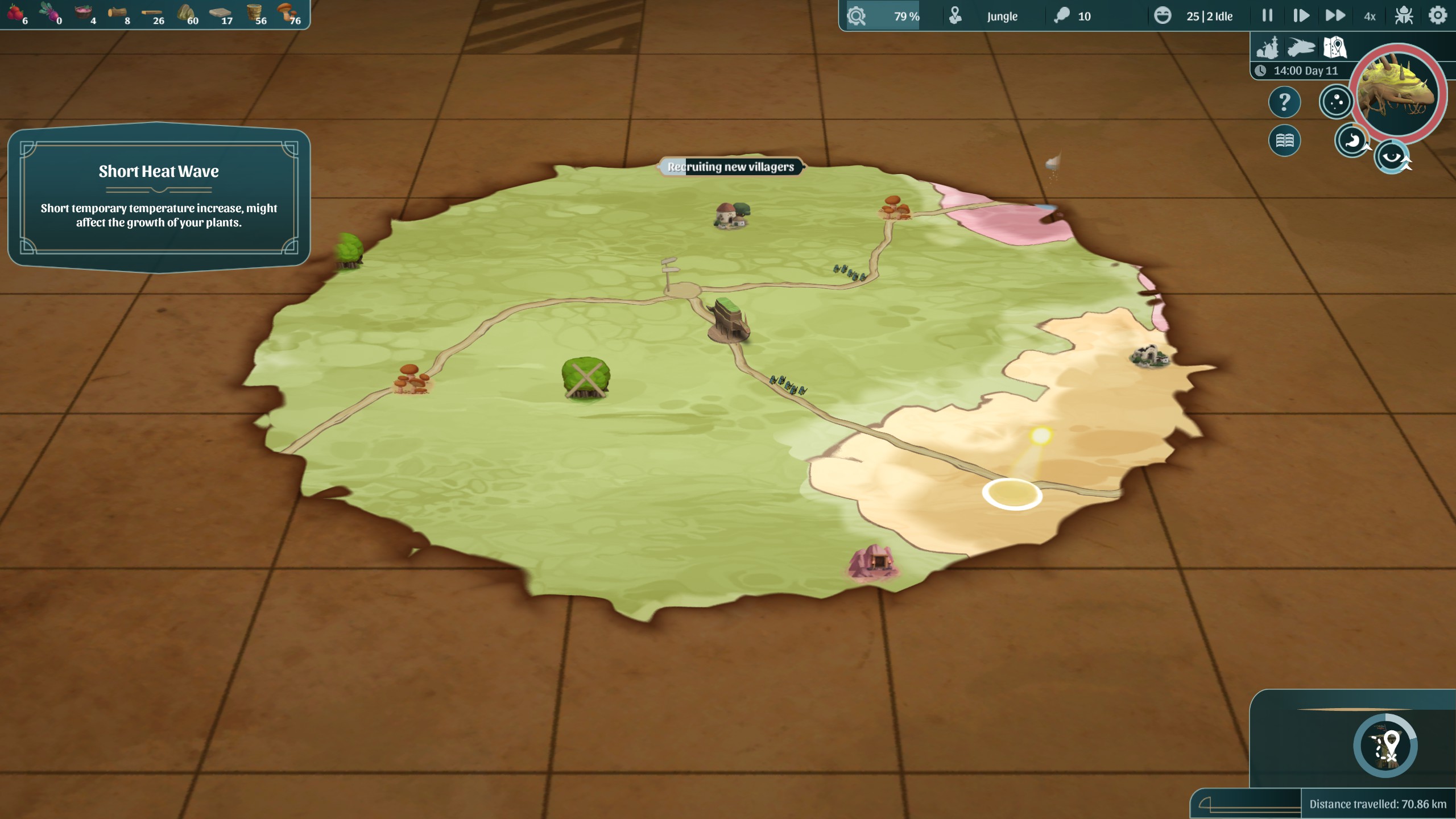 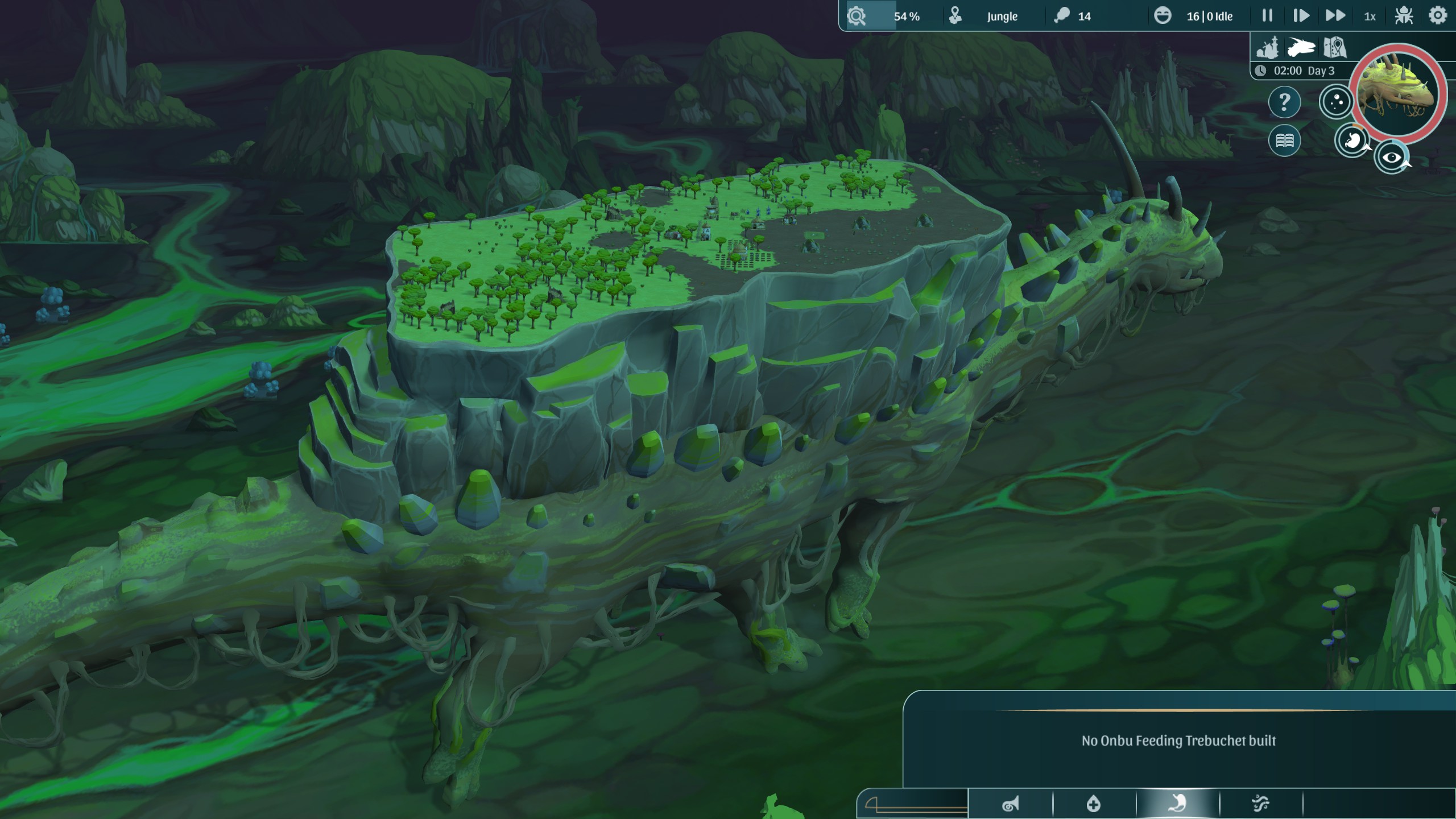 Not so lovely: Those toxic spores Onbu occasionally walks through turn out to be a major problem for me in the demo. Those spores land and begin reproducing. And you can’t just ignore them, even if they only appear in a tiny corner of Onbu’s back, far away from the village, like they did for me. They spread shockingly fast, eventually covering nearly half of Onbu’s back, and soon the spores were infecting many of my villagers. I quickly researched and built a decontamination station (citizens who work there will burn the fungus with little flamethrowers) but it was far too late. Soon nearly all my villagers had succumbed to illness. I reached the end of the demo before everyone perished, but it wasn’t looking hopeful. At least Onbu was still doing OK, mostly because I’d built it a hot air balloon filled with doctors but hadn’t shown the same courtesy to my actual villagers.

I had a really great time playing The Wandering Village demo, and it won’t be long before you can try it too. The demo will be available during Steam Next Fest starting on February 21. There’s also a closed beta you can sign up for here.