I can’t stop making alts in Star Wars: The Old Republic – Legacy of the Sith

Here we go again. Like The Meaning of Life’s Mr Creosote, fit to burst but still hungry for that wafer thin mint, I have found myself once more creating too many alts in Star Wars: The Old Republic. But this time it’s not a lack of self-restraint, I swear. I mean, it is that a little bit, but SWTOR’s new expansion, Legacy of the Sith, is also to blame, making the allure of a new character impossible to resist.

See, as well as bumping up the level cap to 80 and continuing the story that started in Onslaught, Legacy of the Sith also completely overhauls the class system, and the relationship between class and story. It is, pardon my Huttese, abso-fucking-lutely brilliant.

Before diving into this, it’s worth noting that Legacy of the Sith has gone down like the Holiday Special. It’s a short update, story-wise, introduces hideous UI changes, reduces how many new abilities you can grab as you level up and has plenty of bugs. A lot of players ain’t too impressed. And yeah, it’s pretty disappointing overall. But this is one place where I feel like it’s been a success.

When jumping into character creation, you now start by picking your origin, which determines your story and how NPCs perceive you. These origins used to be the base classes: Agent, Inquisitor, Smuggler and so on. Then it’s onto combat styles—what were originally advanced classes. So you can create a character who is thematically an Agent, but they use all of the abilities and gear of a Mercenary, like jetpacks and missiles. Force users can’t select a Tech combat style, and vice versa, but otherwise you’re free to mix and match.

This is great if you want to experience, say, the Jedi Consular storyline, but don’t enjoy playing a Sage or a Shadow. It also means you can recreate some of the more nuanced or unusual Star Wars characters that the old system couldn’t support. One of the examples BioWare gave when it was first touting the changes was Clone Wars’ Rex, who’s one of the first characters that springs to mind when I think of a Republic soldier. But he uses two blasters, which Republic Troopers cannot. Now, though, you can pick the Trooper origin with the Gunslinger combat style, formerly a Smuggler advanced class, and live that dual blaster life.

It’s a huge boon for roleplaying, too, and finally lets you reenact the classic fall from Jedi to Sith. Before, you could sort of do this by making lots of dark side choices for your Jedi and chucking a red crystal into their lightsaber, but mechanically they’d never be Sith. That’s no longer the case. At character creation, you have to stay in your lane, Republic and Jedi on one side, Empire and Sith on the other, but by acting like a dick you’ll eventually be given the choice to take a Sith combat style, throwing out lightning and choking ineffective underlings. 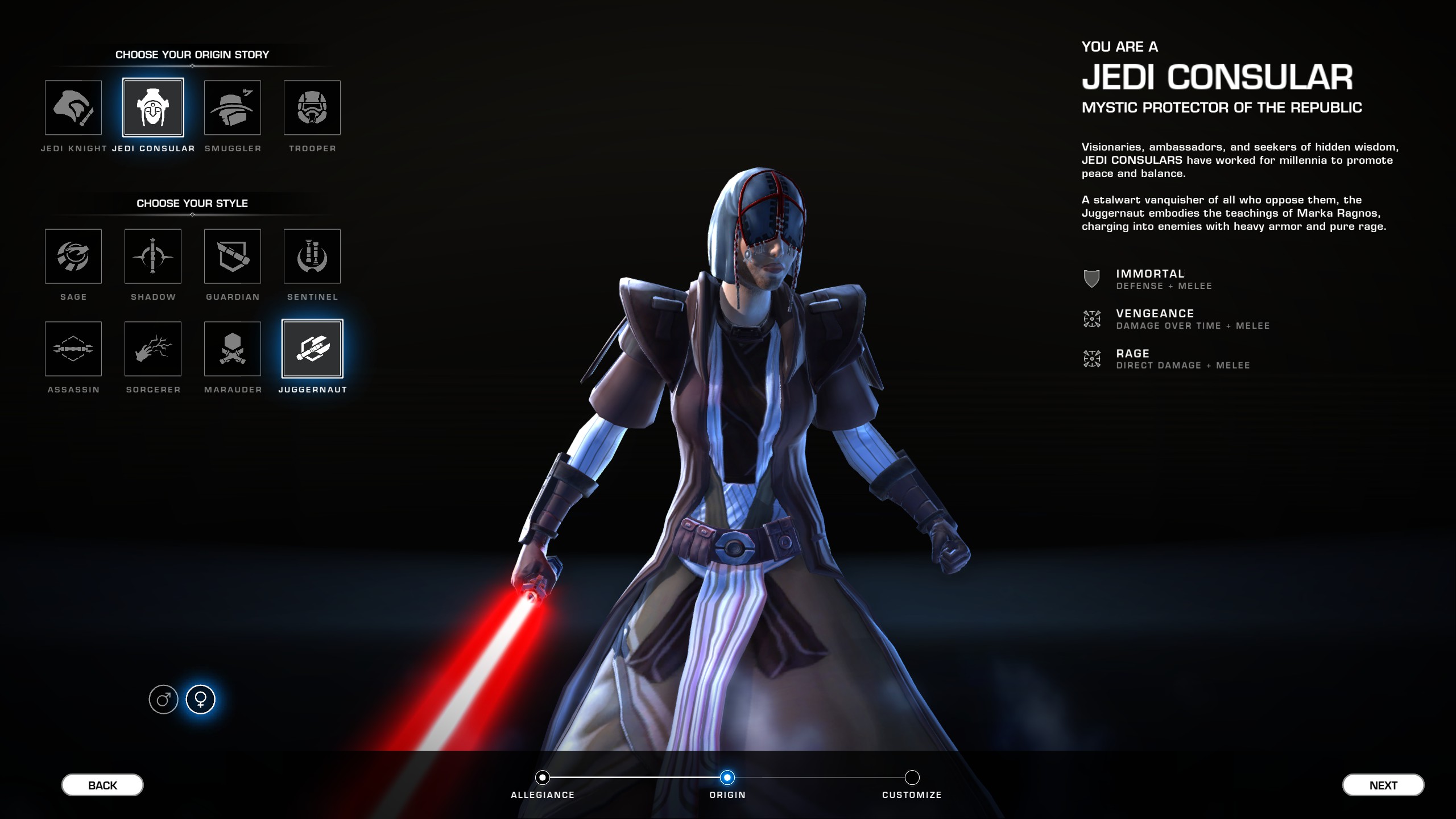 That’s why I decided to make a Consular, and why I was surprised to find I could make her a Sorcerer straight away. After a bit of digging around I found out why: I’d reached Dark V, the highest tier of being a dickhead, with a bunch of other characters, and doing so just once lets you use the opposite faction’s combat styles. So of course I made her an evil wizard straight away, but while I revelled in frying flesh raiders with lightning instead of just pelting them with wee rocks—Jedi have no style—I do wish I’d earned it through my actions.

Don’t get me wrong: it’s great that I can skip this step if I want to, but I shouldn’t have been so eager to sidestep the journey. Sure, I can still progress down the dark side, and the story isn’t going to be affected, but I’ve already snatched the reward. Oh well! Lesson learned. And it’s not like she’s going to be my last alt. In fact, I’ve already made another. And one after that. I’m well beyond saving at this point.

It’s appropriate that an expansion called Legacy of the Sith has liberated us from the constraints of the old class system. They’re all about breaking their chains. Well, perhaps they’re more about putting other people in chains. But let’s not quibble over semantics. It doesn’t make SWTOR feel new again, but this flexibility, this freedom, it does make jumping back into the eternal conflict between Sith and Jedi exciting again. Especially with the addition of secondary combat styles. 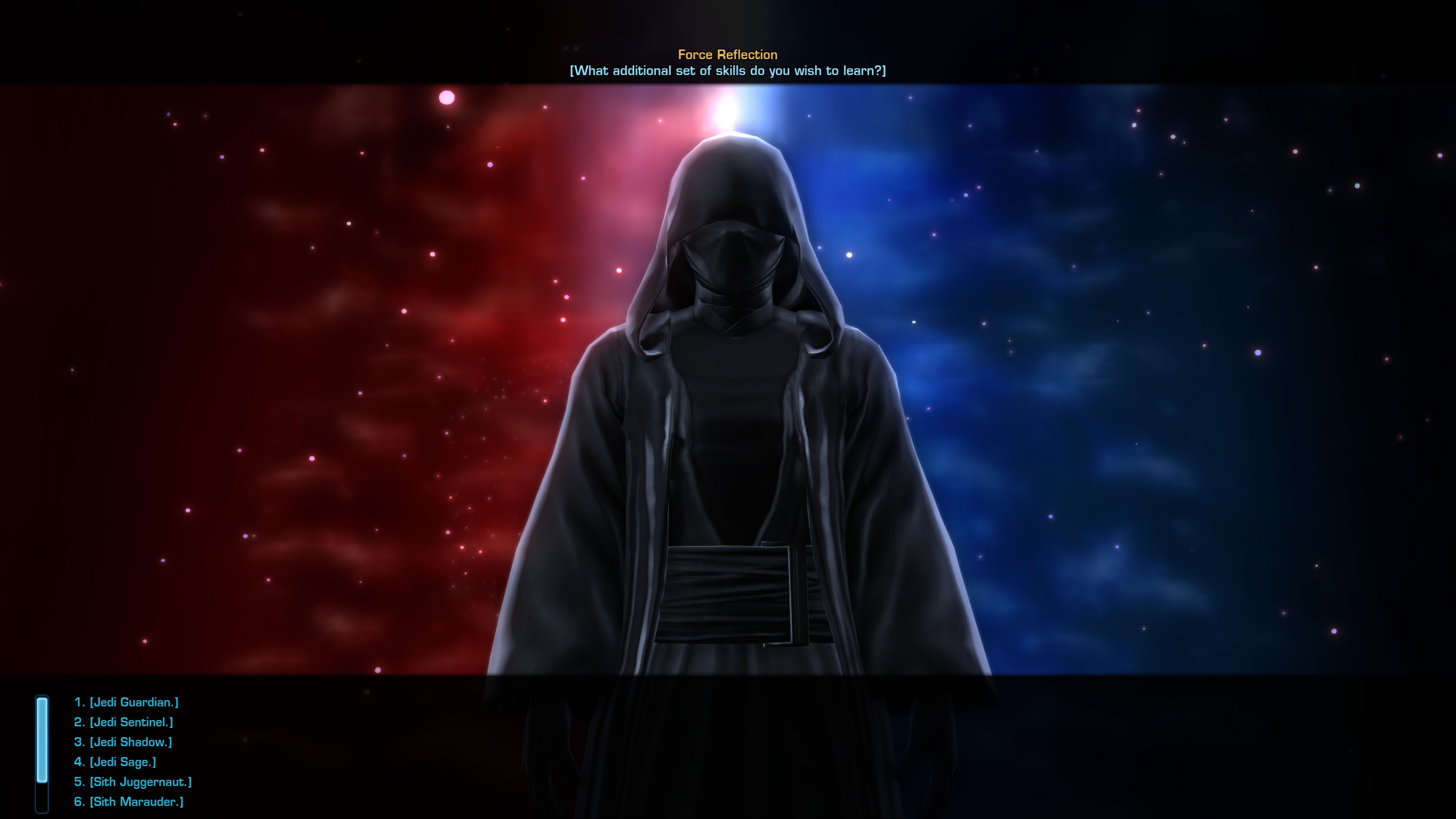 I must have skipped over or just forgotten all about being able to pick an extra combat style, so getting a quest inviting me to test them out and learn a whole new set of skills was a pleasant surprise. So now my new evil Jedi Sorcerer is also a tanky Juggernaut, because why the hell not? Then I went through my whole roster and started picking extra styles for everyone, agonising over what was the best fit, and what I wanted out of them. I was at it for a while. The choice is permanent, unfortunately, so I wasn’t going to rush.

God, it’s awesome. To be clear, these combat styles are separate—you can’t use skills from both at the same time. That would be extremely fun, but bloody hell, what a balance nightmare it would be. You have to create loadouts, and switch between them. This can only be done in sanctuaries and cantinas, but for 200,000 credits you can unlock a legacy perk that lets you switch loadouts wherever you are. It’s a bargain, honestly.

So much of the game is already designed for solo players that you never need to consider what style you’re using depending on the task at hand, but in group activities the ability to change loadout and fill a completely different role is going to be very handy. And sometimes it’s just nice to mix things up a bit. After a few hours of wading into crowds and soaking up all the damage, maybe you just want to hang back and throw some rocks or heal your companion. 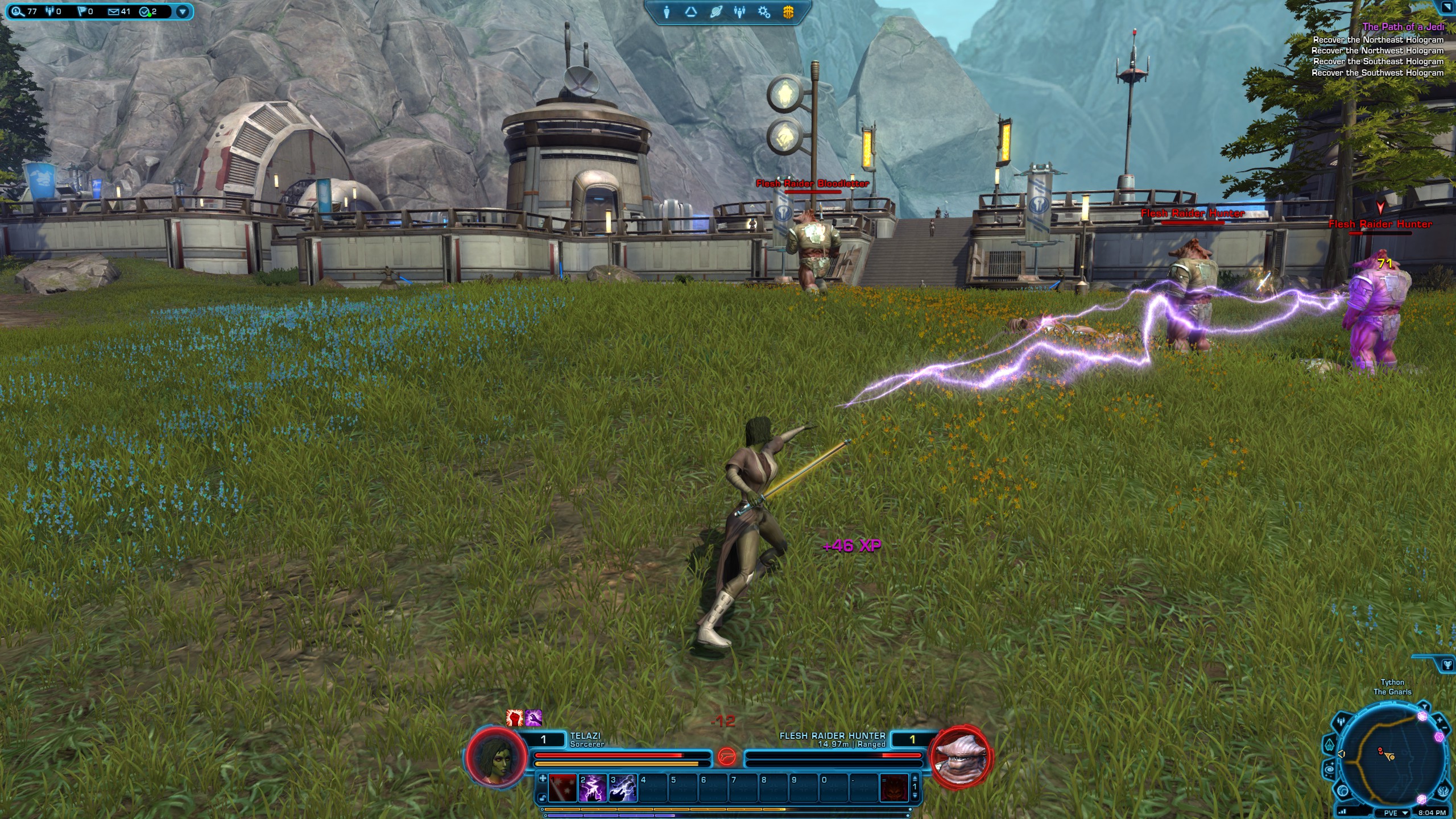 You can set outfits for different loadouts, too, so I’ve been trying to match the clothes to the abilities. It’s got to be just right. Distinct, but not so much that it looks like a completely different character would wear it. There’s gotta be some consistency. With some characters it’s down to colour. With others I make sure there’s always a cape. This is important stuff. SWTOR is as much about dressing up your spacefaring heroes and villains as it is about quests and wars, and I’ve got a couple of characters where that’s basically all I do.

It’s a shame, then, that a couple of great systems, including one that I’ve been hoping would appear for years and years, have been overshadowed by bugs, unwelcome changes and the largely negative response to the expansion. But I know what’ll cheer me up. Yep, just one more alt. As a treat.