GeForce NOW’s RTX 3080 membership is the next generation of cloud gaming. This GFN Thursday looks at one of the tier’s major benefits: ultra-low-latency streaming from the cloud.

This week also brings a new app update that lets members log in via Discord, a members-only World of Warships reward and eight titles joining the GeForce NOW library.

The GeForce NOW RTX 3080 membership tier is kind of like magic. When members play on underpowered PCs, Macs, Chromebooks, SHIELD TVs, Android devices, iPhones and iPads, they’re streaming the full PC games that they own with all of the benefits of GeForce RTX 3080 GPUs — like ultra-low latency.

A few milliseconds of latency — the time it takes from a keystroke or mouse click to seeing the result on screen — can be the difference between a round-winning moment and a disappointing delay in the game.

That means whether you’re hitting your shots in Rainbow Six Siege, using a game-changing ability in Apex Legends or even sweating out a fast-paced shooter like Counter-Strike: Global Offensive, it’s all streaming in real time on GeForce NOW.

But don’t just take our word for it. We asked a few cloud gaming experts to put the GeForce NOW RTX 3080 membership to the test. Cloud Gaming Xtreme looked at how close RTX 3080 click-to-pixel latency is to their local PC, while GameTechPlanet called it “the one to beat when it comes to cloud gaming, for picture quality, graphics, and input latency.”

And Virtual Cloud noted the latency results “really shocked me just how good it felt,” and that “when swapping from my local PC to play on GeForce NOW, I really couldn’t tell a difference at all.”

Live in the Future

On top of this, the membership comes with the longest gaming session length for GeForce NOW — clocking in at eight glorious hours. It also enables full control to customize in-game graphics settings and RTX ON, rendering environments in cinematic quality for supported games. Explore Night City with RTX ON, all streaming from the cloud with RTX 3080-class performance.

That means RTX 3080 members can experience titles like Cyberpunk 2077 with maximized, uninterrupted playtime at beautiful, immersive cinematic quality. Gamers can also enjoy the title’s new update – Patch 1.5 – released earlier this week, adding ray-traced shadows from local lights and introducing a variety of improvements and quality of life chances across the board, along with fresh pieces of free additional content.

Ready to play? Start gaming today with a six-month GeForce NOW RTX 3080 membership for $99.99, with 10 percent off for Founders. Check out our membership FAQ for more information.

Dive Into the Cloud with Discord in the 2.0.38 Update

The new GeForce NOW update improves login options for gamers by supporting Discord as a convenient new account creation and login option for their NVIDIA accounts. Members can now use their Discord logins to access their GeForce NOW accounts. That’s one less password to remember.

The 2.0.38 update on GeForce NOW PC and Mac apps also supports Discord’s Rich Presence feature, which lets members easily display the game they’re currently playing in their Discord user status. The feature can be enabled or disabled through the GeForce NOW settings menu. In celebration of the second anniversary of GeForce NOW, GFN Thursdays in February are full of rewards.

Today, members can get rewards for the naval warfare battle game World of Warships. Add two new ships to your fleet this week with the Charleston or the Dreadnought, redeemable for players via the Epic Games Store based on playtime in the game.

Getting membership rewards for streaming games on the cloud is easy. Log in to your NVIDIA account and select “GEFORCE NOW” from the header, scroll down to “REWARDS” and click the “UPDATE REWARDS SETTINGS” button. Check the box in the dialogue window that shows up to start receiving special offers and in-game goodies.

Sign up for the GeForce NOW newsletter, including notifications for when rewards are available, by logging into your NVIDIA account and selecting “PREFERENCES” from the header. Check the “Gaming & Entertainment” box, and “GeForce NOW” under topic preferences, to receive the latest updates. 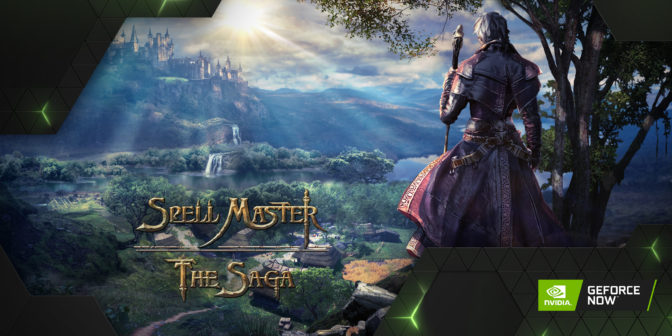 Master your magic skills to become a sorcerer and save an uncharted world from impending disaster in SpellMaster: The Saga.

GFN Thursday always brings in a new batch of games for members to play. Catch the following eight new titles ready to stream this week:

We make every effort to launch games on GeForce NOW as close to their release as possible, but, in some instances, games may not be available immediately.

Great gaming is calling. Let us know who you’re playing with on Twitter:

Us: We can’t get on @discord, we’re busy

The post Performance You Can Feel: Putting GeForce NOW RTX 3080 Membership’s Ultra-Low Latency to the Test This GFN Thursday appeared first on The Official NVIDIA Blog.