Tundra Esports made a roster change ahead of the Dota Pro Circuit (DPC) 2021-22 Tour 2, by letting go of captain Adrian “Fata” Trinks. Fata claimed that he had been kicked from the roster, sparking a mix of reactions from popular Dota 2 personalities. Former two-time The International (TI) champion Sébastien “Ceb” Debs was not shy about expressing his views about this change and said that he felt it would go down as one of the worst in competitive Dota 2 history. Several other Dota 2 personalities, including Kyle “Kyle” Freedman and Simon “Handsken” Rasmus Haag, also shared their thoughts on Fata’s removal from Tundra Esports.

“This kick will be remembered as one of the worst in DotA history,” said Ceb following the removal of Fata from Tundra Esports on Twitter.

Fata Has Been “Kicked” From Tundra Esports

Simon “Handsken” Rasmus Haag, who recently served as Alliance’s captain and was released from the team after Tour 1, also replied to Kyle’s tweet, saying “Kicking ur captain is the new meta.”

Kicking ur captain is the new meta

Former OG support player Martin “Saksa” Sazdov, who has been seeking a new team for the past few weeks is being touted as Fata’s replacement in the new team. While the new player has not yet been named by Tundra Esports, Fata has stated that the team had already found a replacement.

According to him, this new player has been in discussions to join Tundra Esports previously to replace others on the team. However, despite Fata having been against any roster changes, he was eventually “kicked” to make way for that player. 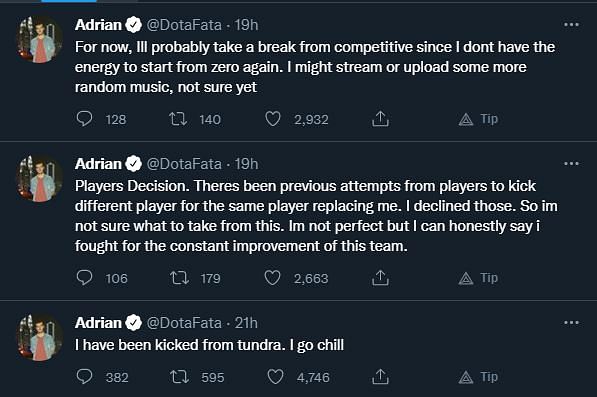 Fata on his departure from Tundra Esports

Dota 2 content creator, Kevin “Purge” Godec said it felt unpleasant watching players get kicked out, and historically, teams have not been successful after kicking captains, but the community does not know the internal dynamics within the teams. As Purge mentioned, the others were simply doing what they felt was best, and as a result, only time will tell whether or not Fata’s replacement is successful. Purge shares his thoughts on Fata’s removal from Tundra Esports

Tundra Esports’ statement on Fata’s departure mentions it was a difficult decision but it was critical to ensure that the “best possible chemistry” was maintained to improve performances.

Tundra Esports struggled in the recent Dota Pro Circuit (DPC) Western Europe (WEU) 2021-22 Regional Finals and finished in fourth place. In the past six months the team has showcased some of the best gameplay in the region. A few of its best performances were during the tiebreakers of Tour 1 where it comprehensively defeated OG, Nigma Galaxy, and Team Secret, and in the OGA Dota PIT S5 event in December 2020 where it defeated TI10 champions Team Spirit in the grand final.

The roster lock date for Tour 2 of the DPC 2021-22 is on 27th February, so Tundra Esports’ fifth and final player will be revealed shortly.