Today Square Enix hosted the 68th Final Fantasy XIV Letter From the Producer Live broadcast, focusing on the future of the game.

Producer and Director Naoki Yoshida clarified that today’s broadcast wasn’t specifically about update 6.1, which will be the next major content patch for the game. More details about that will be shared in the next livestream on March 4

Yoshida-san mentioned once more that unless the CEO of Square Enix orders him to quit (and he’d still fight against such an order) or he dies, he has no intention to leave the Final Fantasy XIV development team.

The next goal will be the next expansion, 7.0. The concept for that future is “advancement as a “solo” and “multiplayer” RPG experience.”

Another goal leading to 7.0 is the game’s first graphical update, or at least the preparation and development for it. This doesn’t necessarily mean that PS4 support will cease then. 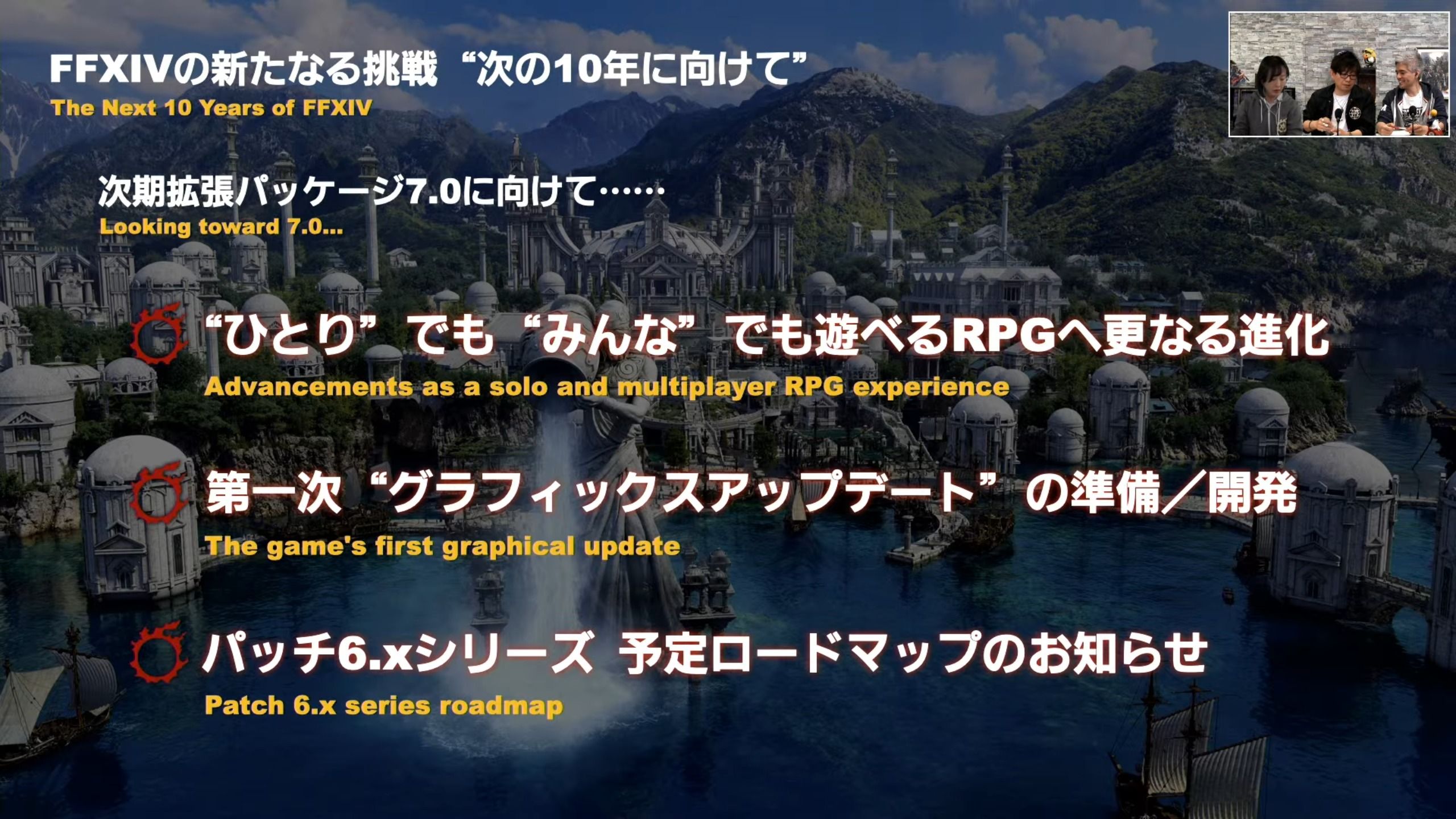 The first concept is to create “an even better RPG- alone or with friends.” While Final Fantasy XIV is categorized as an MMORPG, developers want to reach to players who have played all of the games of the series besides XI and XIV, going beyond the solo-friendly nature of recent FFXI.

There are also people who don’t want to play with others, and that’s one of the main reasons why many players hesitate to try FFXIV.

Yoshida-san wants to spend the next 10 years breaking out of the strict MMORPG formula, turning the game into an RPG that can indeed be played alone or with friends according to each player’s desires.

This includes large-scale updates to the Trust system. All main quest dungeons and 4-payer trials will get Trust compatibility between patches 6.1 and 6.5.

Specifically, patch 6.1 will make A Realm Reborn (2.0) compatible with the Trust system. Further improvements will be made to low-level main scenario dungeons and trials.

8-player trials won’t be updated for now, but it’ll be considered for update 7.0 or later. Also, the regular matching system won’t be removed. Players will still be able to play together as they do today.

Especially for low-level dungeons, the Trust party members may not be the Scions, but perhaps other members of the Adventurers Guild or other characters who have the Echo. At some key points of the story, the script may be amended to let certain NPCs join.

The team also wants to make some visual changes to areas that may have been rushed during the creation of 2.0. Those will be announced. 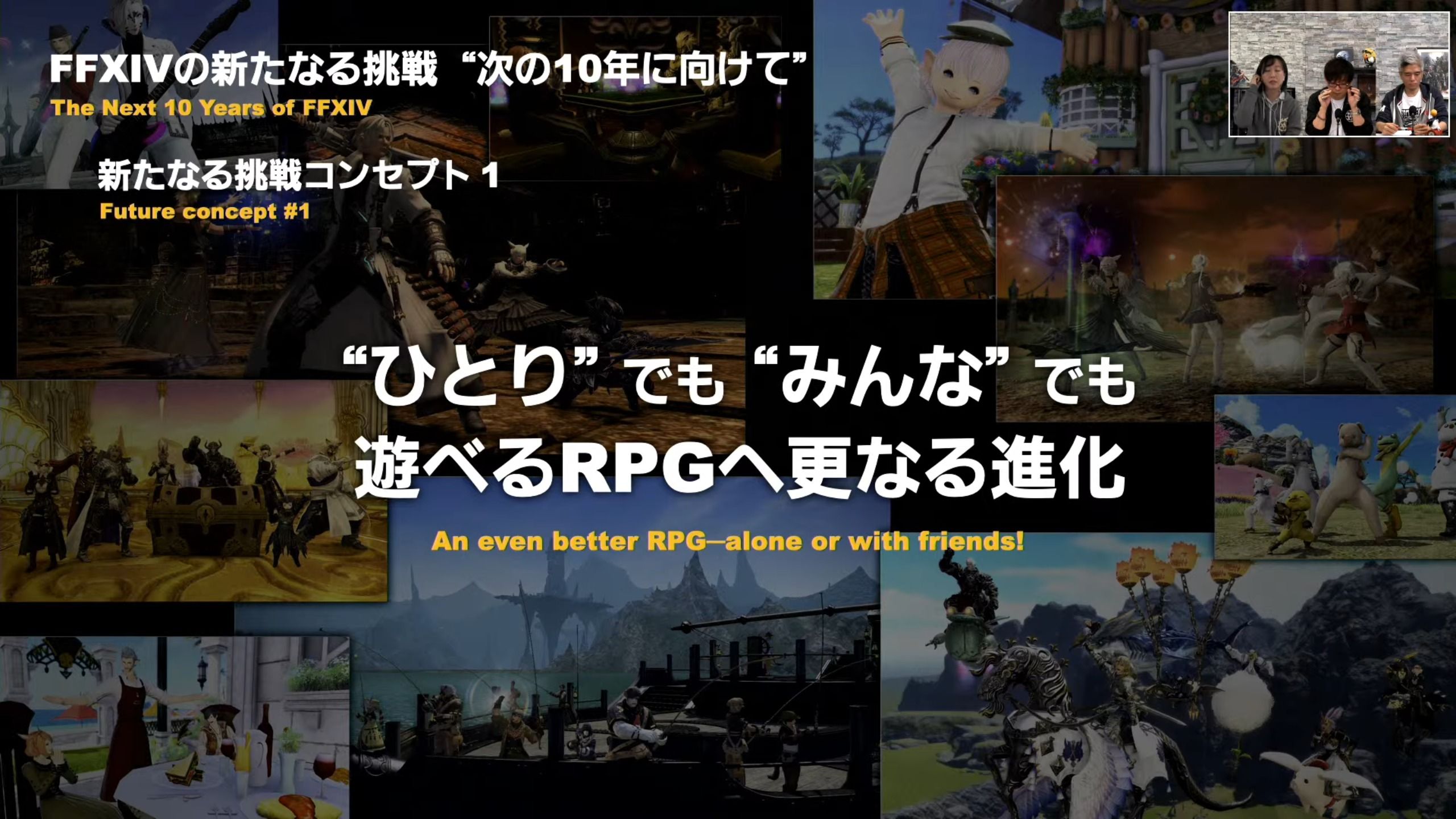 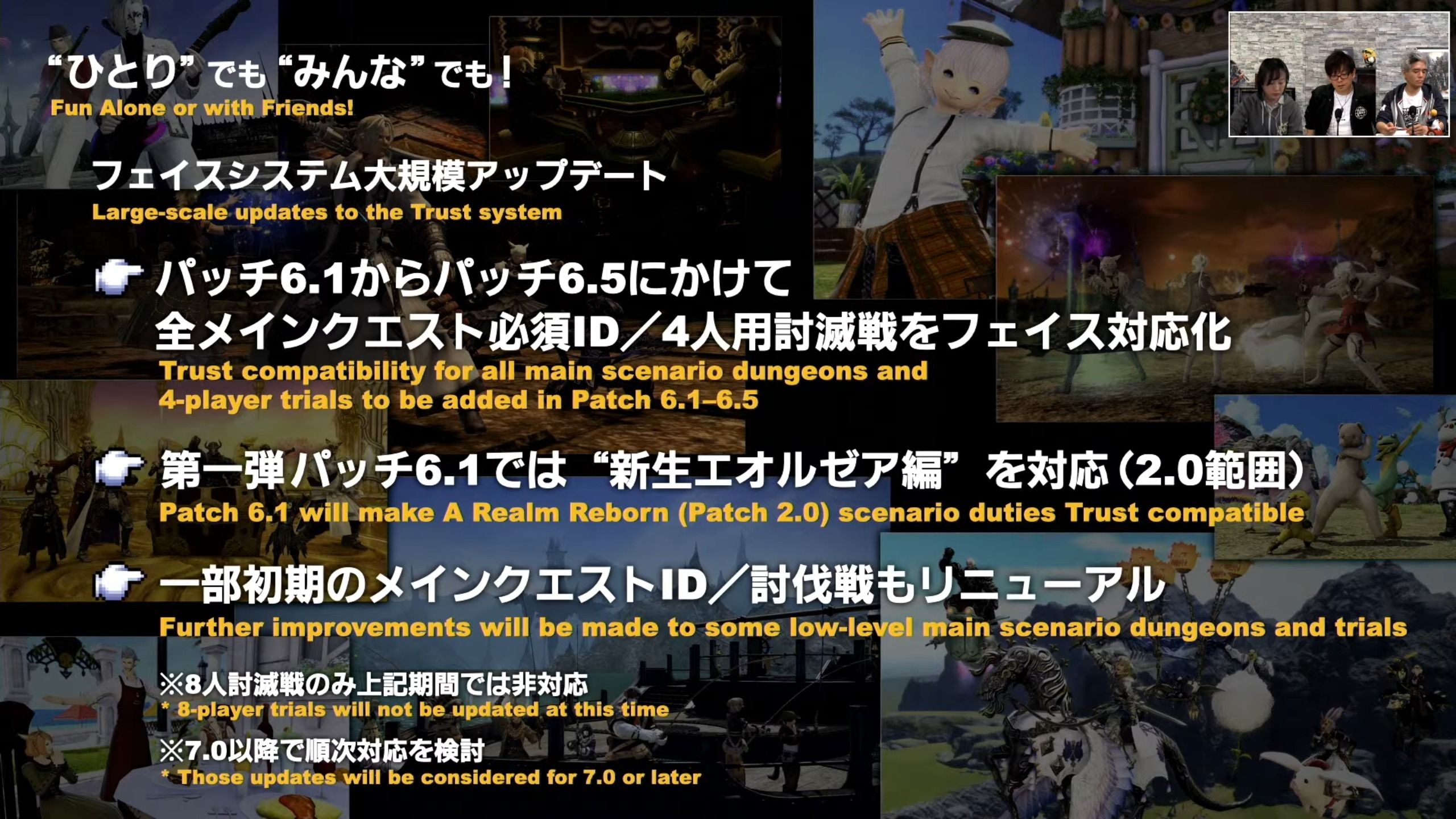 Following, Yoshida-san talked about the graphical update, this is done in preparation for long-term service since Square Enix plans to keep Final Fantasy XIV alive for at least 10 years.

The game includes an insane amount of assets, so changing everything at once would be problematic and take a long time, which is why this will be the “first” graphical update and there will likely be more afterward.

Preparations will be made until the next expansion (7.0), and the development team plans to improve the screen-wide aesthetic appeal suited for a multiplayer environment. This means that they won’t aim for the quality of single-player games like Horizon Forbidden west. Rendering 300 player characters on screen at the same time at that quality would be impossible.

Animation and lighting system updates are also planned. This means that minimum system requirements will change with 7.0, but Square Enix will still try to accommodate a range of hardware specs as broad as possible.

Likely before 7.0, the PS4 version will be optimized and configuration options will be implemented so that players can decide whether to prioritize frame rate or visual quality. The console will be supported at least until 7.0. 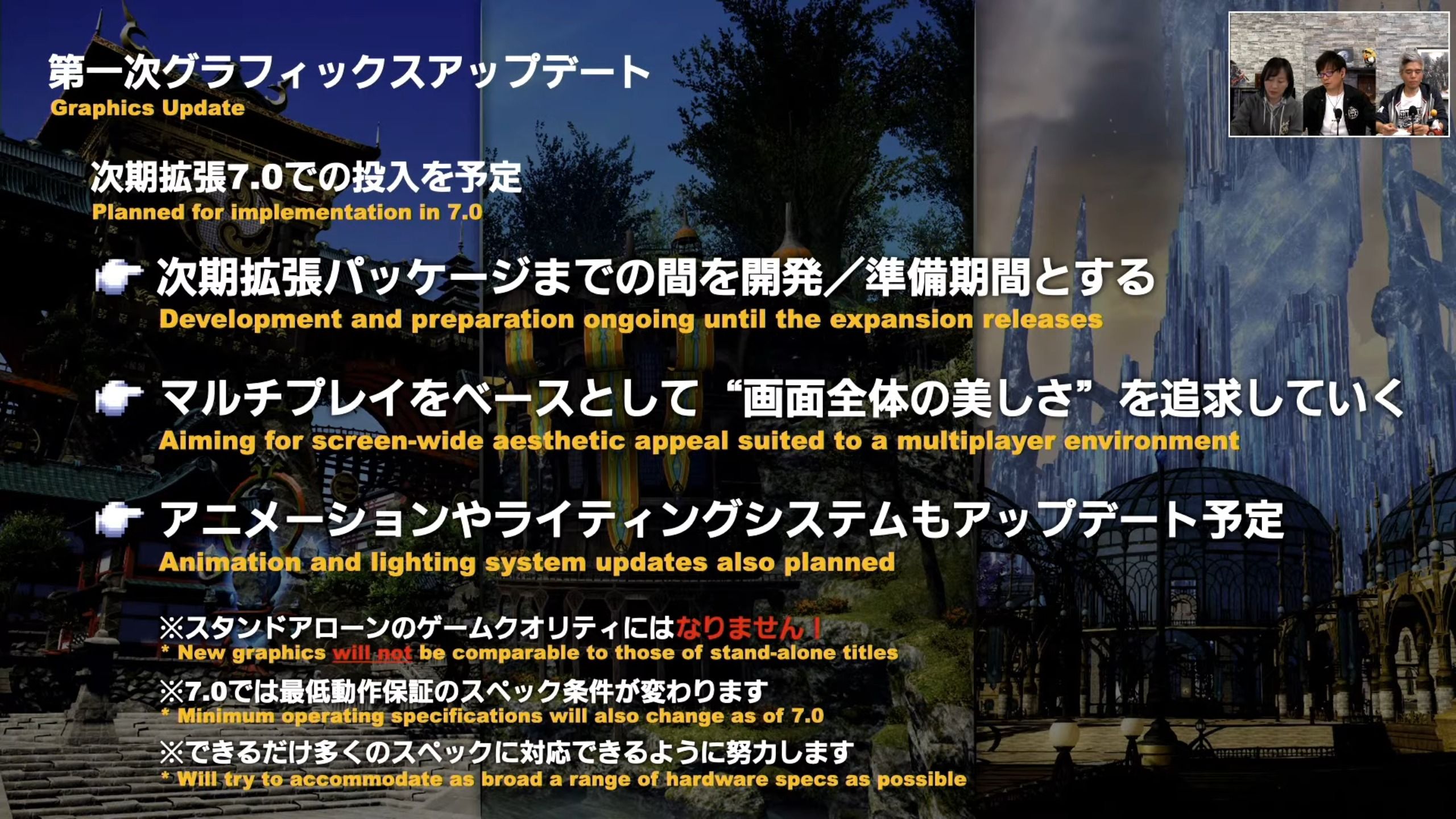 We get to see a prototype of a character was showcased and Yoshida mentioned that this is not the direction the team is aiming for. Photorealism is not the goal. 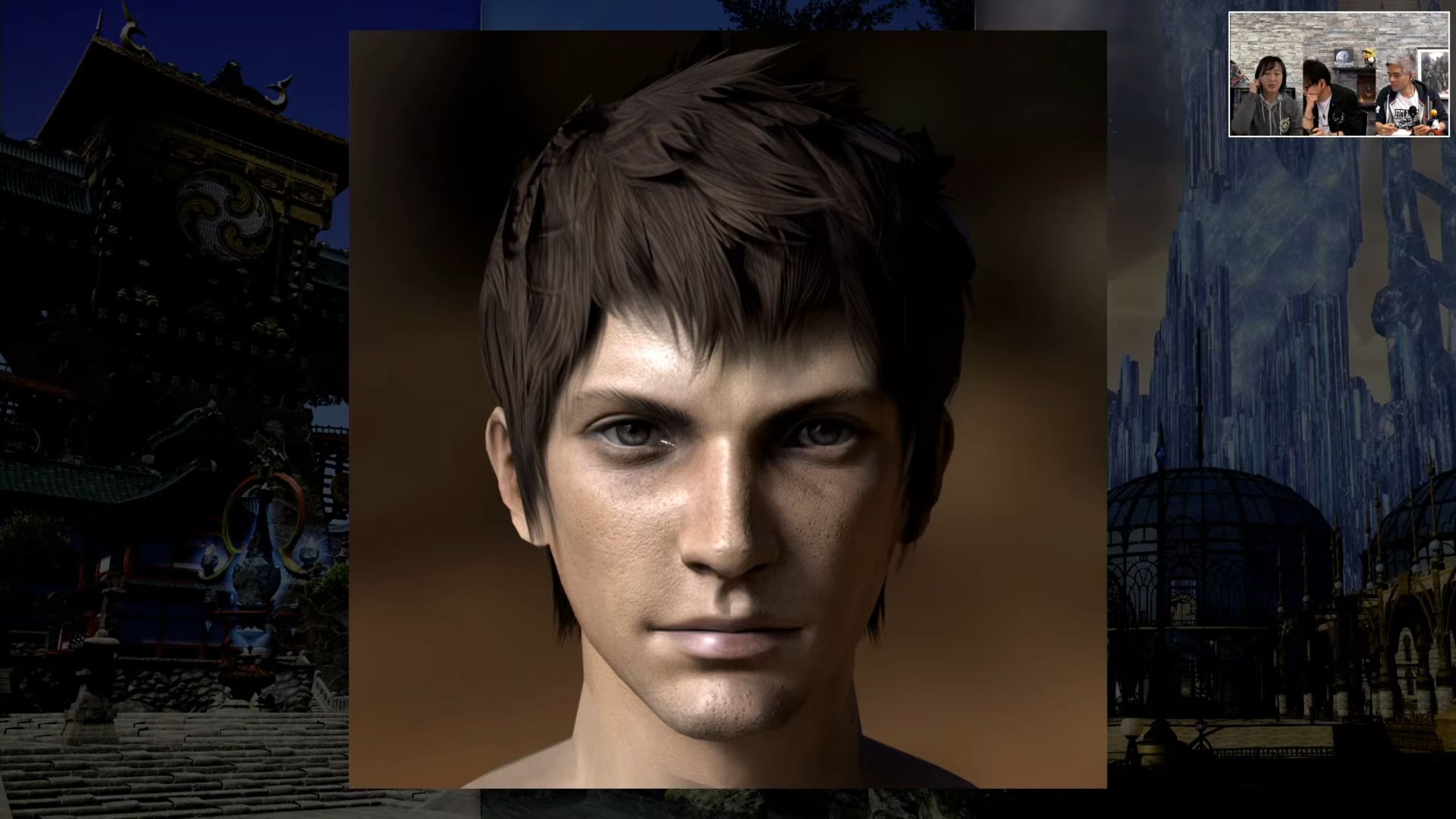 Testing has been going on for about a month and while the final result will look better, below you can see some examples.

The first compares the current playable characters with a version with high-resolution textures with additional shaders. The team is aiming to do even better, but this is what they can show for now. 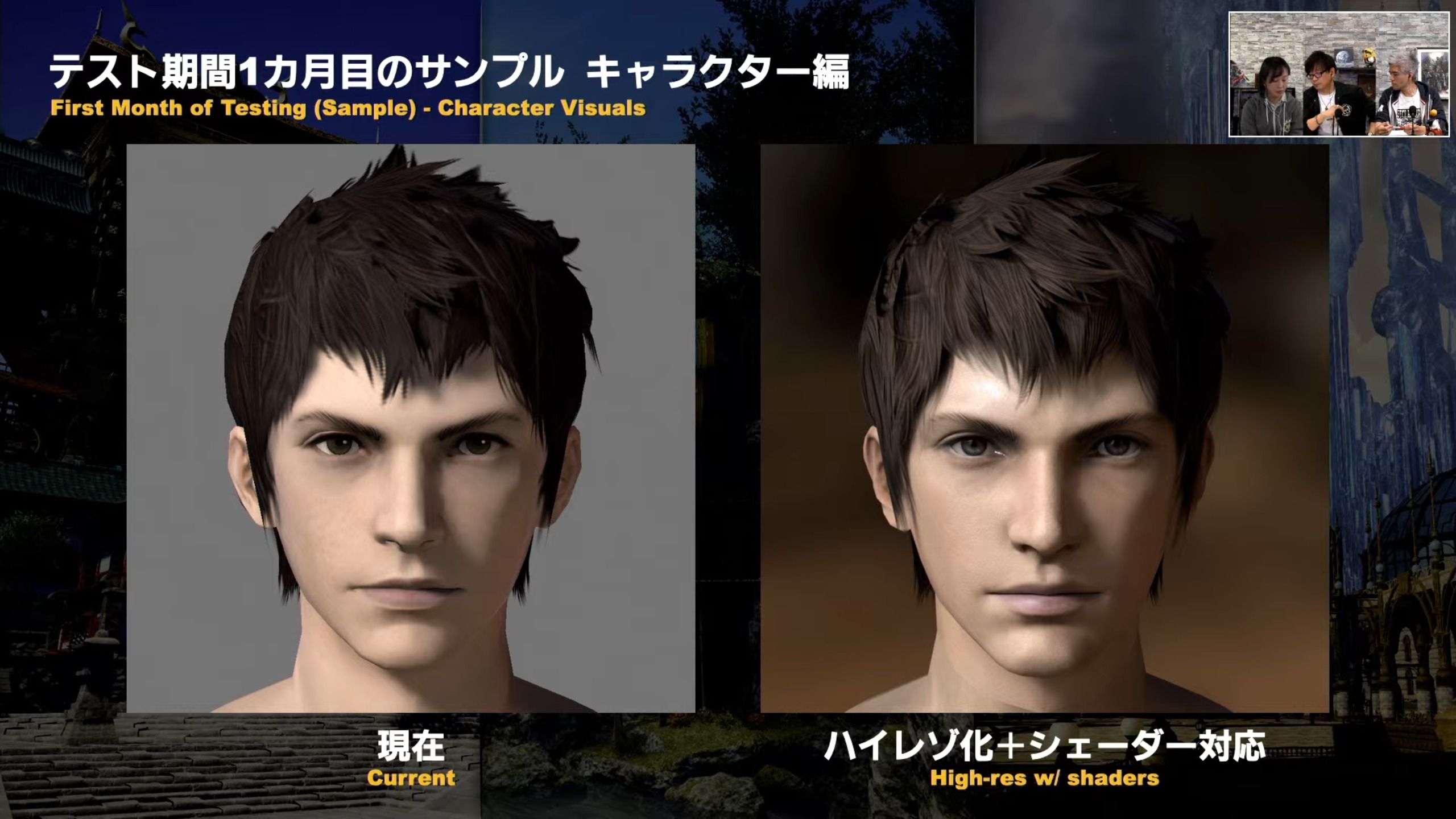 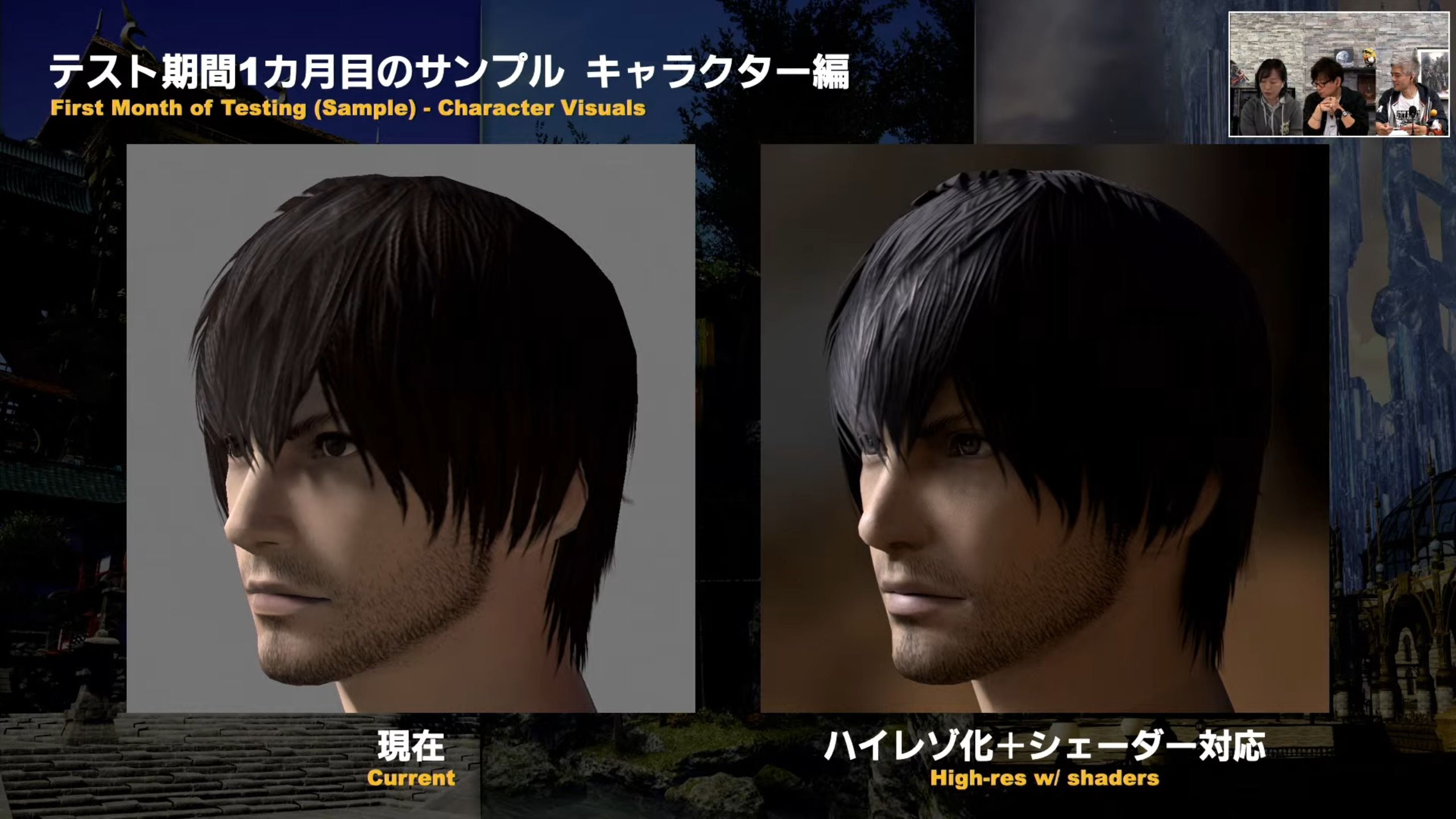 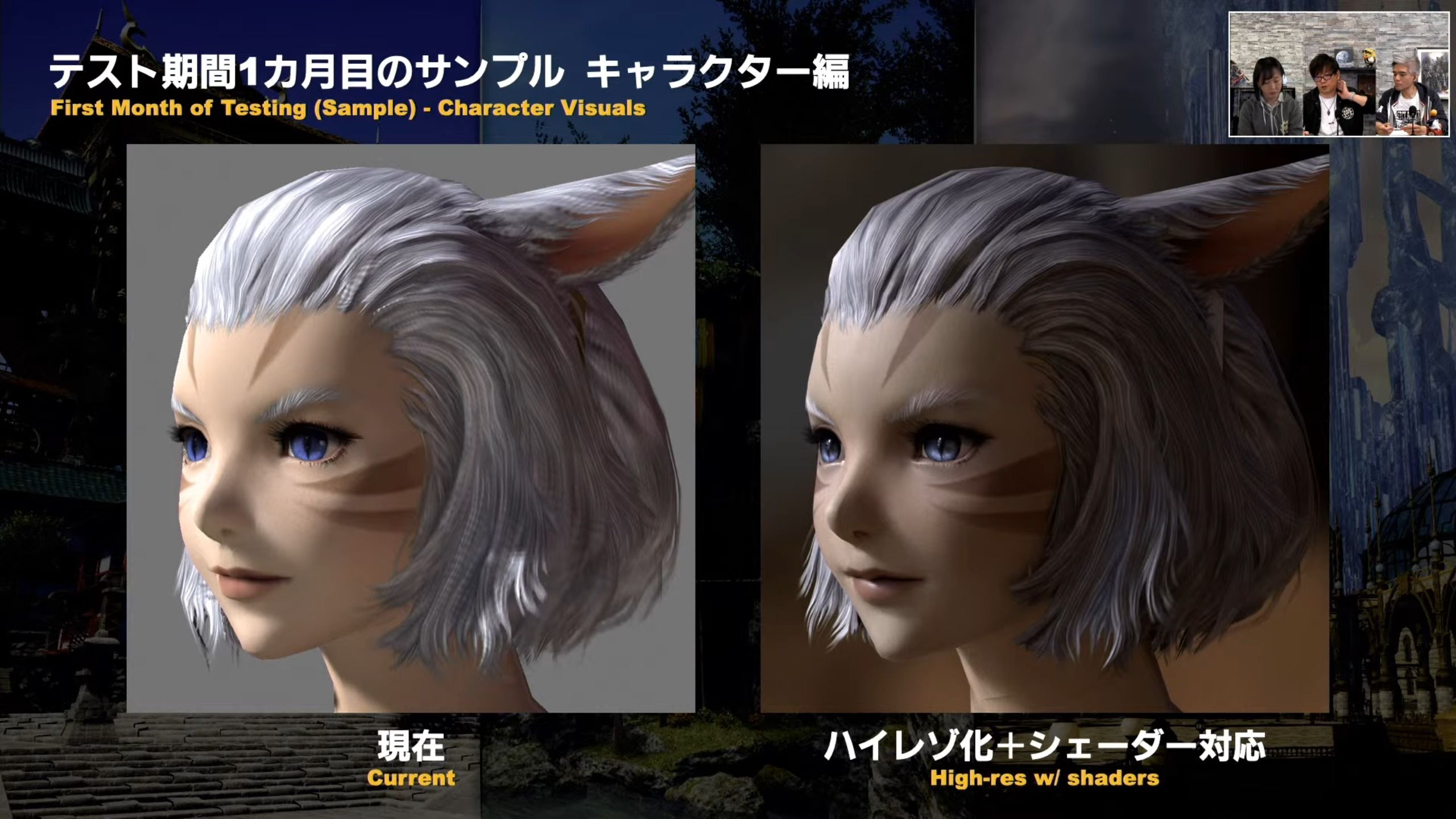 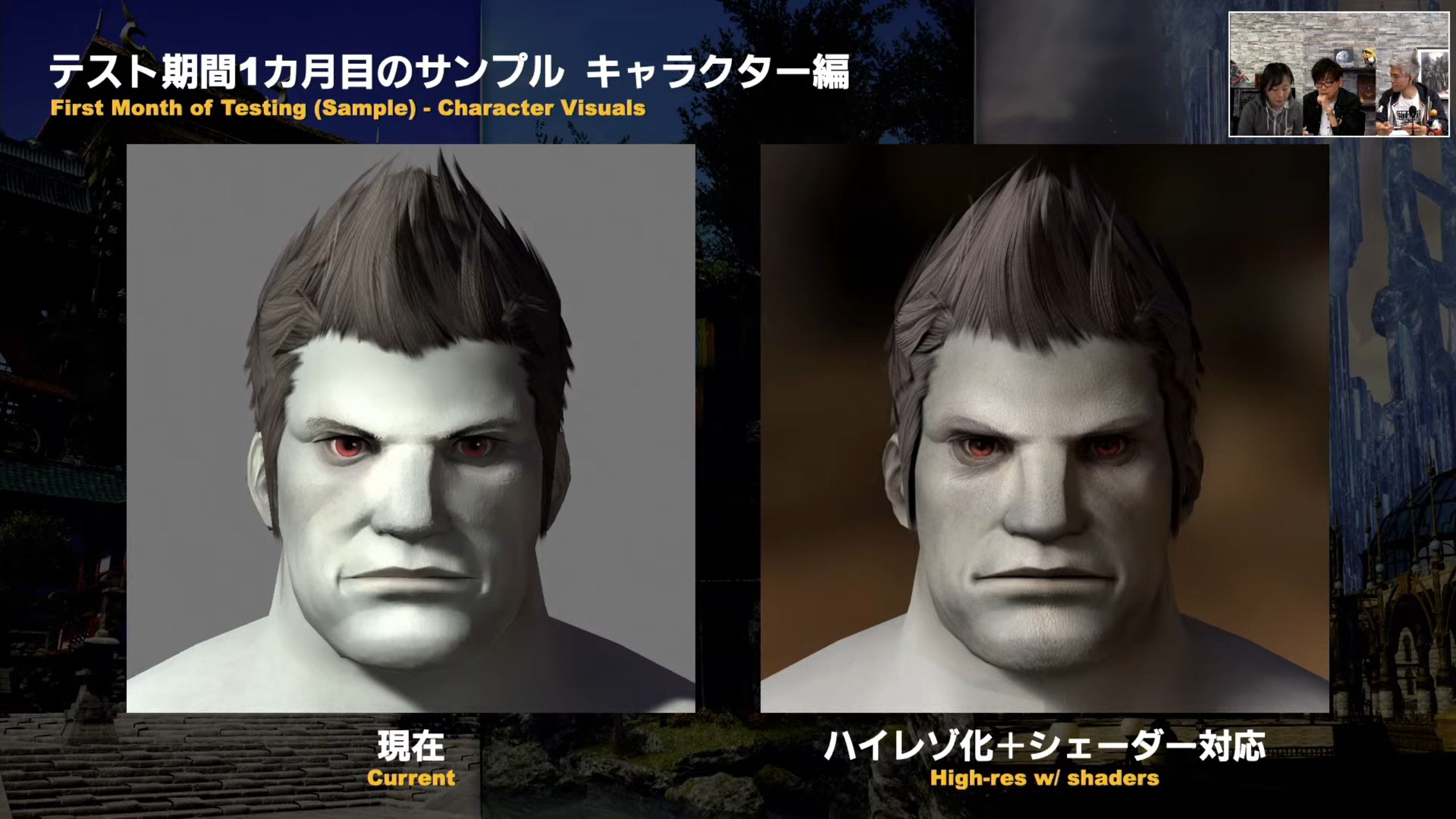 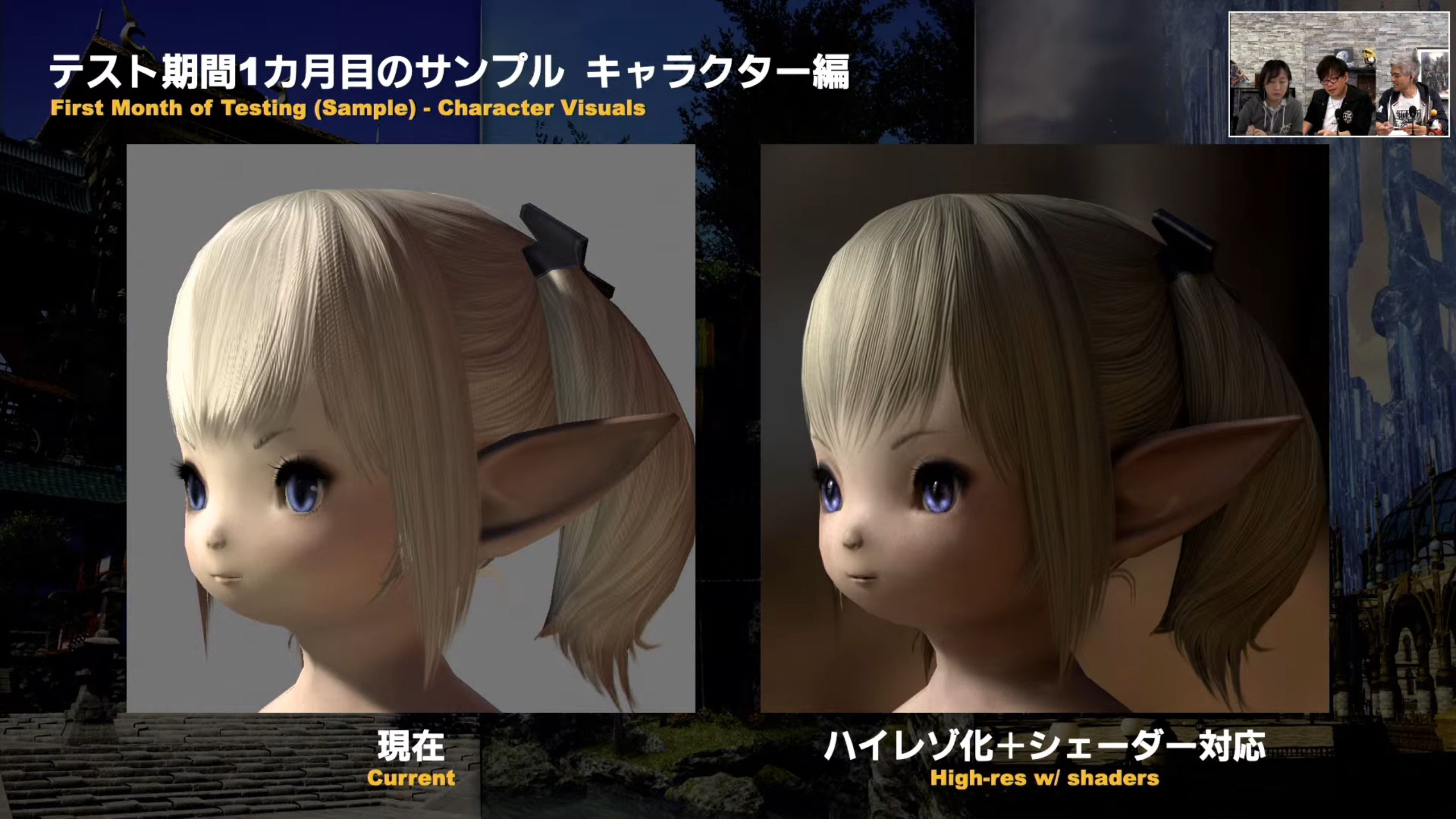 More information may come perhaps at a following fanfest. Below you can read the primary features and goals of the graphics update.

It’s important to mention that the intention is to change the overall appearance of your characters as little as possible.

Not all of the gear will be converted by 7.0. All of the new gear will come with the new quality and popular glamors will have a higher priority, but the rest will come later during the 7.x series of patches.

The conversion of NPCs will also be gradual. Of course, NPCs that are made with elements that are common to playable characters will get their update at the same time. 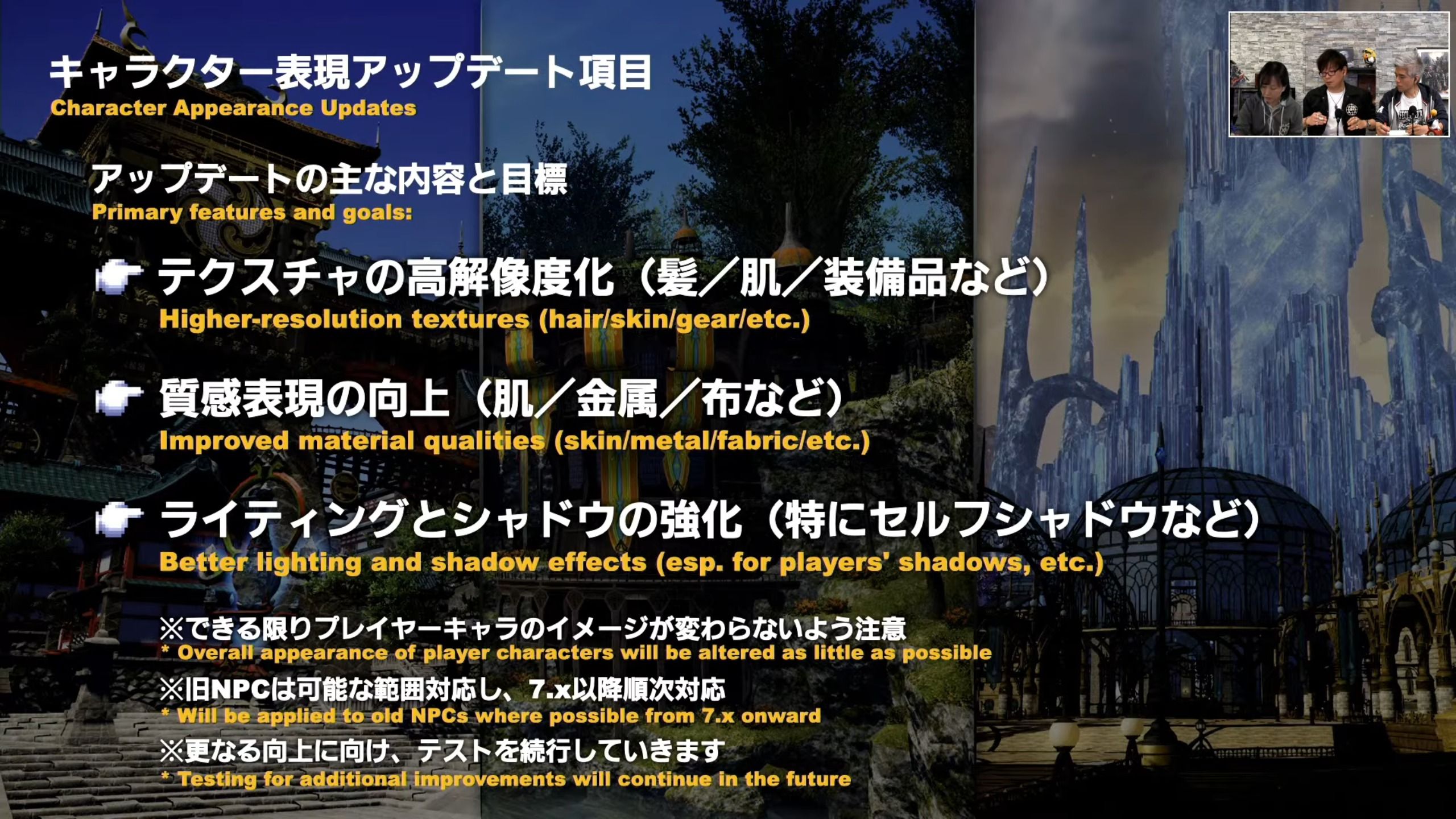 We then get to see a test for the environment, simply adding more lights without touching textures or materials. 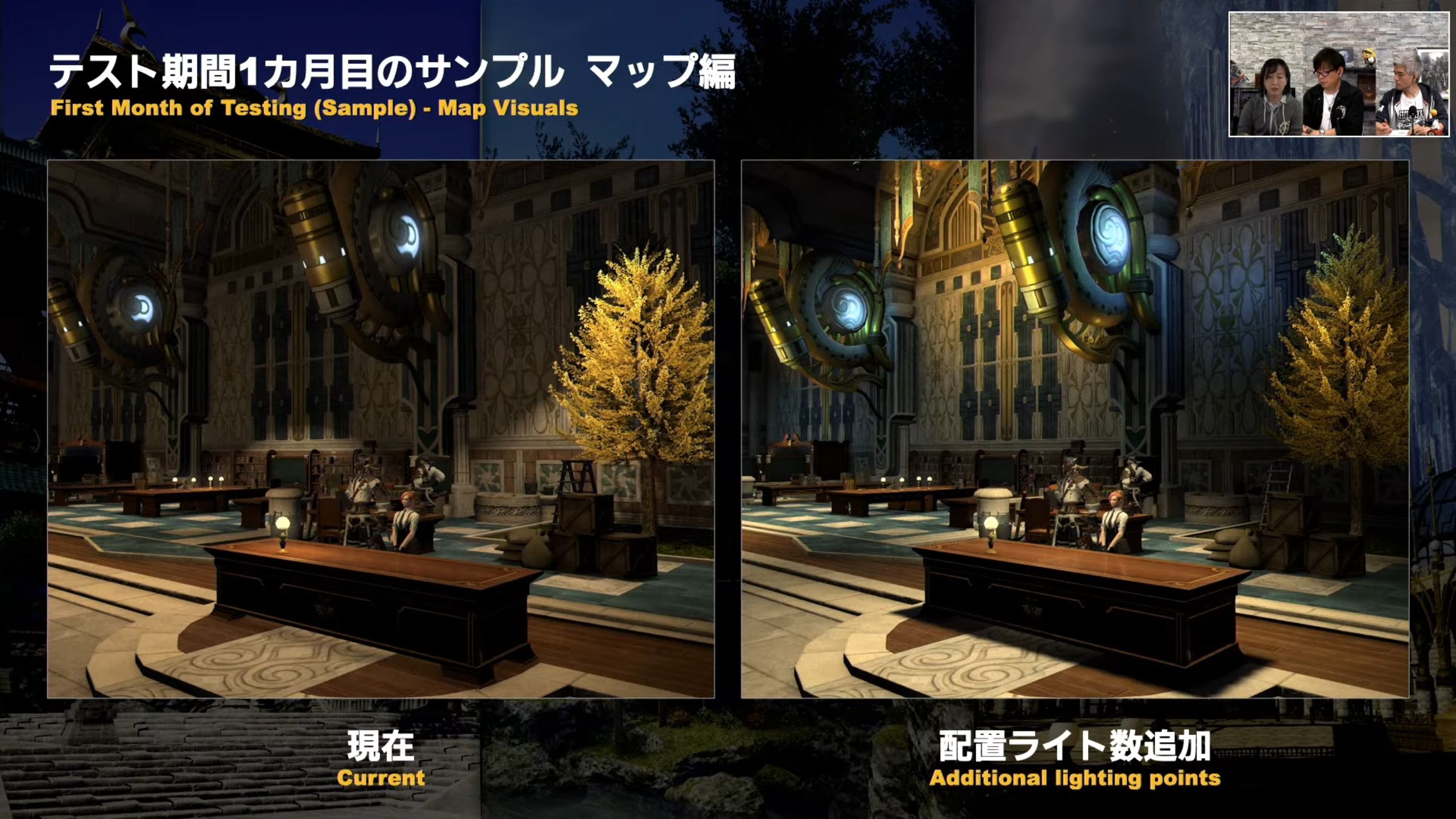 Next is a look at Titania with improved shadows resolution. More lights have also been added and their colors have been tweaked.

This is just an example to make a point, as the team will try to keep the overall mood of the scenes. 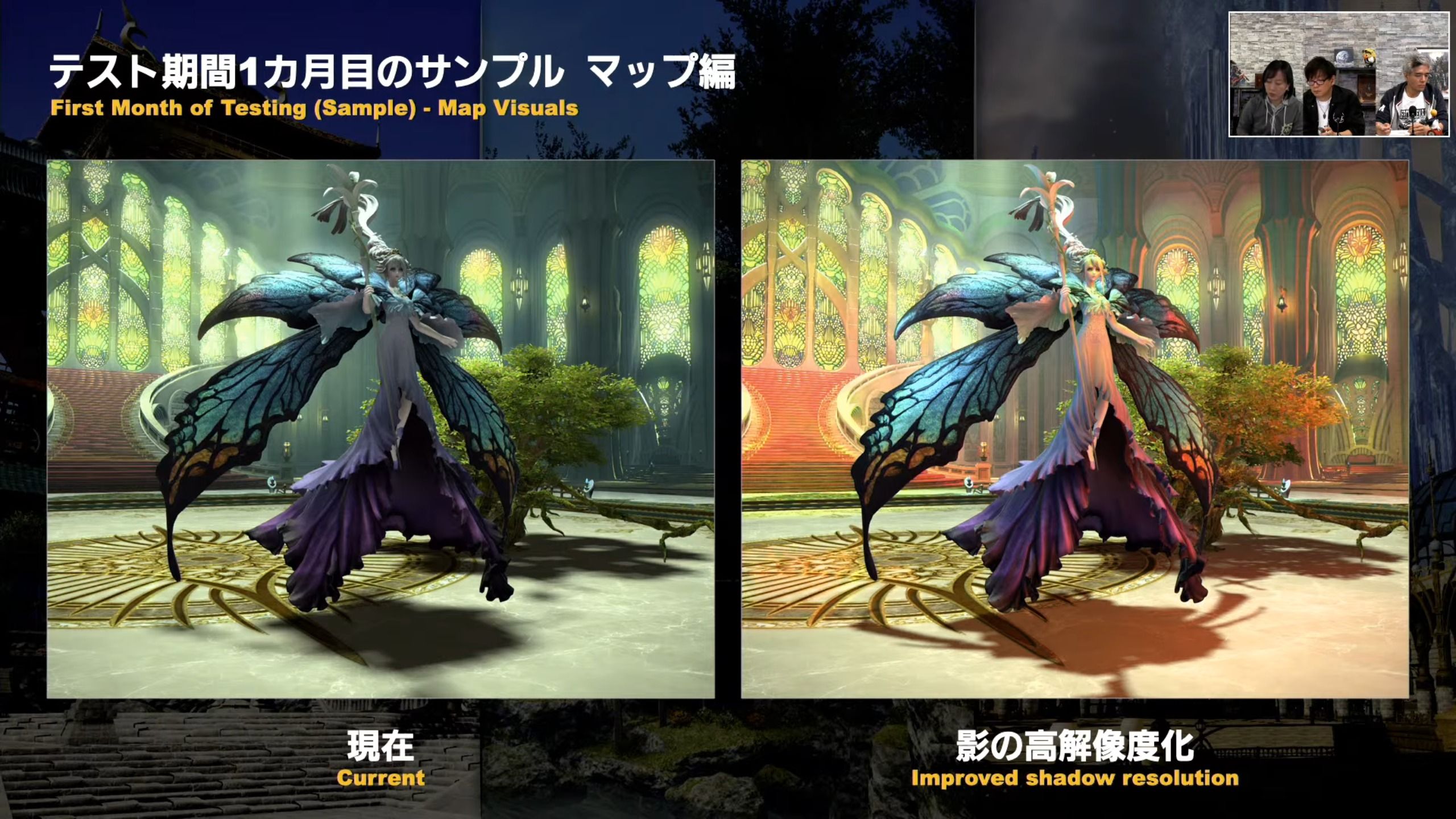 The next example is an improvement of metallic surfaces. This is again an example, and not what the designer may choose. 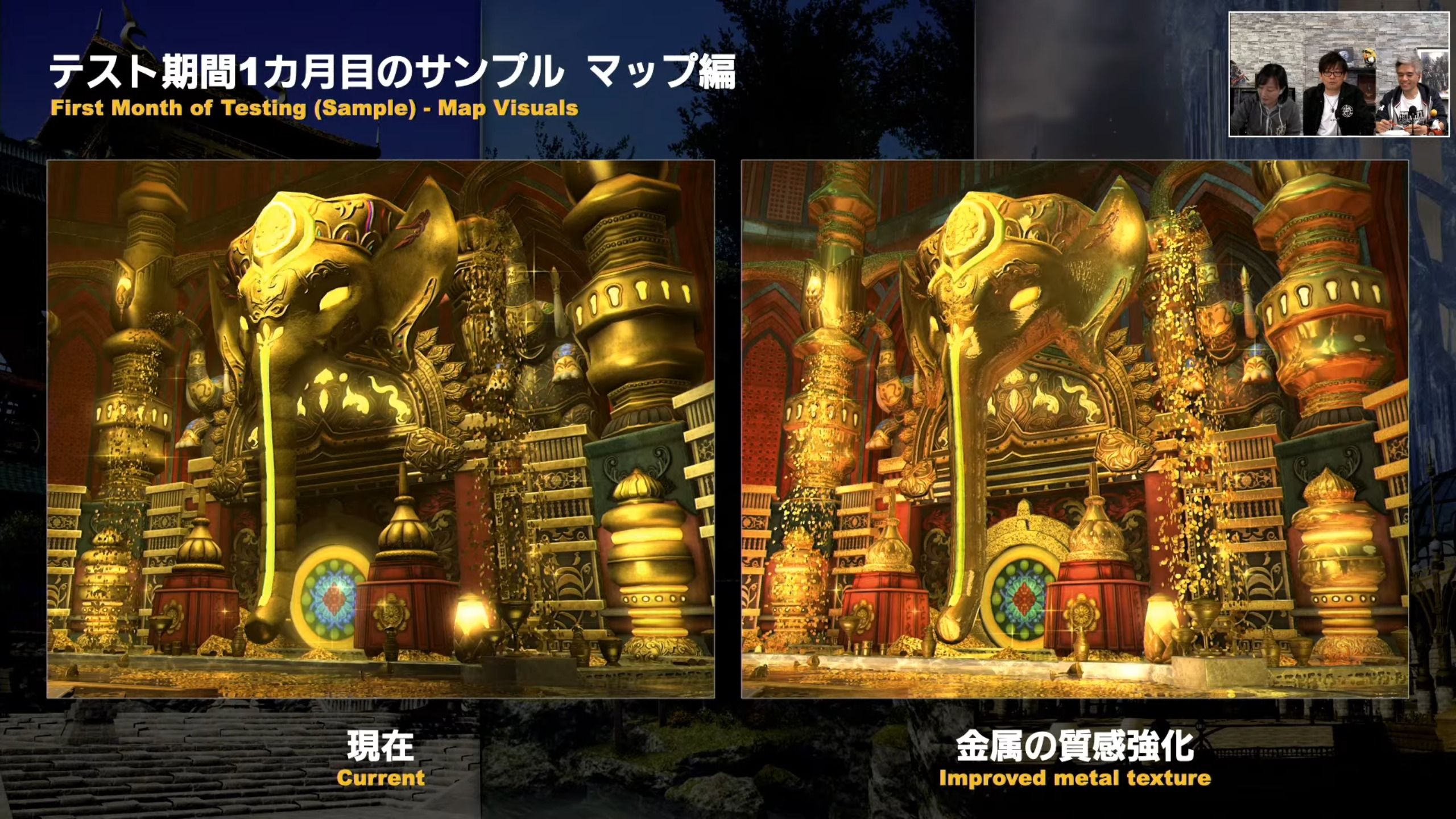 Another example shows an environment with more objects, which is achievable with more memory resources. This helps make the environments feel more lived-in and enhances immersion. 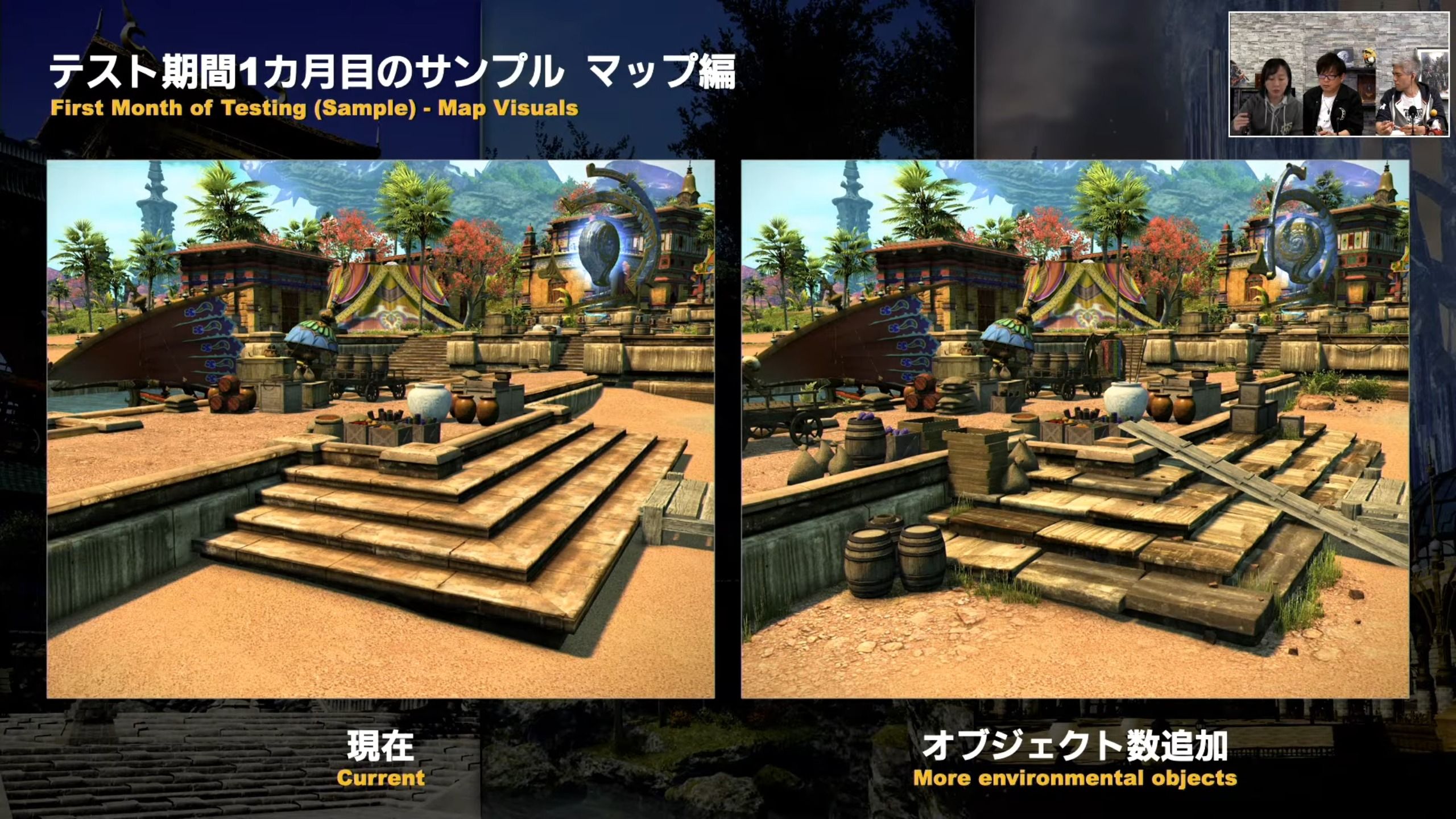 We also take a look at the improved foliage, thanks to higher resolution. Variety will also be improved and the whole grass generation system will be replaced, so this will apply across the whole Final Fantasy XIV world. 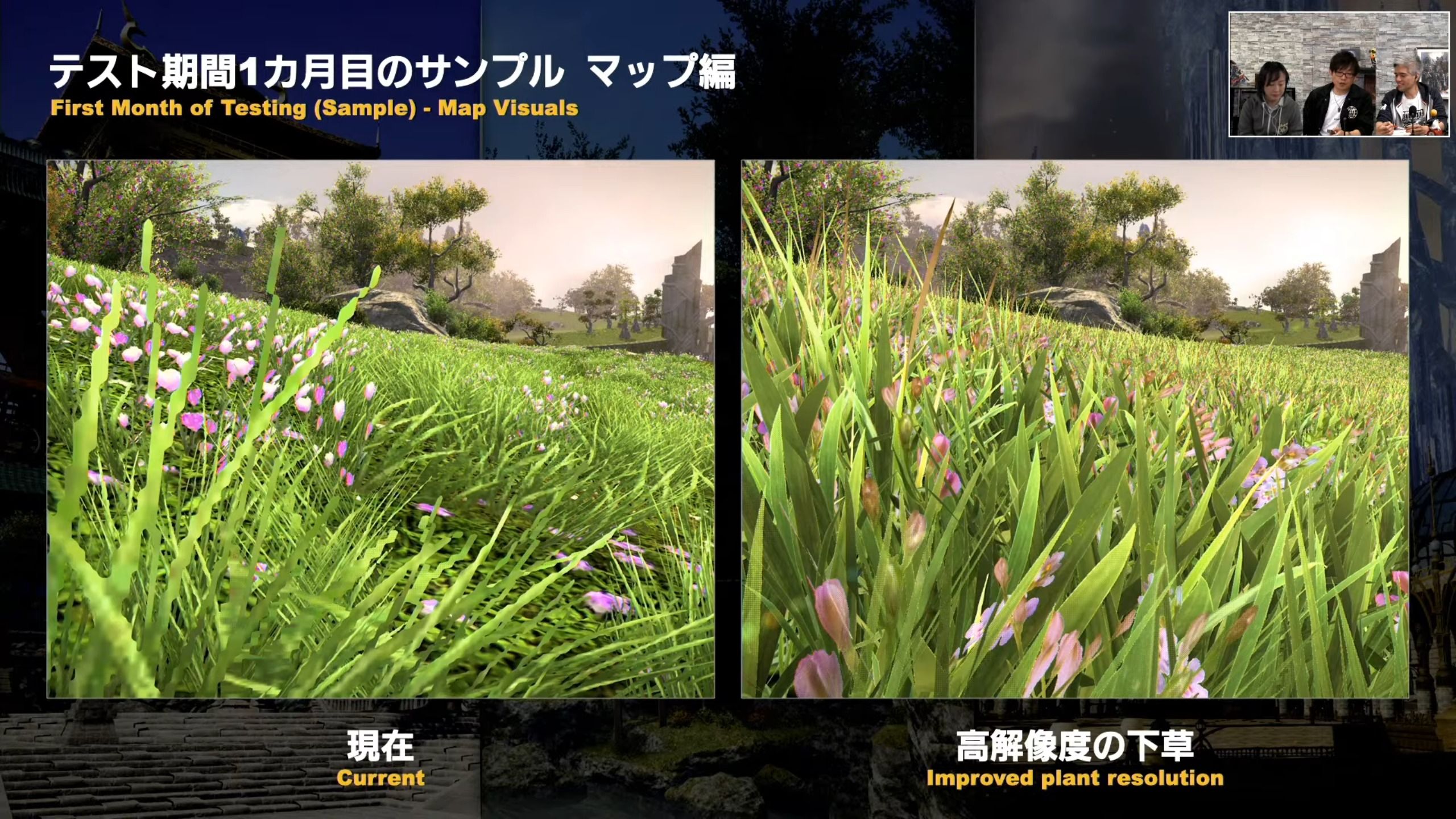 Below you can read a summary of what we can expect from the environmental improvements. Other effects like ambient occlusion and fogs are being tested. 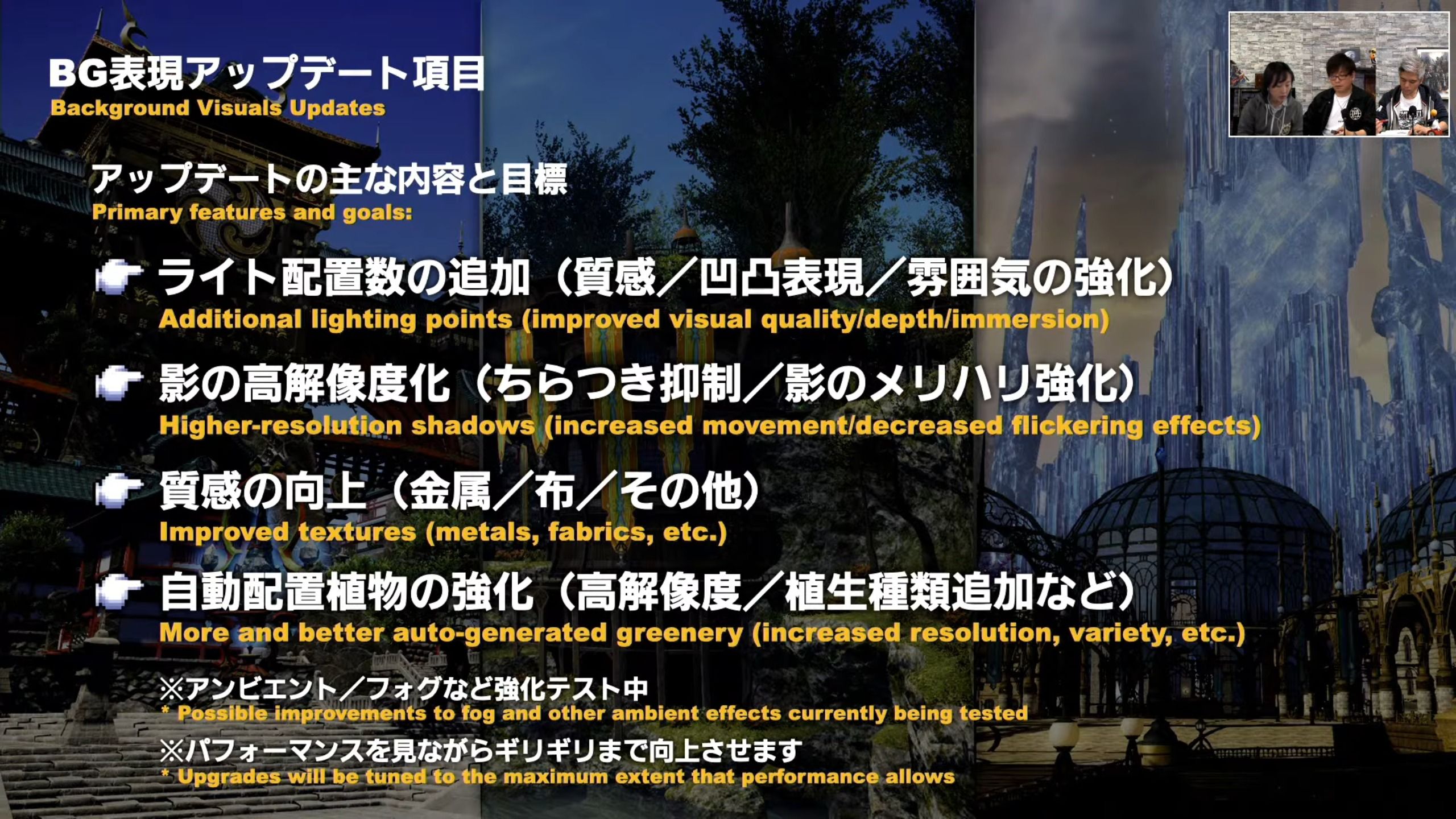